The Berger family of gunmakers is another extensive one with a long history undoubtedly with many seperate branches, if they are related at all. To start with, Eugene Heer in his book Der Neue Støckel lists the following-

Berger– Köthen (Coethen), Anhalt./D, erw 1844-50. Hofbüchsenmacher (we will return to this branch of the Berger’s later)

I wish to thank my good friends Axel Eichendorff, Karl Pape and Bernd Kellner for most of the following facts which I put into my own words.

The known story of the Berger’s in Cöthen (Köthen) begins with Andreas Berger who was the forester to the Princes in Pless which is today part of Poland. (up to 1847 the Duchy Pless belonged to a branch of the House of Anhalt-Köthen).

His son Friedrich Wilhelm Berger founded a gunmaking business in 1827 and was from 1845 located “on the wall” in Cöthen. He was a gunsmith to the Court. Friedrich was born in Wessola- Prussia where the family was located for a short time. He crafted a set of 5 percussion guns for the Ornithologist Naumann being 3 shotguns with extra long barrels, 1 shotgun with a short barrel and 1 short barreled rifle. On Sept. 18th 1850 he advertised in the Cöthner Tageszeitung that he had for sale the following- 2 shotguns, 2 combination guns, 1 Stalking Rifle, 1 Standbüchse (Target Rifle?) and several pistols. Friedrich passed away around 1860. His gunmaking business was carried on by his son Rudolph.

Rudolph (Rudolf) Berger followed his father in the gunmaking business and surpassed him by developing a breechloading hammerless action which initially was a needlefire but eventually became a “Base Fire” or center fire gun which due to being the weapon of choice for Prince Heinrich XI of Pless became known as Fürst Pless guns. (more will be said about this later).

Axel Eichendorff wrote the following which originaly appeared on the “Nitro Express” forum and is used with Axel’s kind permission- “During his traveling years, then necessary for becoming a “Master”, Rudolph worked for some time at the Paris shop of Gastinne-Renette, where he became acquanted with Renette’s slide and drop, outside primed breech loading action. Albert Henry Marie Renette obtained two French patents for outside primed guns with slide and drop actions in 1820, way before Lefaucheux’ invention of the break open gun in 1834. Such capping breechloaders were called “Schnelladegewhre”=quick loading guns in Germany. In 1853 Renette’s son in law and partner Louis Julien Gastinne obtained French patent No. 9058, showing this breech action on a hammer gun, intended to use inside-primed centerfire cartridges. Subsequently the patent agent Auguste Edourd Loradoux Bellford patented the same thing in Great Britain, patent No. 2778 of 1853. Bellford assigned this British patent to Charles Lancaster, London. Lancaster popularized this hammer slide and drop action using the base fire cartridge. Today Renette’s basic slide and drop action is most often ascribed to teschner / Collath, as the Collaths of the Teschner Company used this breech action on their guns up to the 1930’s.”

Rudolph had returned to Köthen in 1859 and took over his father’s shop at Wallstraße 19. ( as reported in the 1873 Handbook of Industry Vol. 2 which also states that the shops workforce included 10 people). Between 1865 and 1881 he received numerous medals in both Gold and Silver for his products on exhibition. In 1873 he exhibited in the Vienna Worlds Fair.  In January 1859 Rudolph was issued a Anhalt/Prussian Patent for his needlefire gun design.  This and his subsequent Patent of Nov. 1860 combined Renette’s slide and drop action with his design of straight line strikers (needles) with coil springs. He also adopted Chassepot’s rubber obturation seals to the breech of his needlefires. In the late 1860’s early 1870’s needlefires became obsolete and Rudolph redesigned his action to use the modern centerfire cartridges of the Schneider-Daw type. About this same time other hammerless actions were also being developed on the Continent and in Great Britian such as the Daw Action. When these were made by the German Craftsmen such as Barella, J. P. Sauer & Sohn, etc. they were also sometimes referred to as Fürst Pleß Gewehre even though they did not use Berger’s design with straight line strikers powered by coil springs.

The Berger actioned guns using center fire ammunition became the favorites of Hans Heinrich XI, Count von Hochberg, Prince of Pless, Freiherr von Fürstenstein. He was the Prussian Court Jägermeister from 1872 to 1891. He was so influential in promoting Berger’s guns that the design became known as Fürst Pless Gewehre or Fürst Pless Guns. Other well known makers also produced guns on the Berger design and as early as October 1866 Heinrich Barella of Berlin advertised in Illustrirte Zeitung that he was making and selling Fürst Pleß Gewehre.

It is Axel Eichendorff’s opinion that Rudolph Berger had most of his guns of his design made by the Suhl gun trade to his specifications. Rudolph passed away in 1894.

Other gun makers such Rempt and Barella adopted Berger’s in line coil spring locks with the more conventional break open actions such as the Lefaucheux and Roux. Barella also made a variation using a flat spring powered hammer which drove the straight line striker or firing pin. Click Here to see a 1868 article about that from the leipzig illustrirte Zeitung.

A. Berger– Magdeburg. We do not know what his first name is and what his relationship was to Rudolph Berger. It is speculated that he may be Rudolph’s son and if so that his name may have been  Andreas after his Great Grandfather. At that time they had a penchent for using names of ancestors. He definetely made Fürst Pless guns on Rudolph’s design as shown by the shotgun recently sold by Joh. Springer’s Erben shown below. His address in Madgeburg was Bahnhofstraß 25-27. In 1884 he was mentioned as “Berger-Waffen”. He regularly advertised in the Berlin publication Beiblatt zum Kladderadatsch of 1877. A group of those ads follow. It is interesting to note that Heinrich Barella started out in and worked in Madgeburg before moving to Berlin. 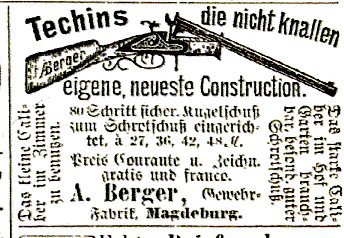 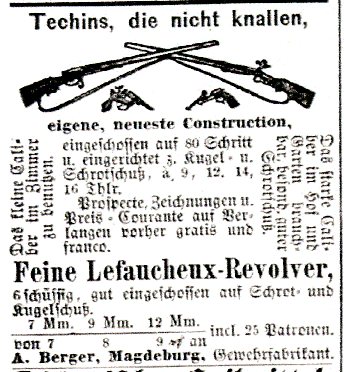 This page is a work in Progress. Please return for additions.