A work in progress!

Frederick William Hollender was born on July 13, 1887 to Frederick Emil Hollender (1830-1884) and Hermina Steiger (1858-  ) . In the 1910 New York City Directory Frederick Hollander & Co.  was listed as a Beer importer at 123 Lafayette St. With the outbreak of World War I he lost his source of Beer from Germany and in the 1925 City Directory he was listed as Gem Importer at 245 Canal St. He was an active importer of Guns from the August Schuler Co. in Suhl and had them build guns to his specific requirements or the requirements of his customers. The 1945-1949 issue of the Sports Afield Hunting Annual contained an article titled “Lion Hunt Deluxe” which he wrote. He was an enthusiastic Big Game hunter who traveled the World in pursuit of his quarry. 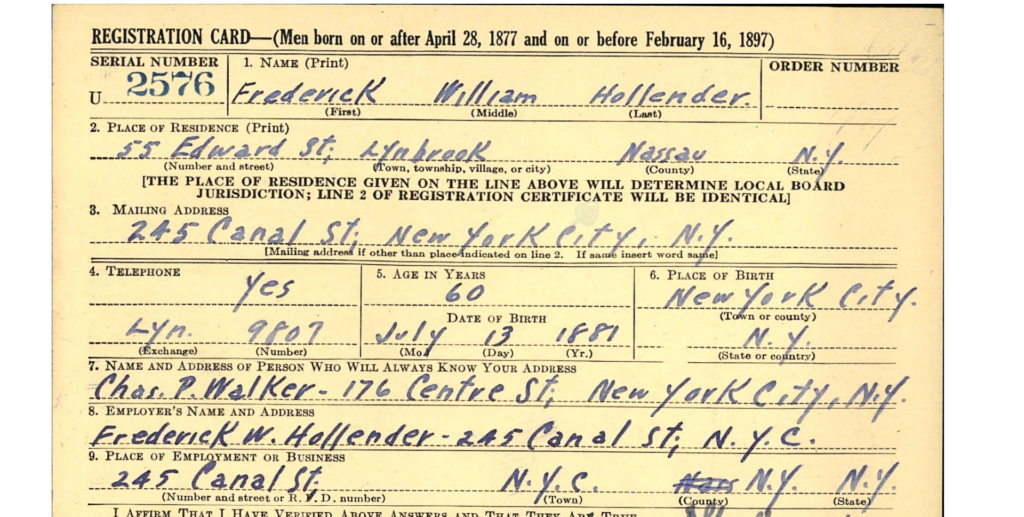 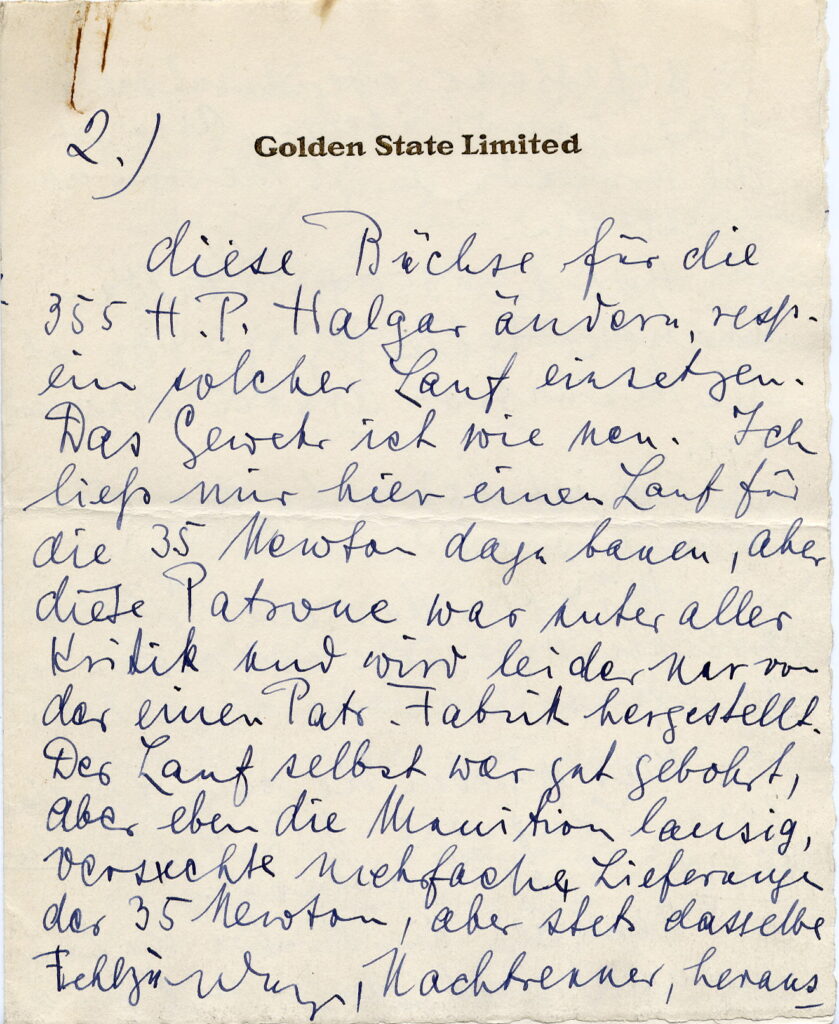 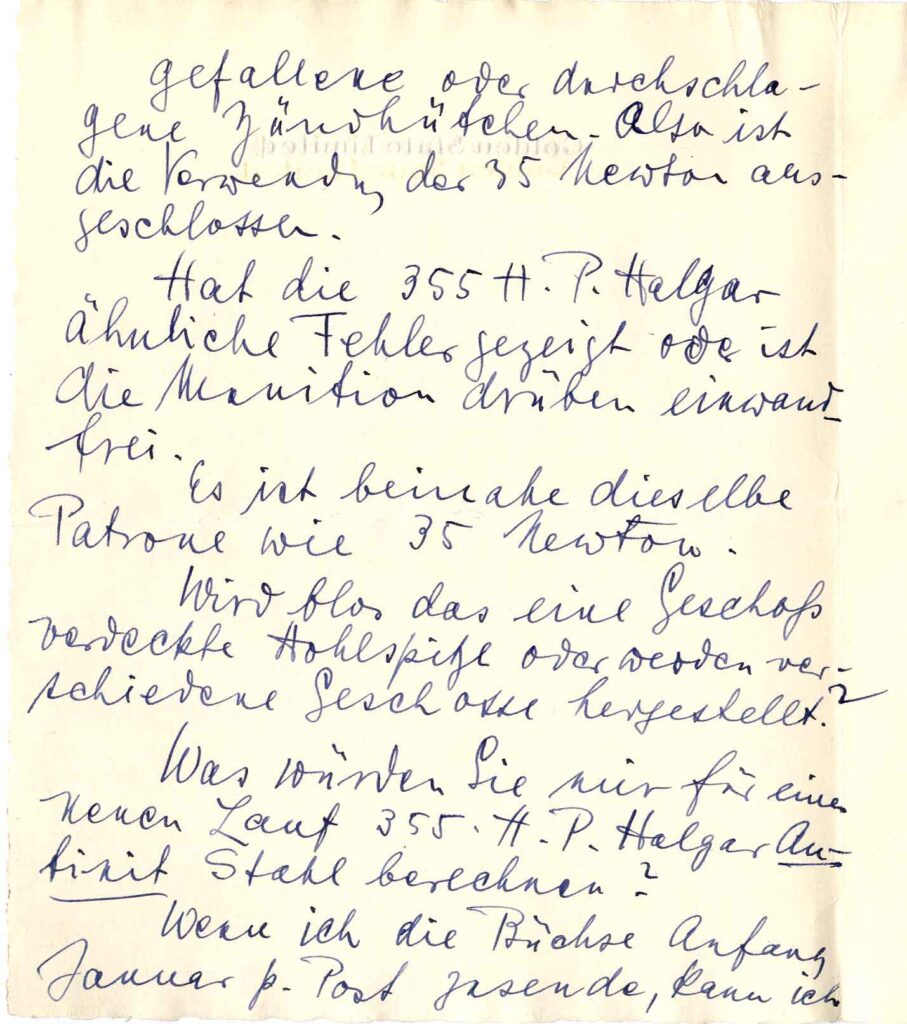 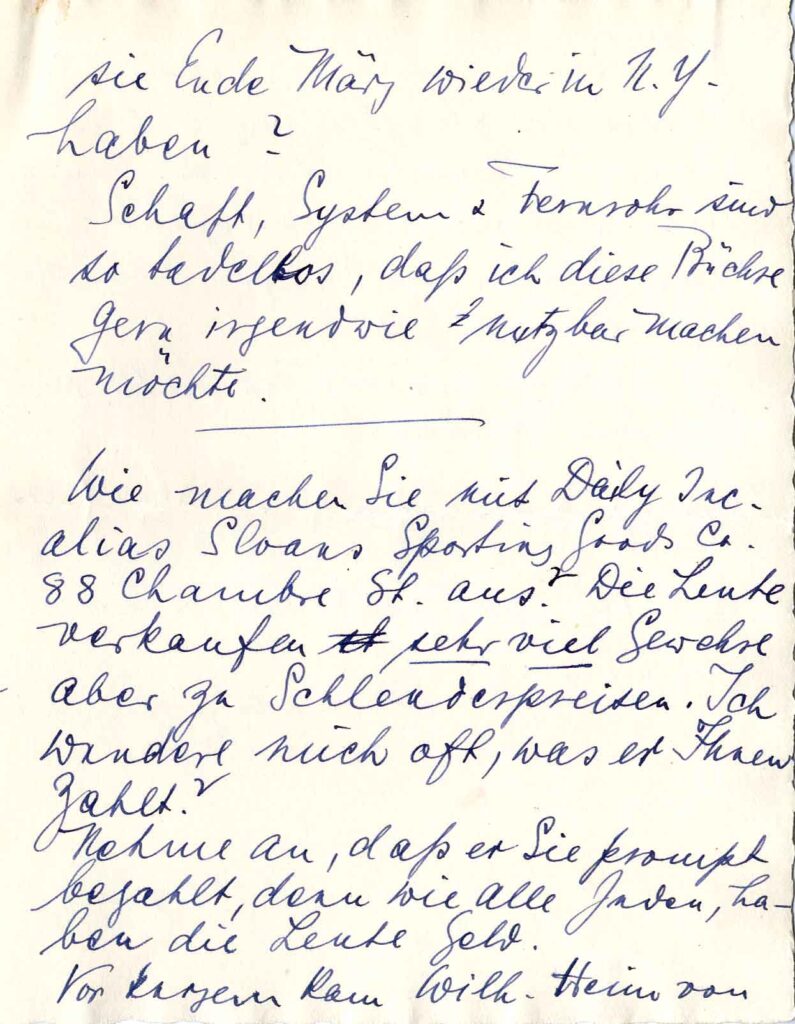 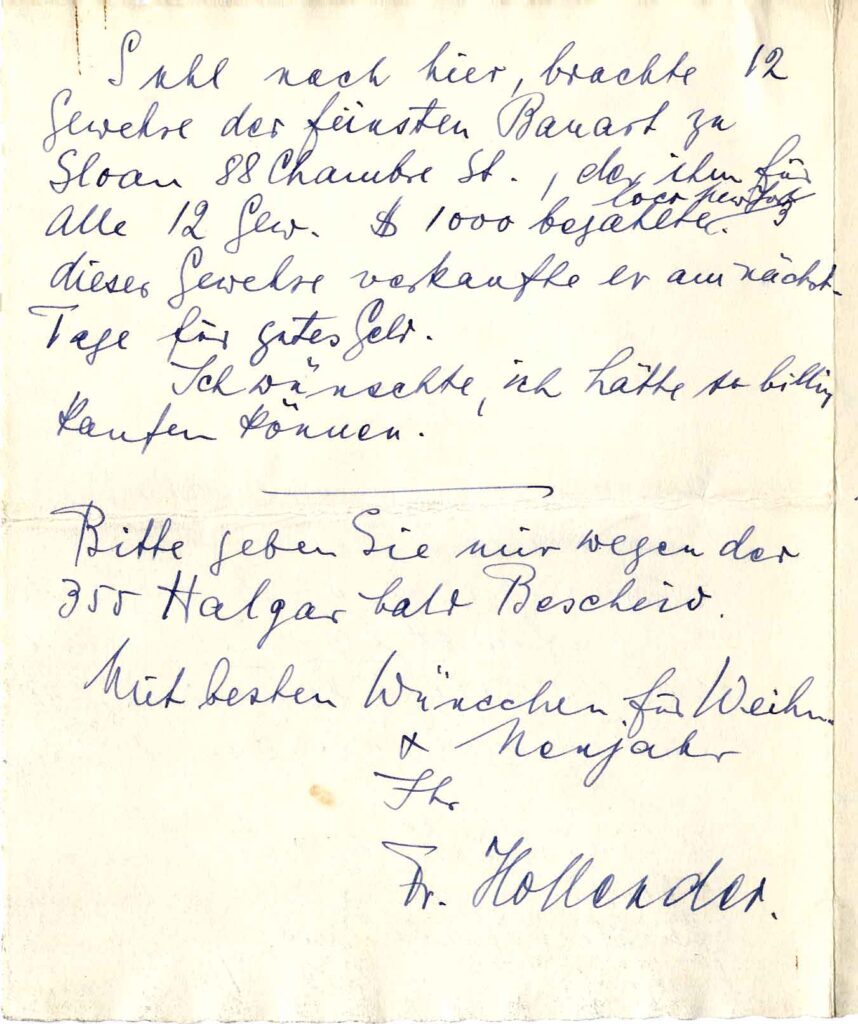 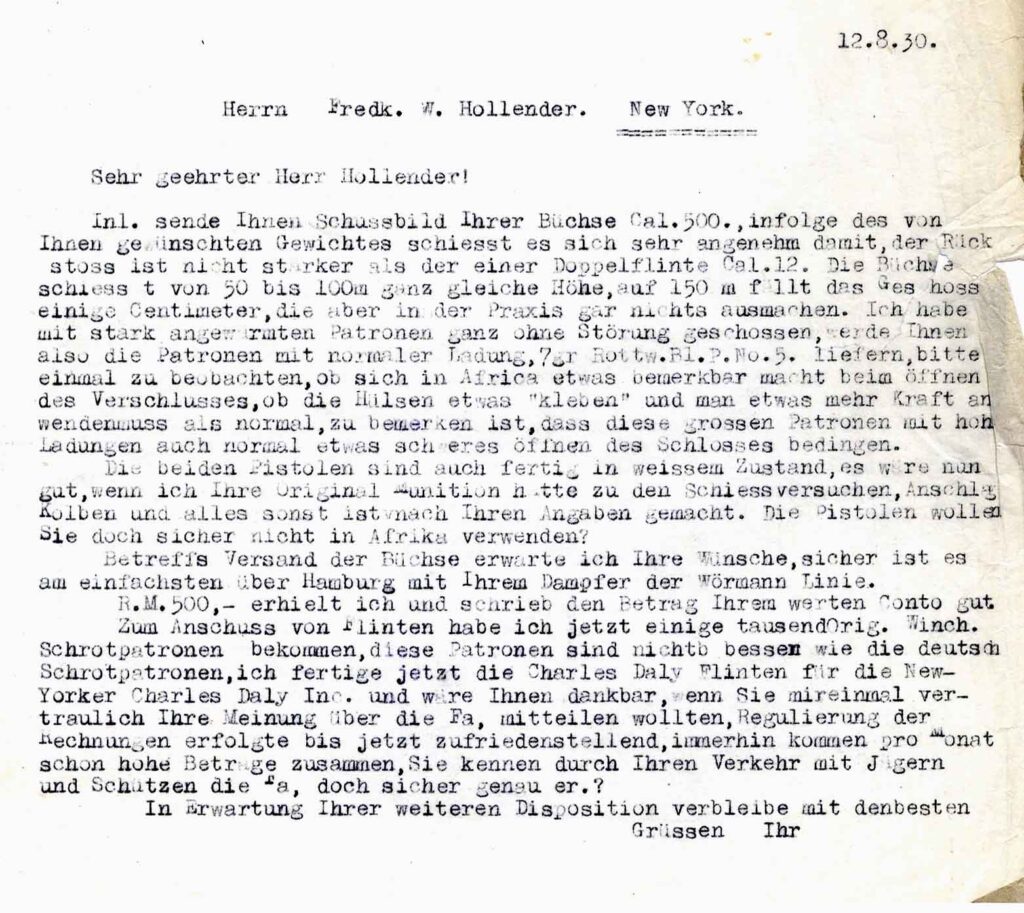 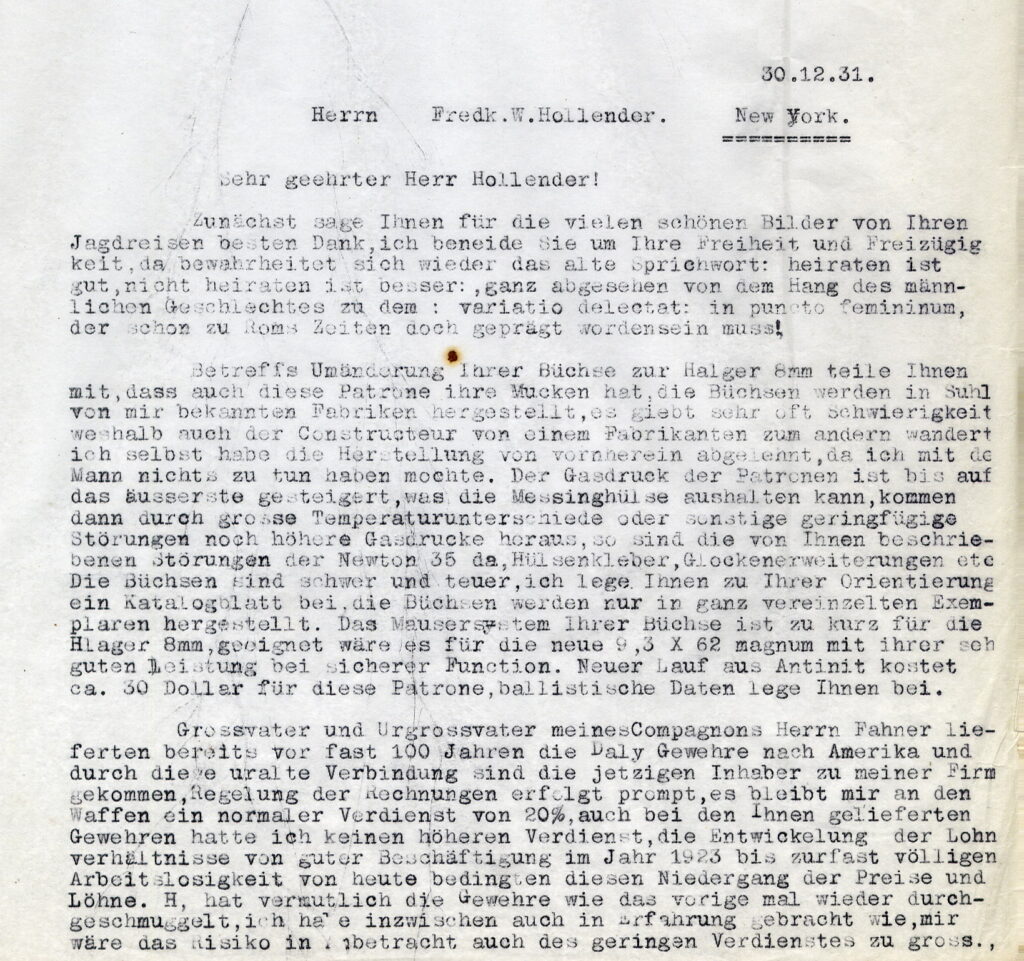 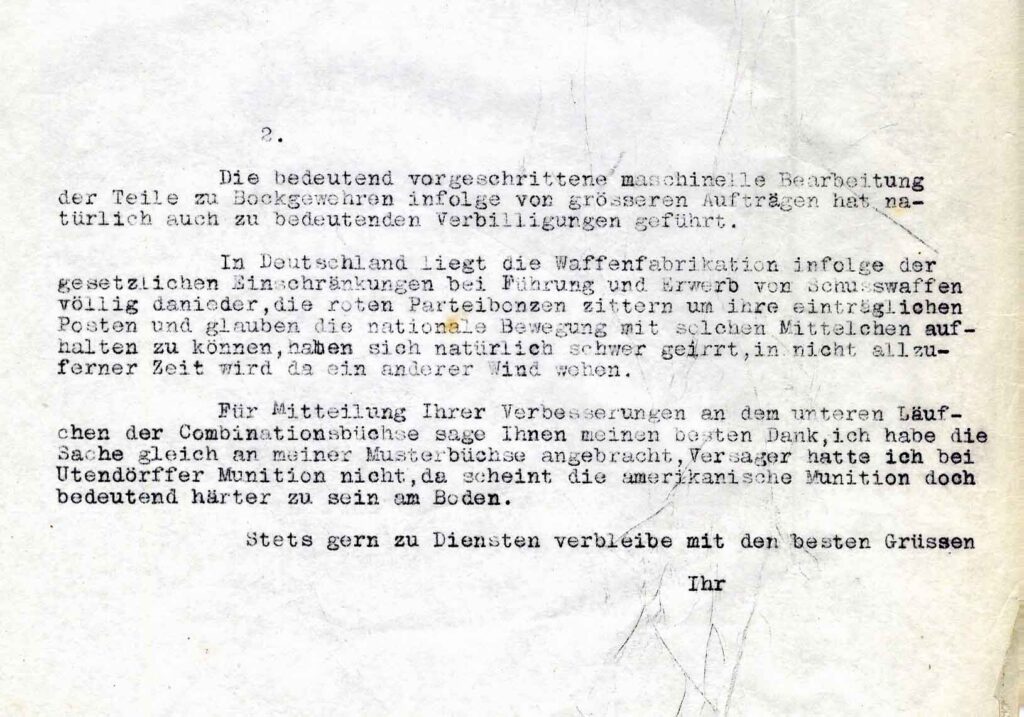 The following images show a custom single shot JagdKarabine made by August Schuler on the Model 1893 Langenhan break action pistol with a 16 inch barrel chambered for the 5.6x35mm cartridge and detachable shoulder stock. It was proofed in May 1931. The scope has Schuler mounts. Following the images are some of Fred Hollender’s correspondence with August Schüler concerning this and two other similar pistols Hollender ordered. I sincerely thank Axel Pantermuhl in Germany for sharing the letters and transcribing them for us. 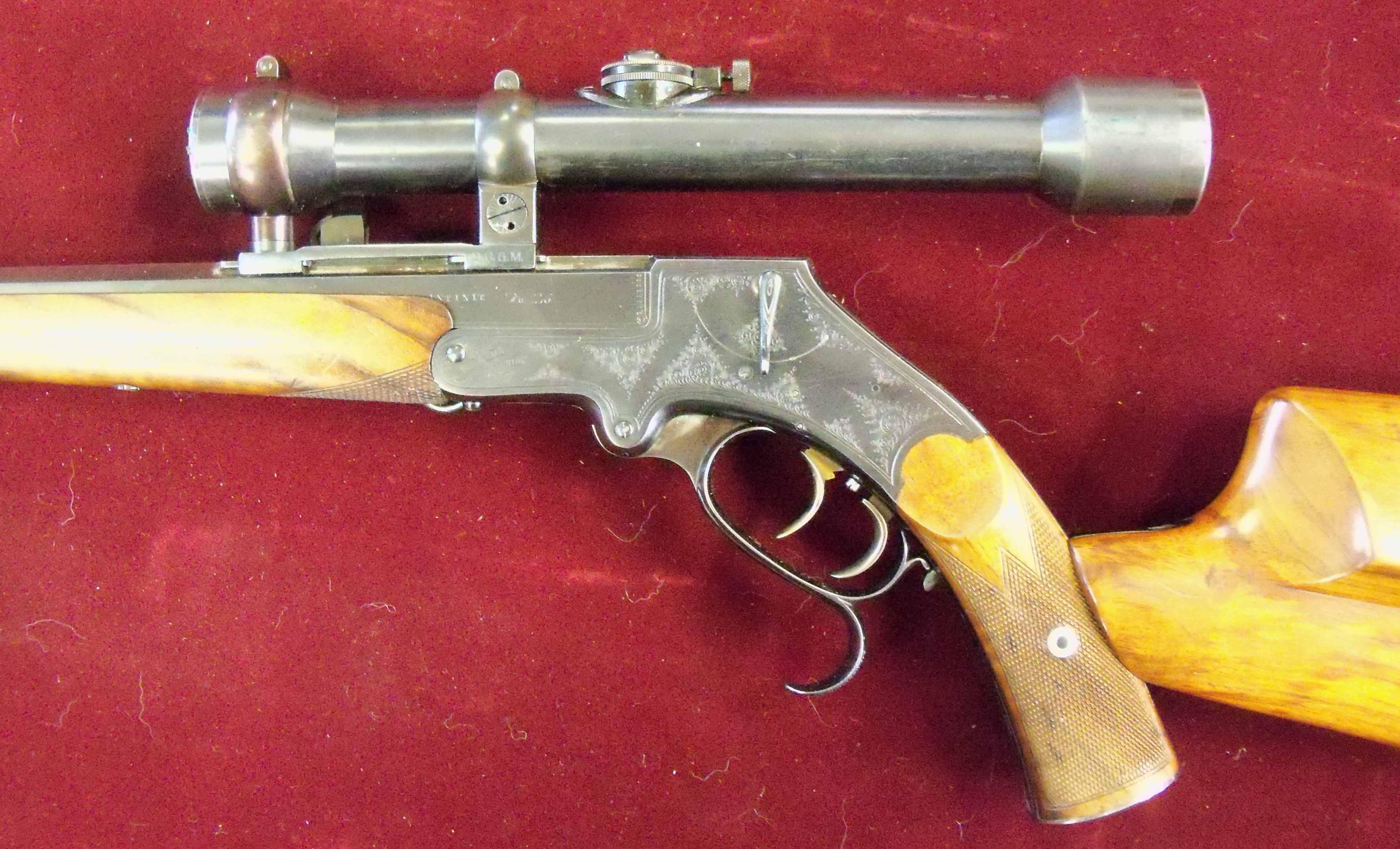 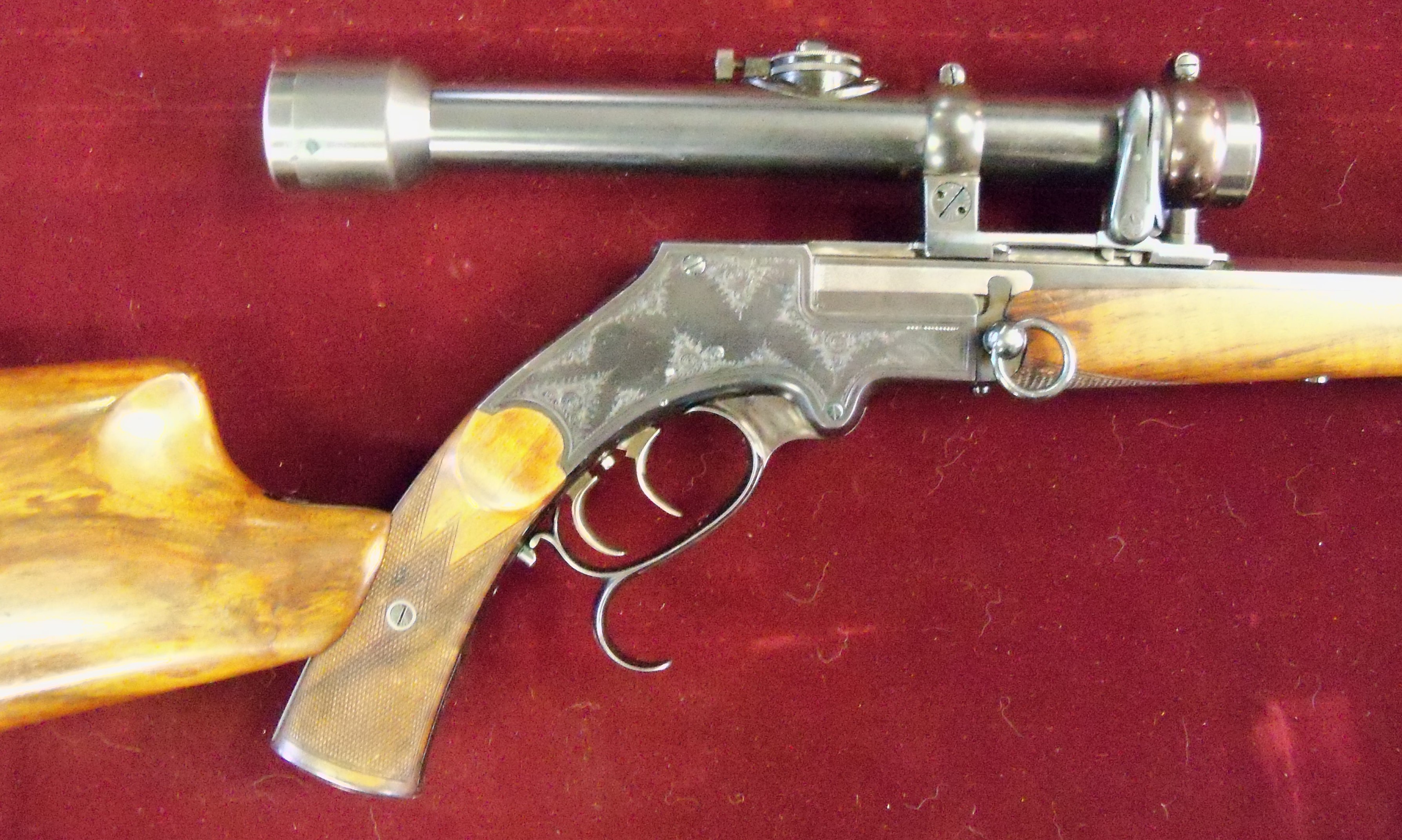 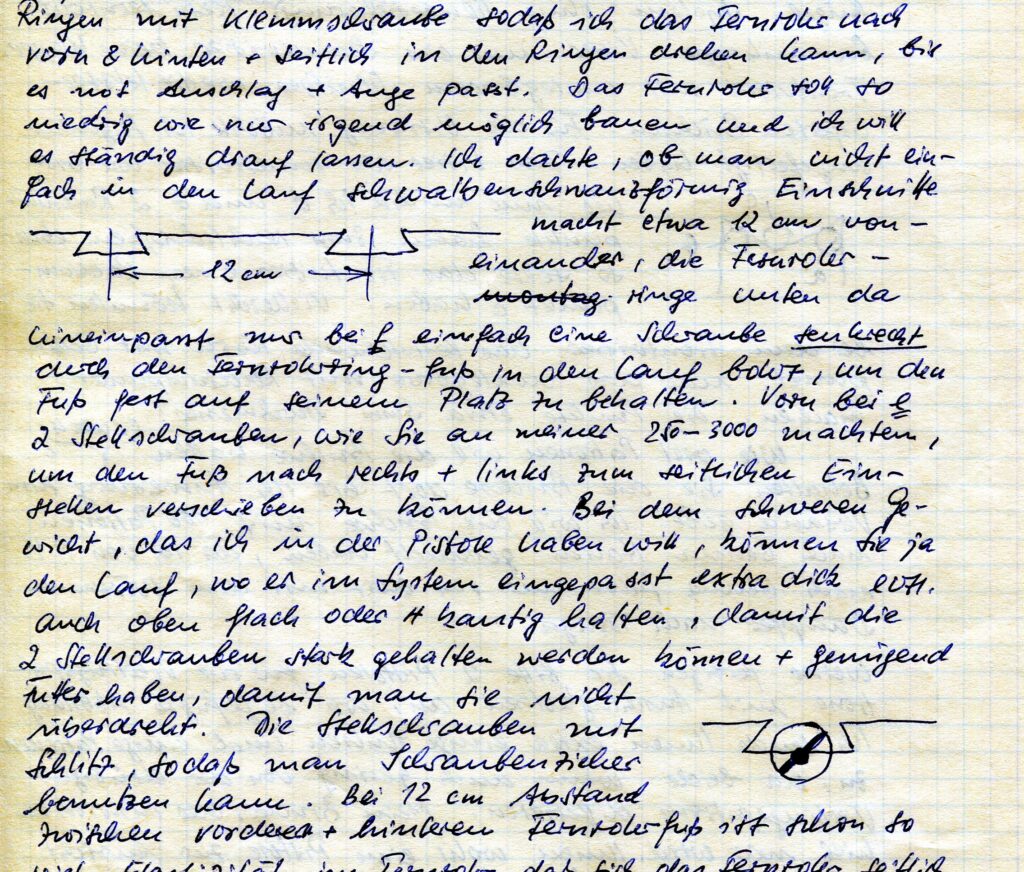 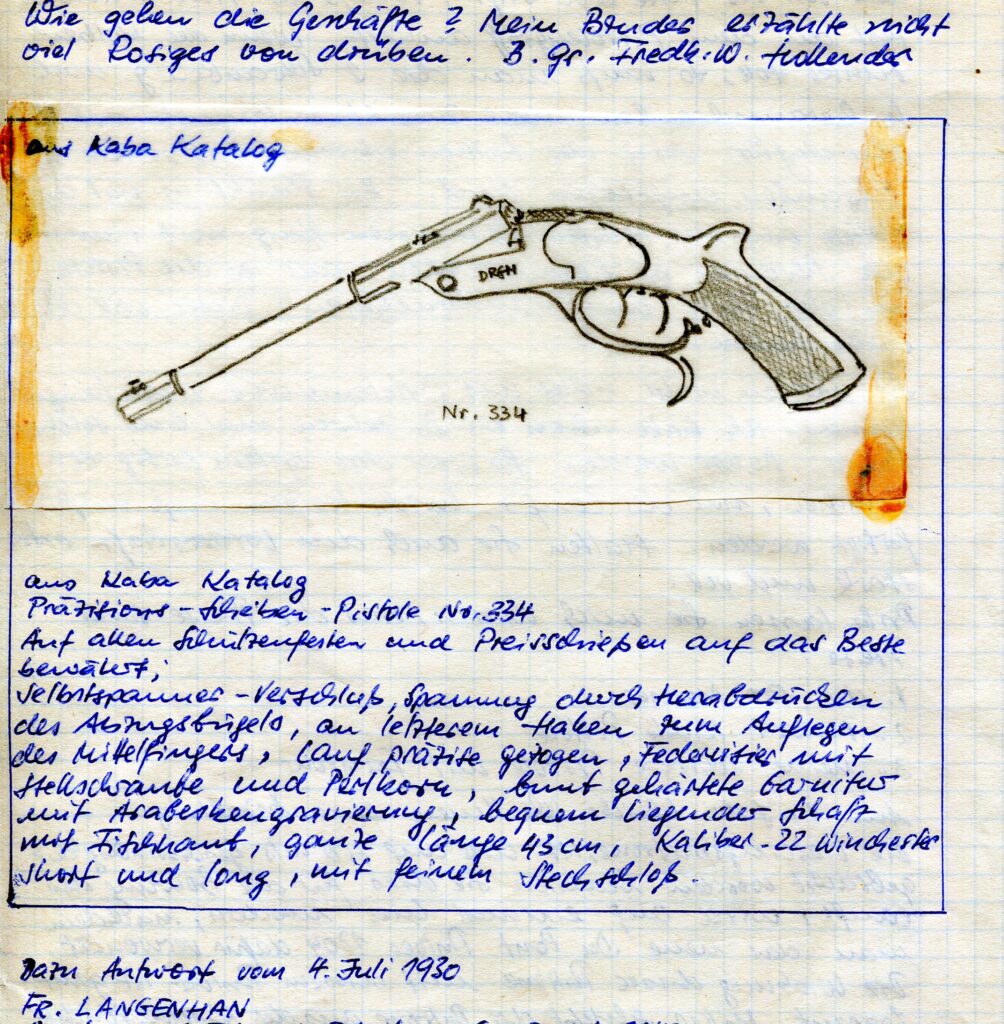 Following is a rough translation of the above letter-

Finally I come to write to you again and answer your lines of 25.2.30.

For my trip to Africa please make me a Schler .500 Repeater soon. Please this rifle quite heavy, so that you can bear he recoil better, 14 American pounds should be considered a minimum. Hollender stock extra strong. Barrel length 22 or 24 inches. trigger without set, with 5 pounds of deductable? resistance. Sling swivel, target system without sliding leaf. No scope. Rubber butt plate, rear sight only a standing leaf, no folding leaf. Front sight with a removable protector (hood), like the last delivered rifles. For the sight picture I would like to have made the following, The sight as an open sight as before, only I want to have a and b two radium points for night shooting as well should the front sight have a radium point c.

Perhaps you could make the fixed grain with Gold dot, only the relegable with radium point, with the front sight. The points about 3mm in diameter.

How many cartridges does the rifle want, 3 or 4? Keep the rifle there until I give instructions for shipping. I want to send the rifle with 100 cartridges to genoa, Italy, as I am traveling from N.Y. to Genoa and from ther with the Wörmann steamer to Tanga.

Please make 2 pistols for the Vierling cartridge (5.6x35R) with bullet as attached figure. I’ll send you some cases and some cartridges, as both differ, albeit slightly, from the Hornet? cartridge. My brother, who has been here by now, will probably have sent you a pistol to view. It has Roux closure.

A pistol is supposed to be for Frer. Miller. Barrel Antinite 16 inches. Set Trigger, no sights, no scope. Just leave the dovetail slots e and f on the barrel top flat about 1/2 cm wide and 10 cm long, so that a scope can be mounted. Mr. Miller has the scope & assembly here that he wants to use. Weight 4-5 american pounds. Price?

The other pistol is supposed to be for me. Execution as shown in figure. Barrel 16 inches long. At the muzzle 2 cm diameter. I want the gun to be quite heavy, so that with the scope weighs at least 7 English pounds, does not weigh less than 7 pounds. Barrel Antinit extra strong only well drilled with the very best shooting performance. Rifle scope with fine cross hairs , not soldered on but in rings with clamping screws so that I can turn the scope forwards and back and sideways in the rings until it fits with the stop and eye. The scope should be as low as possible and I want to to leave it on all the time. I thought if you don’t just make sledge hammer shaped incisions anout 12 cm from each other, the scope mounts down there just fits at f just a screw centered in through the scope ring-foot drilled into the barrel to keep the foot firmly in place.

Front mount at e , two adjusting screws, as you did on my 250-3000, to be able to move the foot to the right or left for lateral adjustment. With the heavy weight I want to have on the gun, you can keep the barrel, where it fits in the system (receiver) extra thick possibly also flat or 4 angular ?, so that the two adjusting screws can be held strong and have enough threads so that you do not overturn (strip) them. The adjusting screws slotted, so you can use a screw driver.

At 12 cm distance between the front and rear scope bases, there is already a lot of elasticity in the scope that the scope is onthe side, even if it is firmly anchored with a screw at point e. As I said the scope should not be removed.

The removable stock on my brother’s pistol is just a board with a very bad clasp. I want to have a stock mount that is just as strong as with a one piece stock, also a real fastening at g and h each one screw only in the middle a pin, so that the stocks connection is firmly attached to the gun handle. If the stock is to be removed, it is necessary to unscrew the two screws g and h , which takes a little time, but for this stock is absolutely fixed when the screws are tightened. At point m , the gun on the right side has a ring with which you can turn the screw m out just so that you can take apart the gun in the middle. That’s what I want.

You will probably know the gun model for a long time, I had such a pistol 20 years ago. Therefore, you will probably get the system (receiver) ready (already made), only the barrel and loop must be made. alsokeep the forend extra strong and full.

Please let me know what the prices are:

3. My heavy pistol with scope.

On the 1st of the year I will send you a deposit.

The Vierling Cartridge (5.6x35R) has been brought here (the US) to 750m/s speed, note this for the bore of the barrel, suddenly becomes modern here after using the new Du Pont powder 1204 for this. The effect of this cartridge (the .22 Hornet) with this powder is quite striking. Miller shoots the cartridge from the tipping (barrel) rifle (Kipplauf or break open) he has from you. With this tipping rifle, it often happens that when you tip up very quickly and violently- Miller often breaks the rifle over the knee, if it rises hard, then you can hear a spring snapping and the rifle is not tense(cocked)-can not be closed either. You have to remove the fore end first, then it closes again. Can you guess what the error is?

Through  my brother I sent you 6 projectiles of a local cartridge 9mm. Is there a bullet of a same heaviness and caliber over there but with a full jacket? Here only one round is made. It’s Pattern .35 newton. What might cost 1000 pcs of such projectiles with a full jacket and who does that?

how does the shop go? My brother didn’t say much rosy about it.

On July 4, 1930 Fr. Langenhan in Zella-Mehlis responded to a request by Richard Schüler which is interpreted below-

Thank you for your request for two target guns. The number 2515 of the gecado catalogue you mention is my target gun no. 33 D in an earlier model. The pistol is now manufactured in the version shown and described on page 10 of my catalogue of weapons, which is also printed to you, and I would ask you to let us know if you agree with it.

As far as your various special requests are concerned, I am of course in a position to comply with them. The gun does not normally have a safety on the left side, but it could be attached; also, the ring on the hinge pin.

You carry out the scope assembly and I would be right if you also have the scope base made and installed yourself.

I can’t give a price for all these works at the moment, but the same will be quite high after a superficial start. Perhaps you will first send me the promised sketch about the increase for the Scope assembly, etc., I will then make a calculation and get closer to you again.

In the meantime, I recommend to you

Following is another communication from Hollender to Schüler dated March 3, 1931 with the translated transcription to follow. 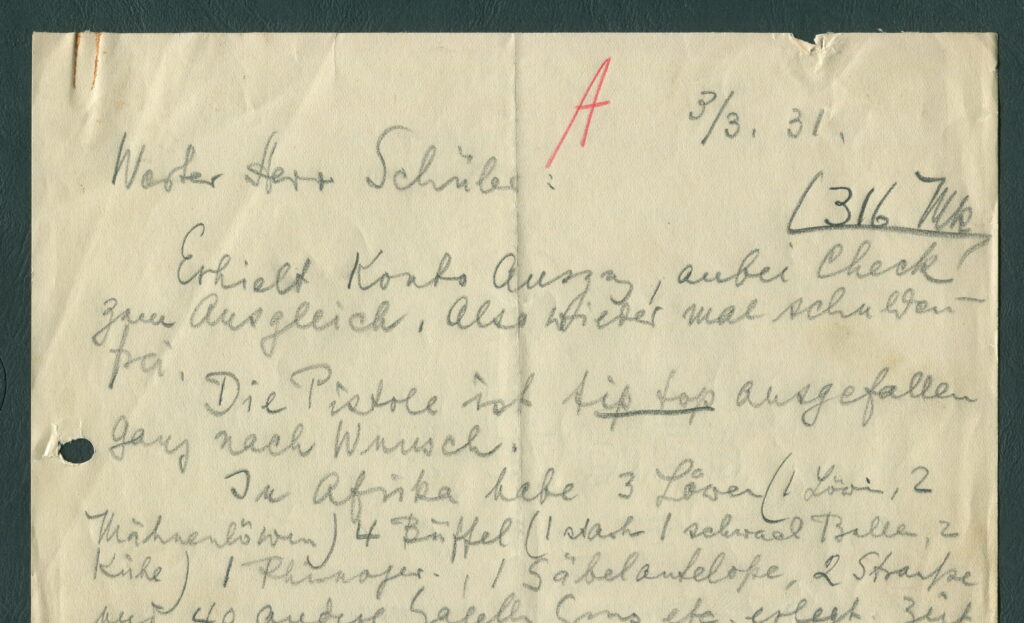 The pistol is tip top, according to your wishes.

On the ship I met an American: Travar Booth, who will be in Paris on March 15 with the address of the American express Co., Rue de Scribe, his New York address: 45 Beachmont Drive, New Rochelle, N.Y.

This gentleman also wants to have a gun, just like you made for Frer. Miller, of which you probably still have the dimensions, for the same cartridge so the 22 a la Vierling cartridge (5.6x35R) the same cartridge from which I had you send 2 boxes, hopefully you have a few more to shoot. 4 F.(power) scope but slightly stronger cross hairs. Scope mount assembly, i.e. the same as chosen by Fred. Miller. Price have indicated $95.00 Finish immediately. The gentleman wants to stay in Paris or Dtschld. from March 15 for 1 month and take the gun with him. He would like to have the bill per forma acknowledged at 75 Dollars bcause of customs.

Send you pictures of Africa from N.Y., I took very nice pictures.