Very little is presently known about Georg Knaak the man, but we do know a little bit about his business- Deutsche Waffenfabrik (German Fire Arm Factory). On the cover page of the September 25, 1890 edition of the paper Das Echo he has an announcement that he had for a long time performed his fine business in quite modest, small rooms and after a while he has, through really real and folklike service,  made it one of the greatest in the country (so he claims).  By this we can determine that he was in business for some time prior to 1890. 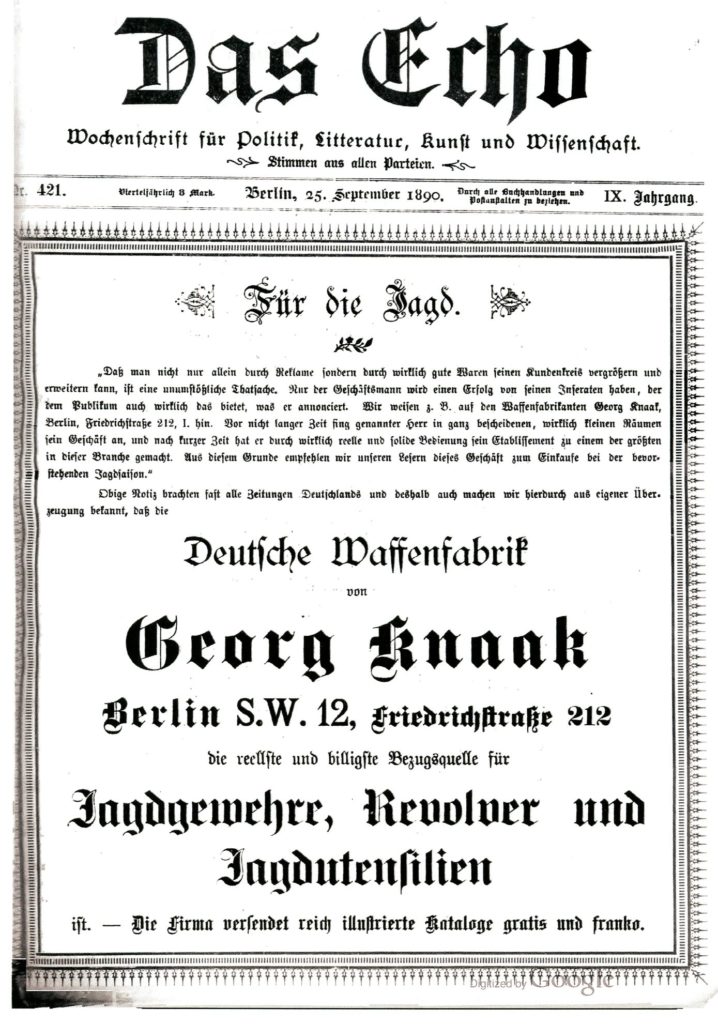 Another advertisement from the first few years of his business at the Friedrichstraße 212 address lists many of the items he carried. His inventory was so varied that it can be safely assumed that he was not a manufacturer but a dealer who probably purchased many of his guns from Suhl, Zella St. Blasii and Mehlis. 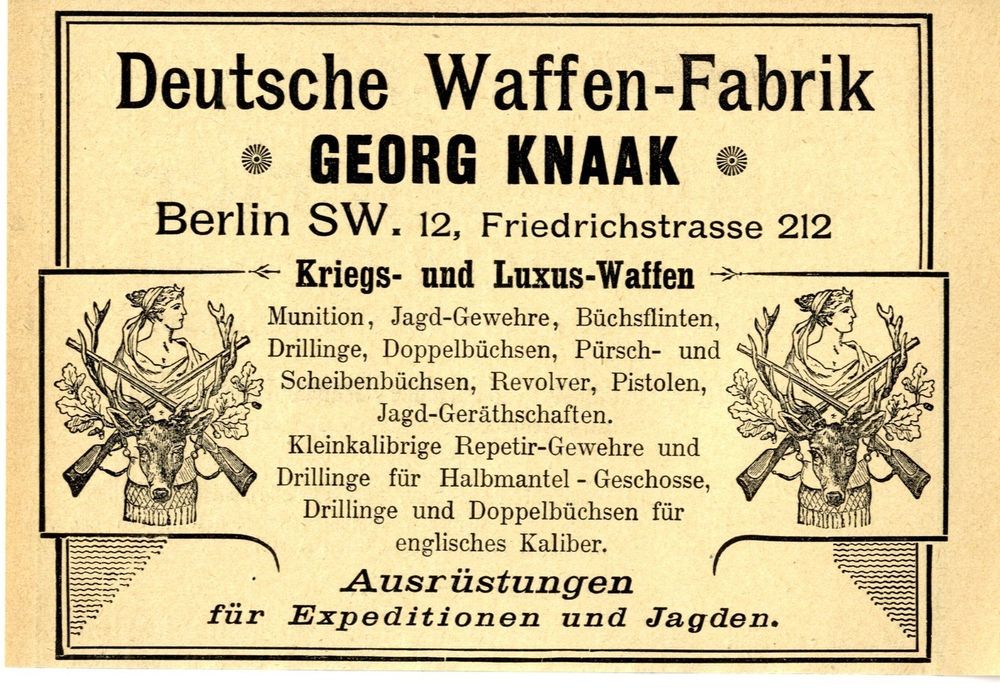 In the 1893 editions of the paper Das Echo he advertised each month with a 1/8th page feature and two months he had a two page spread featuring some of the guns he was offering and notices of recommendation from foreign customers. 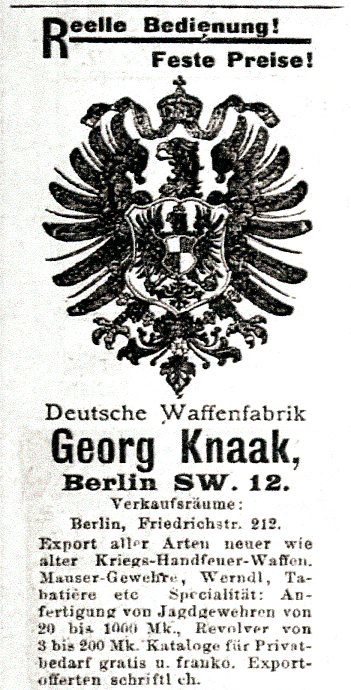 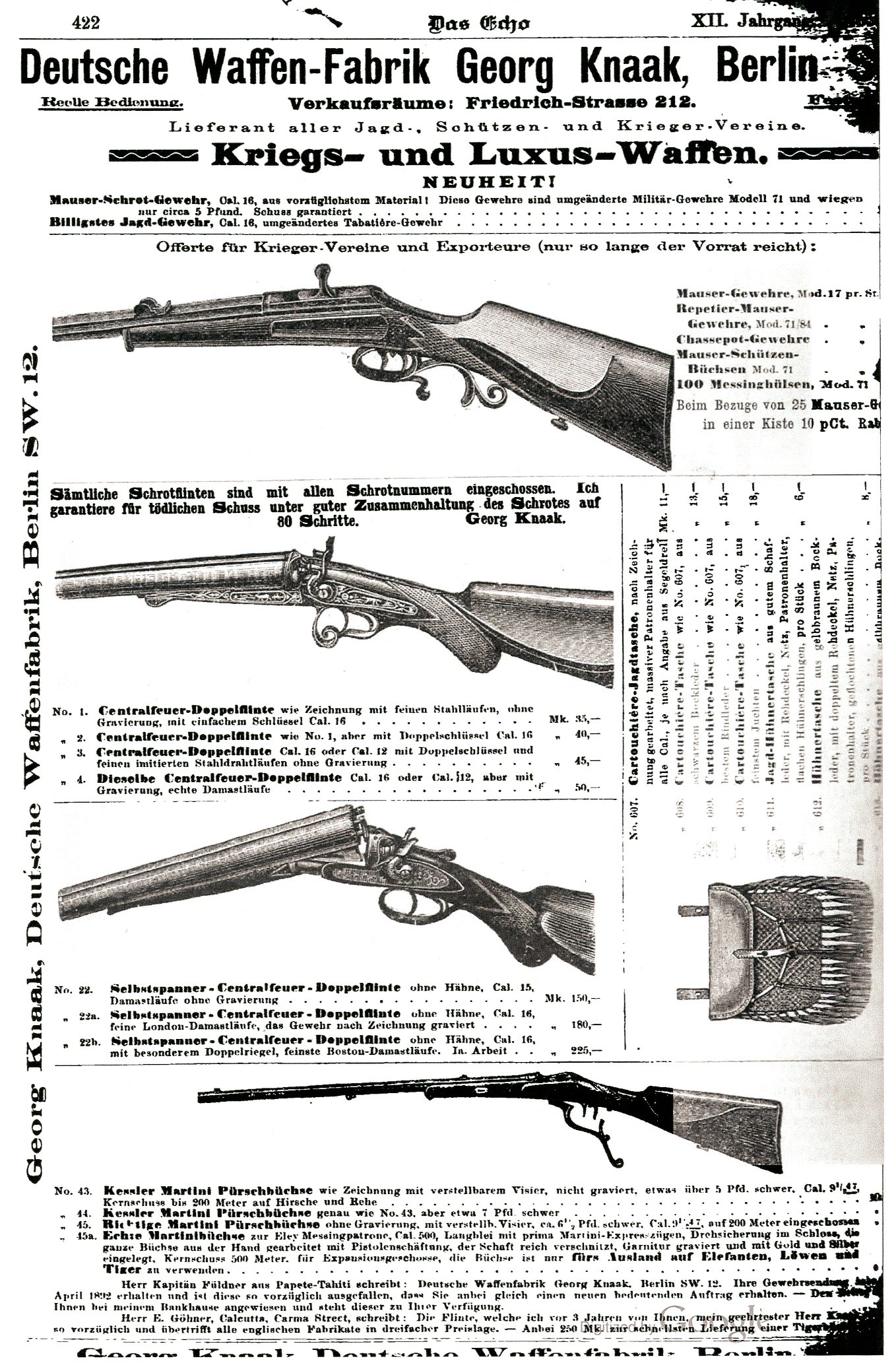 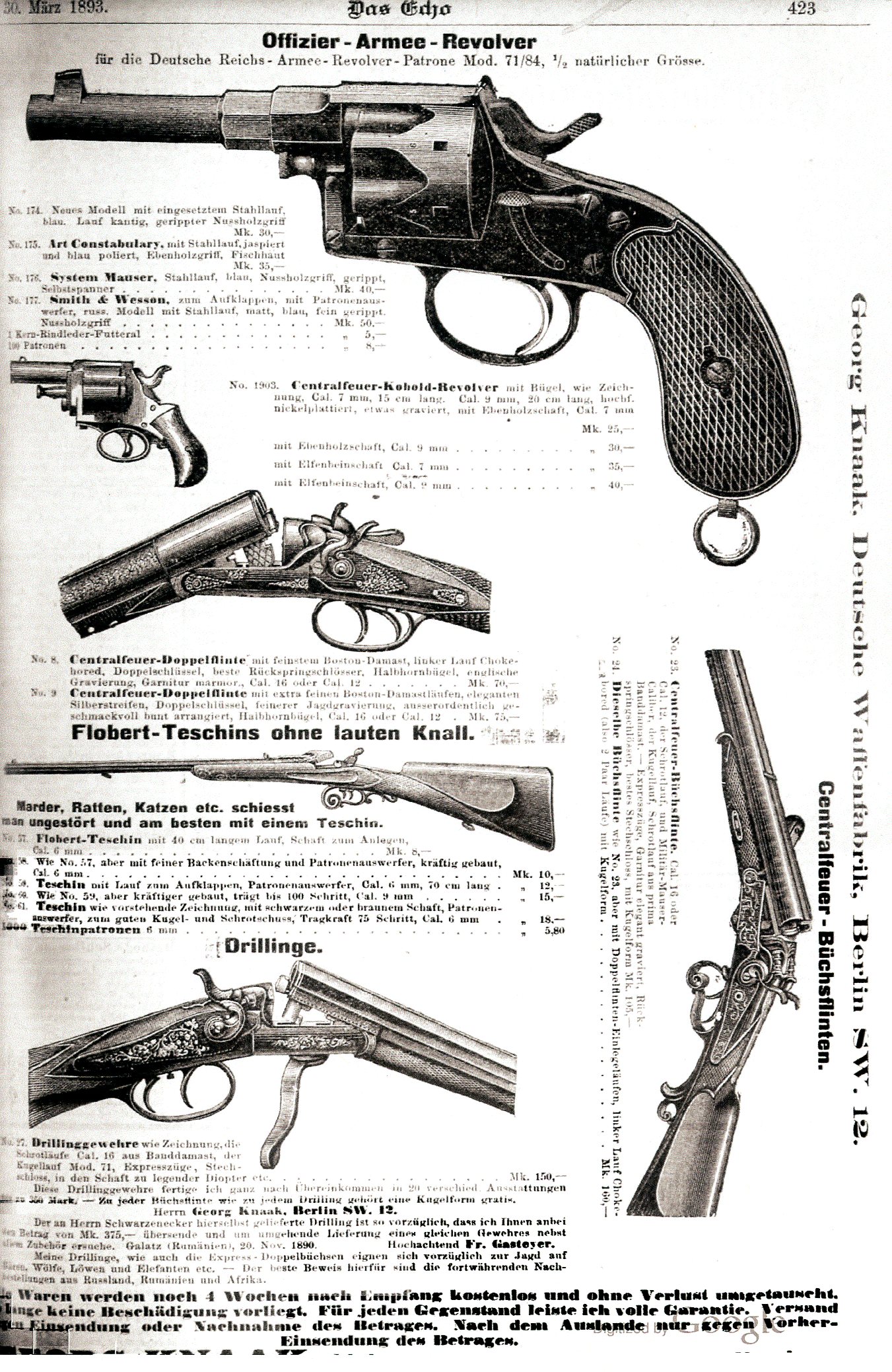 In the 1896 book Guide through Central Europe and Italy he had an advertisement in English.

Around 1894 the address changed to Friedrichstraße 213. For some reason Georg Knaak and his firm is said to have become bankrupt around 1906 and by 1907 the firm was under the leadership of Max Meffert. Also in early 1907 the address changed to Friedrichstraß 240/41. The following letter head dated January 1907 shows Max Meffert as the proprietor of the firm. 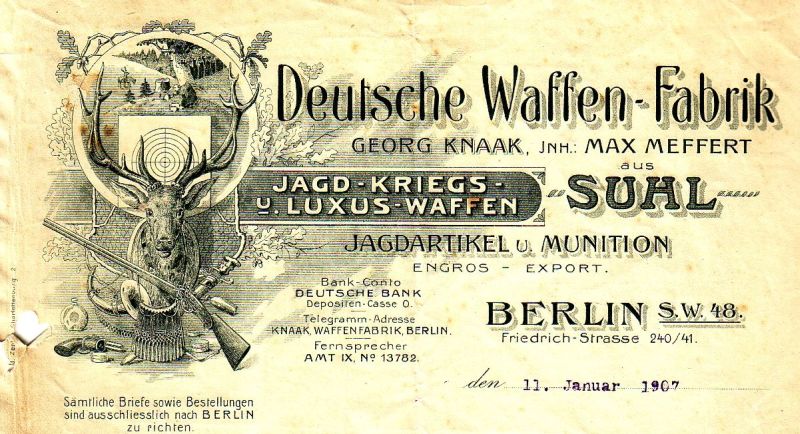 The following advertisement from the 1907 periodical Export still shows the firm as owned by Georg Knaak. It probably took a while to get all of the advertisesments changed to reflect Max Meffert’s ownership.

During June of 1907 Georg advertised in the weekly paper Landwirtschastliches Wochenblatt für Schleswig- Holstein and by August of 1907 the name on the advertisement had changed from Georg Knaak to Max Meffert.

Who was Max Meffert and what relationship did he have with Georg Knaak? We don’t know the answer to that but I personally think that since Georg Knaak’s business and inventory was so vast he probably had a man who worked as a buyer and salesman while he concentrated on the operations. Max Meffert seems to have family ties to the Meffert family in Suhl and I think he may have worked for Georg as the conduit between the Company and the actual gun makers. This would put him in the unique position to take over the firm in some way when difficulties arose.

The following pages from a 1910 Catalog show the firm with Georg Knaaks name on the banner at the top of the pages but Max Meffert’s name on the barrel of the Drilling on the first page. The Catalog also included semi automatic shotguns and handguns in addition to the sporting guns and military surplus rifles from many countries. 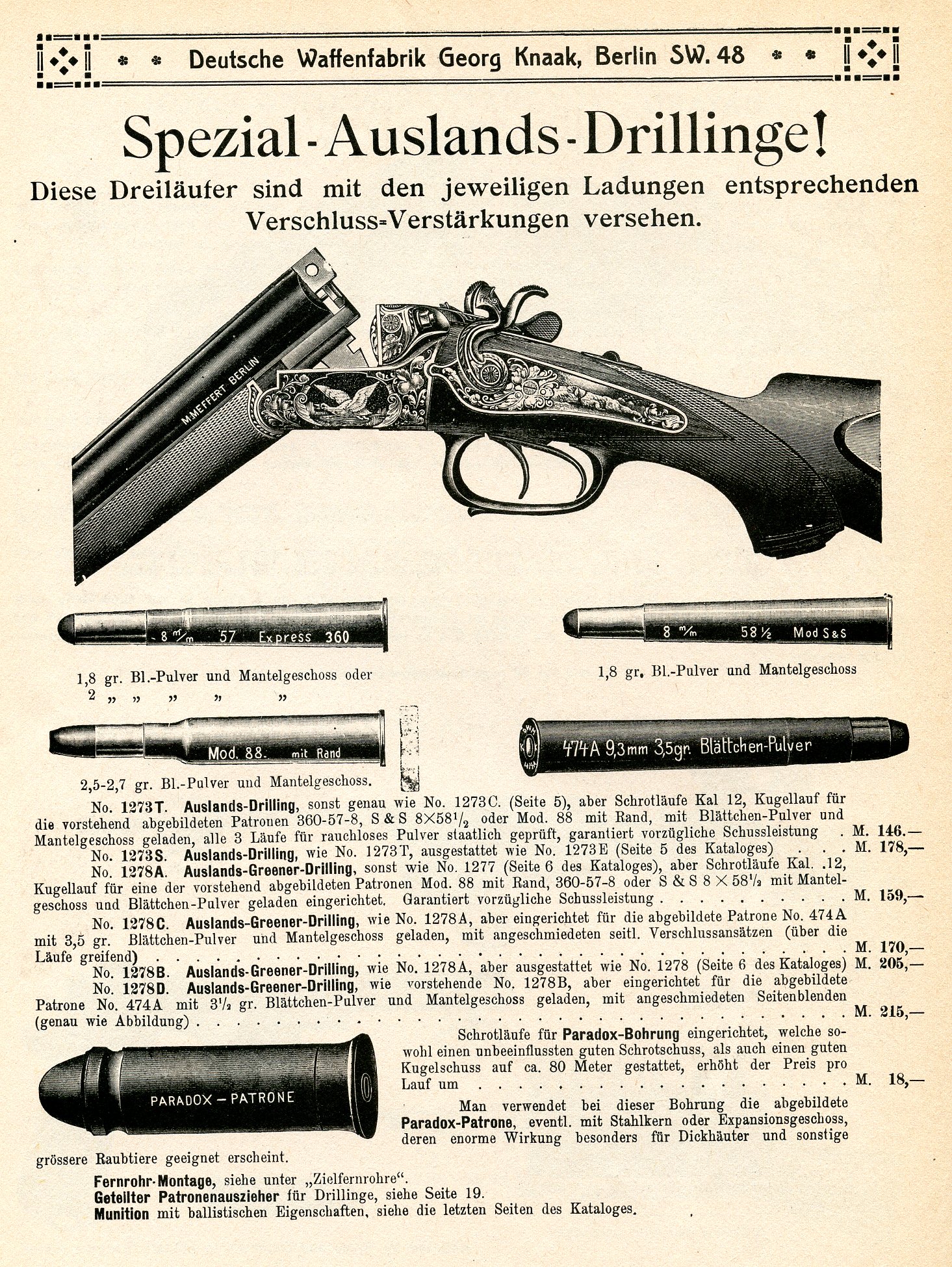 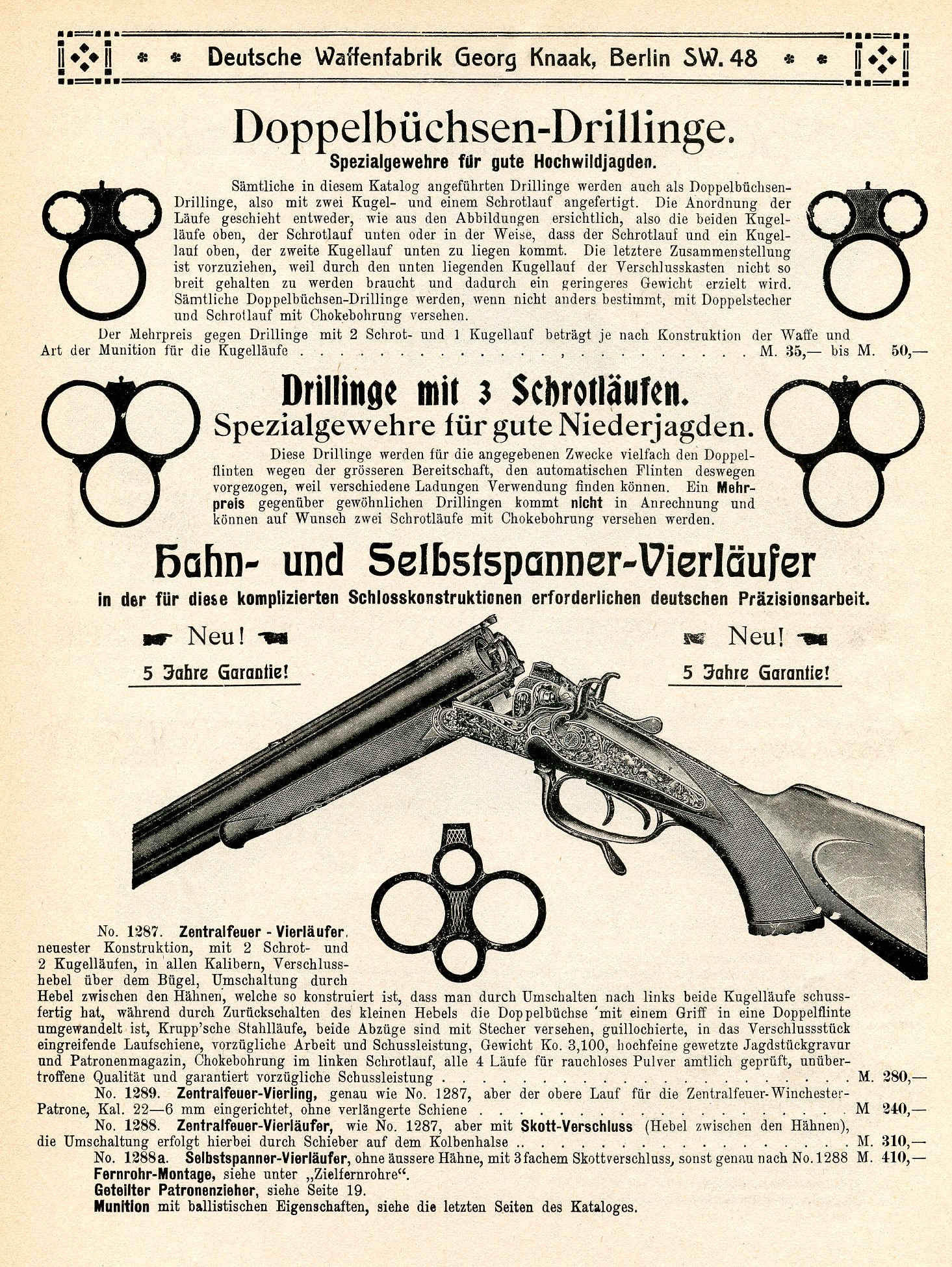 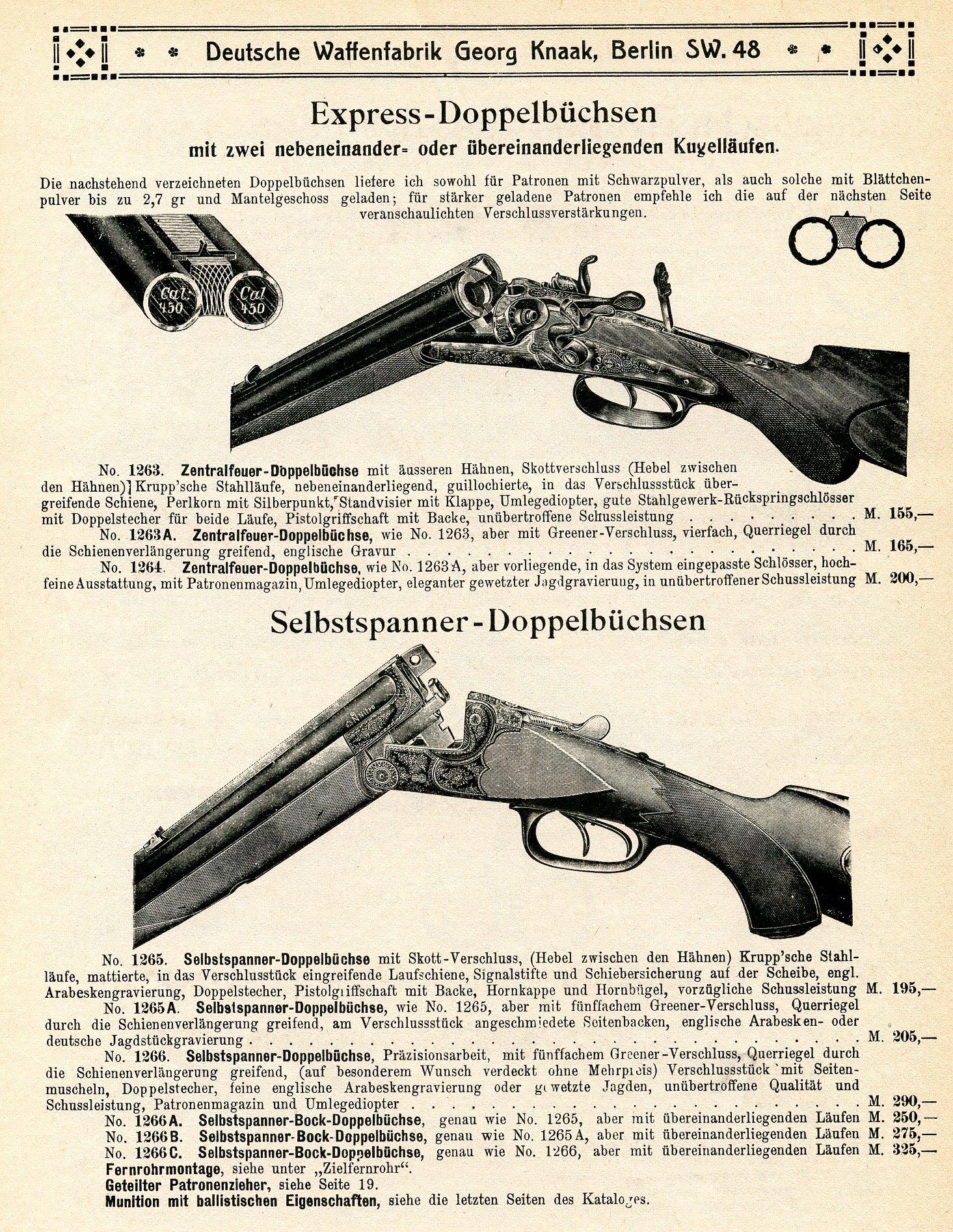 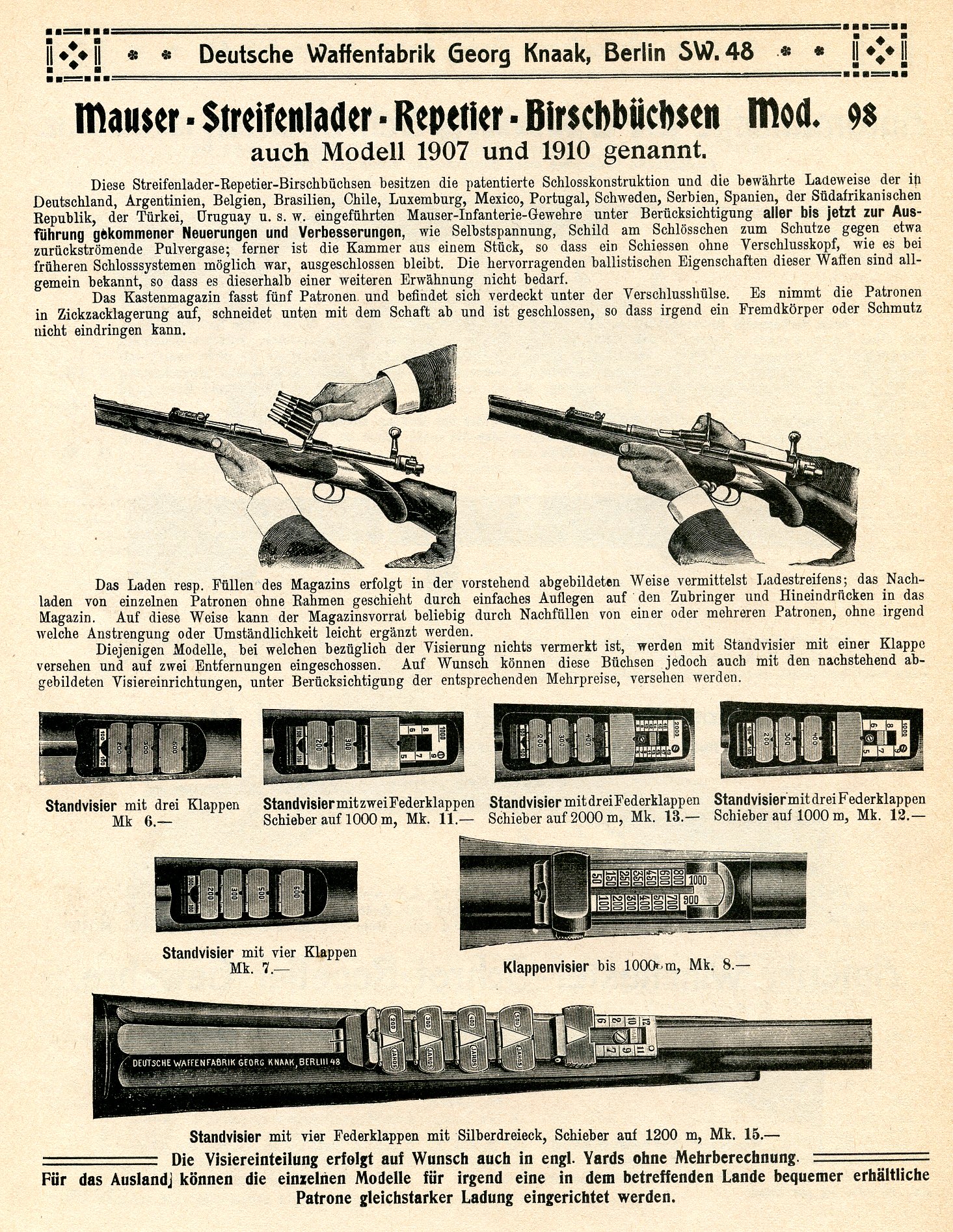 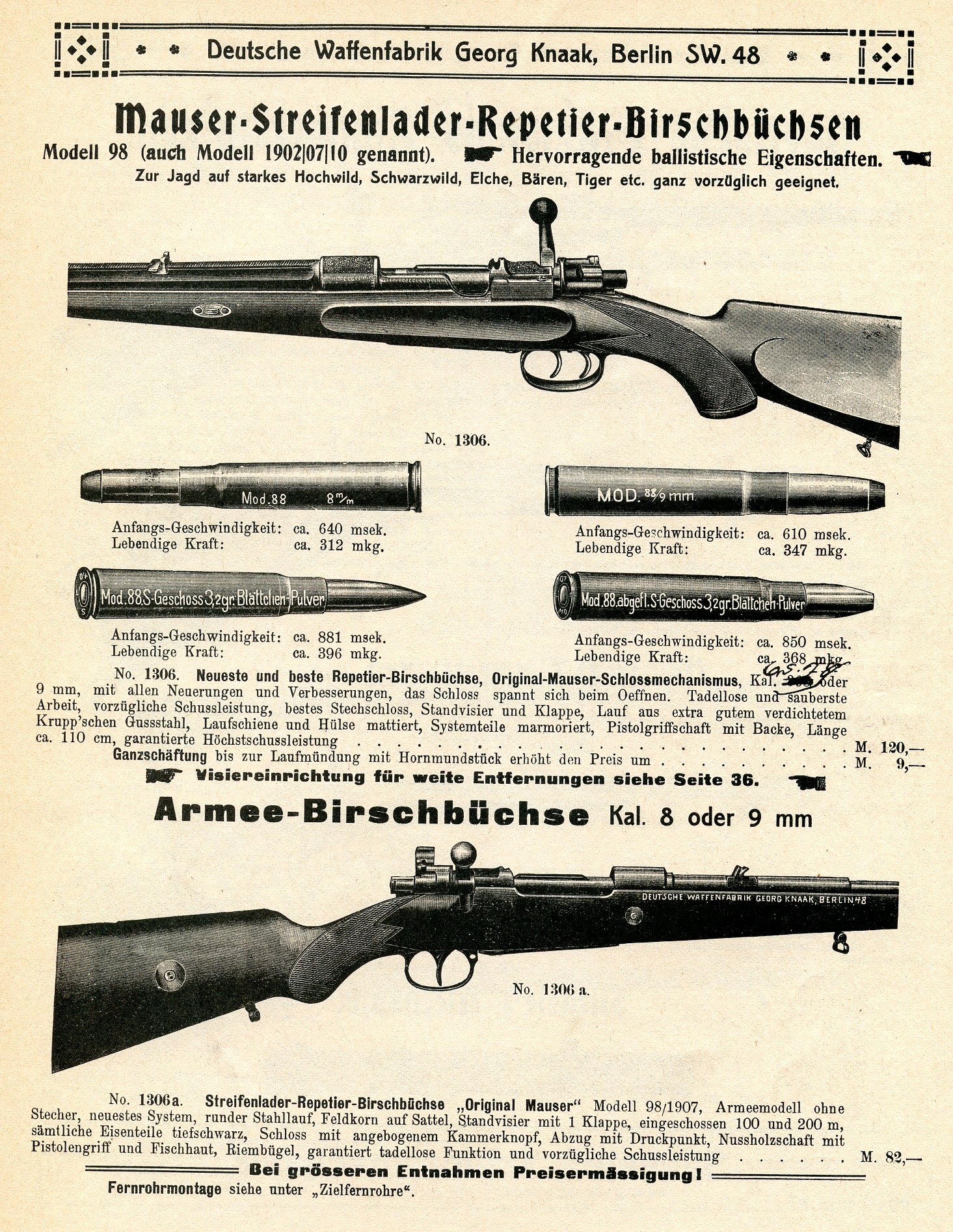 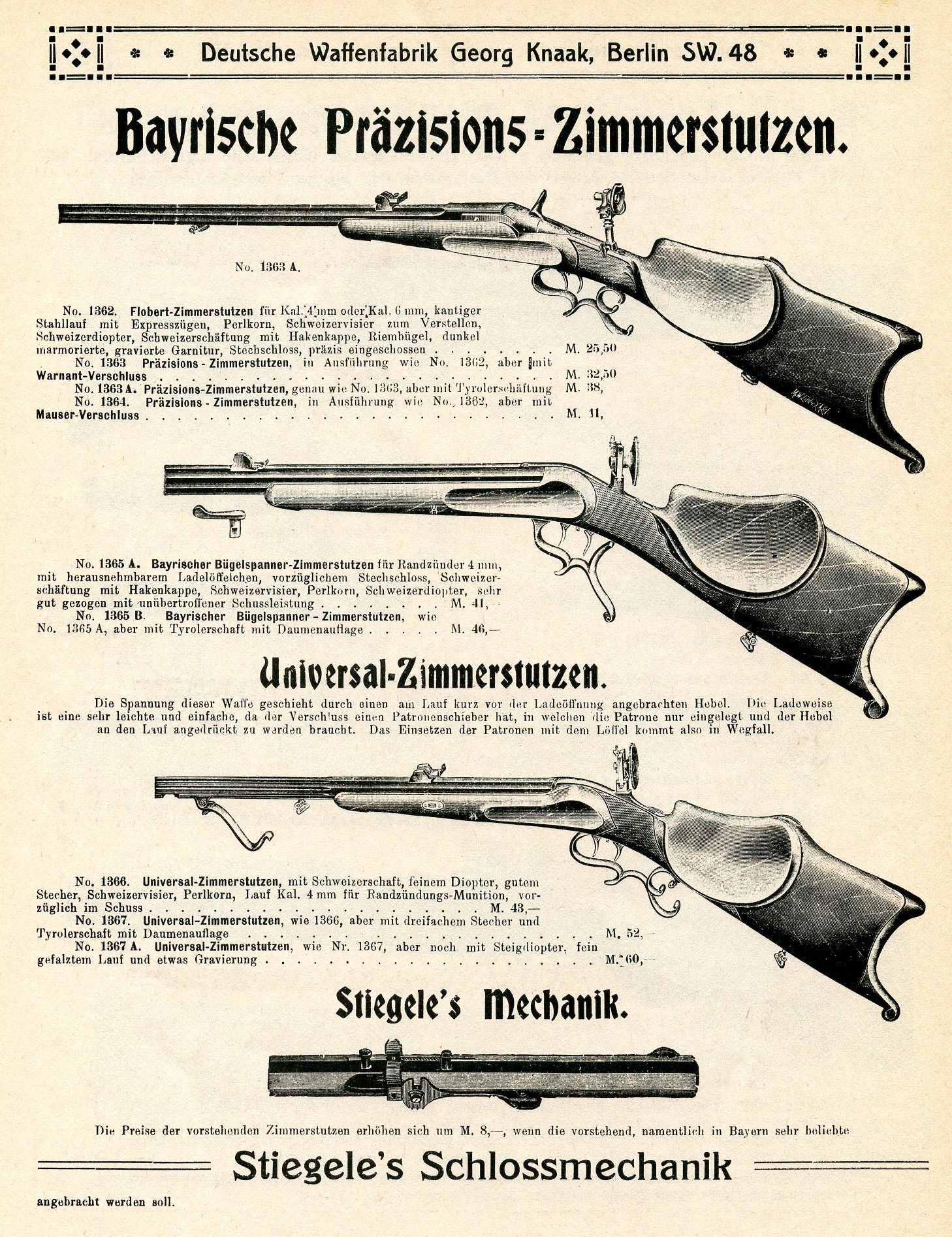 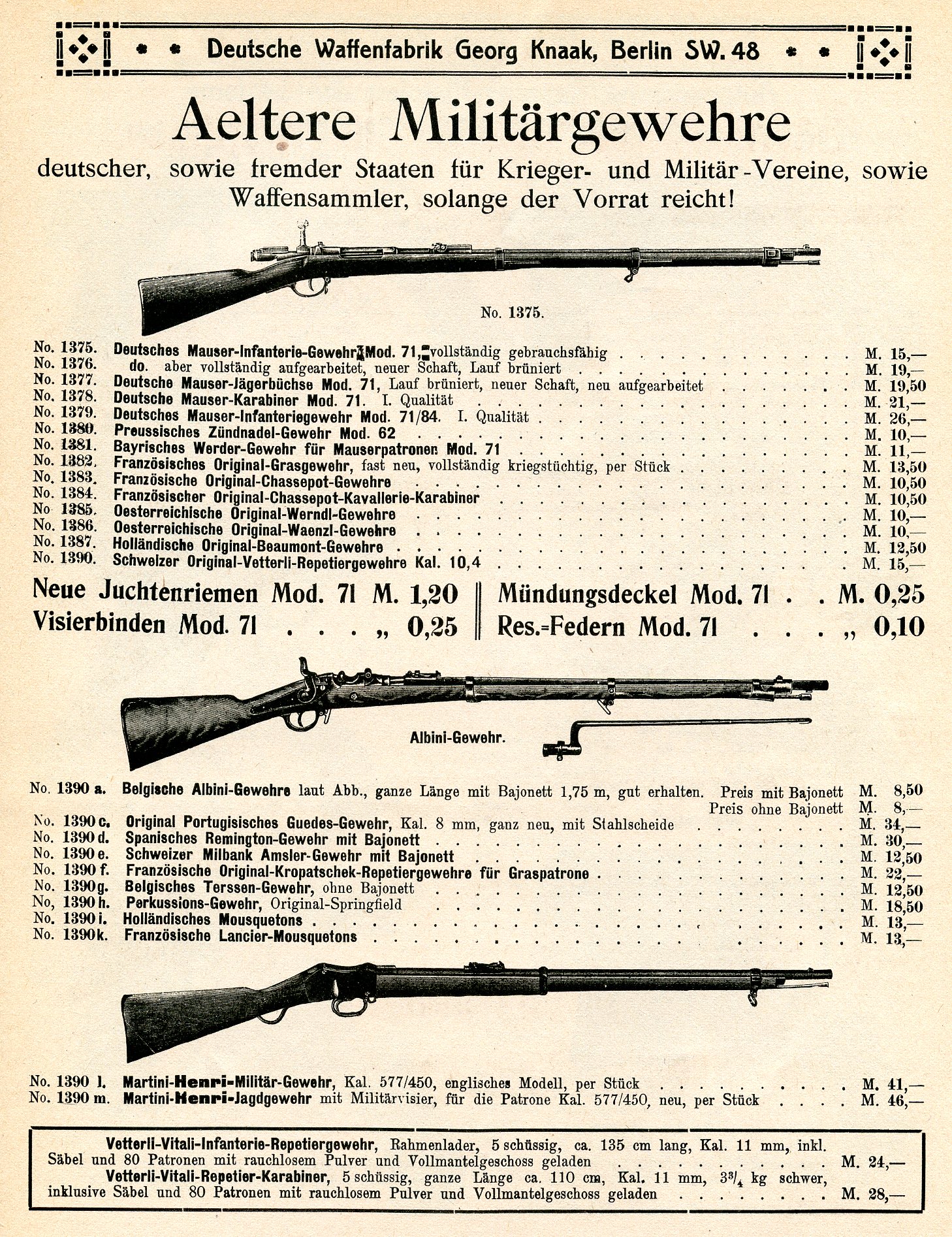 Around 1920 the business moved to Friedrichstraße 15 where they operated until about 1925.

The following images are courtesy of the Rock Island Auction Co.