Albert Richter was a minor gun maker in the city of Cottbus in Brandenburg. His shop was located at Mauerstraße 3 until 1921. Albert passed away in 1922. Then the business moved to Neumarkt 5 where it was carried on by Otto Richter Senior. When the new town hall was built in the 1930’s the business moved to Altmarkt where it operated under the name Wachter & Co. This location was destroyed during World War II.

Albert was probably born around 1850. He was an accomplished gun maker and was issued three patents for firearms.  The first patent was DRP 29404 of April 22, 1884 for a Lock mechanism for center fire hunting guns. This incorporated a sliding block attached to the Roux under lever which cocked the internal hammers when the lever was opened. The second patent was DRP 53061 of Dec. 20, 1889 for a lock mechanism for a drilling incorporating a selecting handle on the right side. It was not a practical design but a gun with it’s action was the basis for his last patent issued in 1891. The last patent was DRP 61189 of June 2, 1891  for automatic sights for a drilling or combination gun.

Below are two advertisements for Albert richter’s guns dating from the mid 1890’s. The one on the left announces his self cocking Drilling. 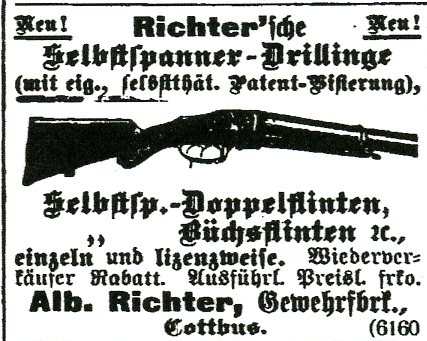 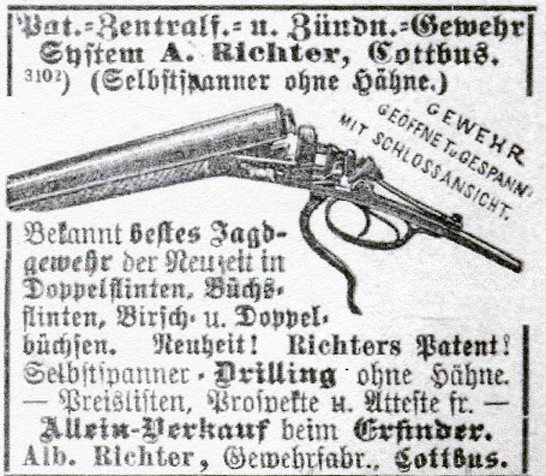