The following information is found in and translated from the book Heimat der Büchsenmacher by Mr. Hans-Jürgen Fritze. It is used here with the kind permission of  the owners of the copyright-DWJ Verlags-GmbH.  All others who use this information hereafter must apply for permission from them. Click Here to go to their web site. The book Heimat der Büchsenmacher is in German and I have translated and edited it in my own words for easier reading.

The Jung family has been involved in weapons manufacturing of one kind or another for nearly 600 years. The family originated in Solingen and probably was involved in the blade making or forging trade there. In 1550 the Jung’s first appear in Suhl and Valentin Jung who it is assumed was born in the early 16th Century and died in Suhl in 1583. His wife Catharina died on Dec. 21, 1605. Another Valentin Jung (the 2nd?) was born in Suhl in 1539 and is assumed to be the son of Valentin and Catharina. In 1562 he married Anna Valentini, she passed away on Aug. 15, 1608 and Valentin on July 23, 1619.

In 1638 we find that Nikolaus Jung had a contrct to deliver 3000 muskets and other weapons to the Imerial Army.

A document from 1658 lists the following as masters of the Locksmith’s trade- Casper Jung, Christoph Jung, Hans Jung on the Bruken, Leonhardt Jung, Michael Jung, Niclaus Jung (the elder) and Niclaus Jung (the younger). In 1674, Hans Casper Jung who was perhaps the son of Casper Jung began an apprenticeship in Vienna, Austria.

On August 19, 1640 Valentin Jung (the 4th) married Anna Georgi Schulthessen. Valentin Jung (the 5th) was born on April 23, 1654 and on Nov. 11, 1677 he married Dorothea Stoll. Valentin and Dorothea had a son Matthäus who was baptised on May 7, 1681. He learned the trade of Gunsmith and on April 13, 1706 he married Dorothea Pardeck, the daughter of Zacharias Pardeck who was referred to as the “Coriar of Steinweg”.  On June 26, 1707 their son Johann Christophory Jung was baptised. On Oct. 19, 1735 Johann Christophory married Anna Margaretha Jung who was the daughter of Johann Casper Jung. Both Johann Casper and Matthäus Jung were recorded as being Rifle and fittings manufacturers.

Johann Christophory and Anna Margaretha had a son, Johann Casper Jung who was baptised on Nov. 14, 1746. On that baptismal record Johann Ch. was recorded as a “Waffenschmied”. Johann Casper became a master weaponsmith and married Johanna Dorothea Schilling.

To simplify some of this information a chart showing the ancestry of the Valentin Jung family follows. 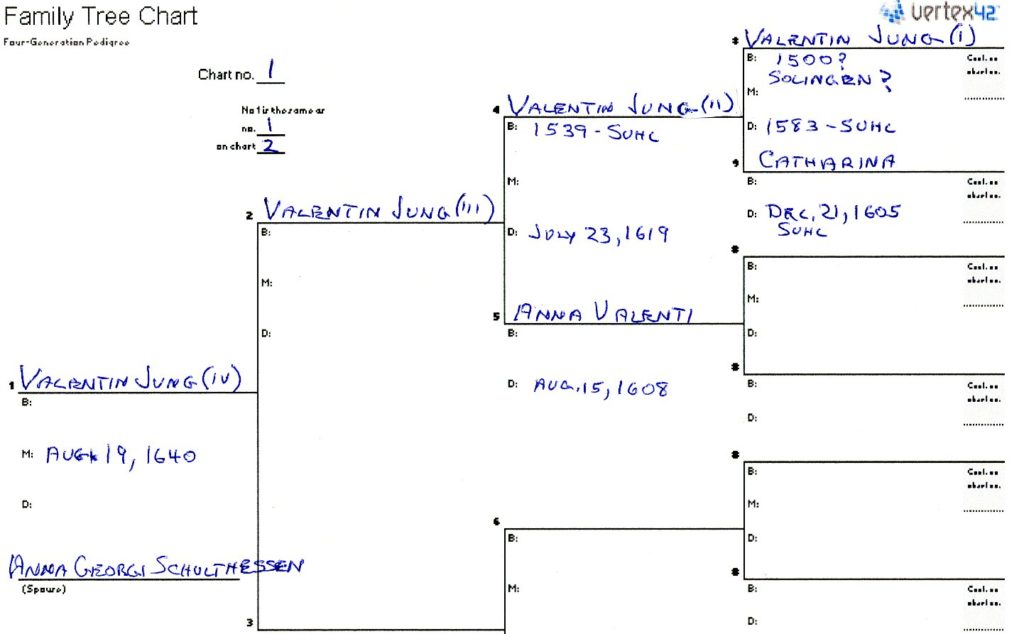 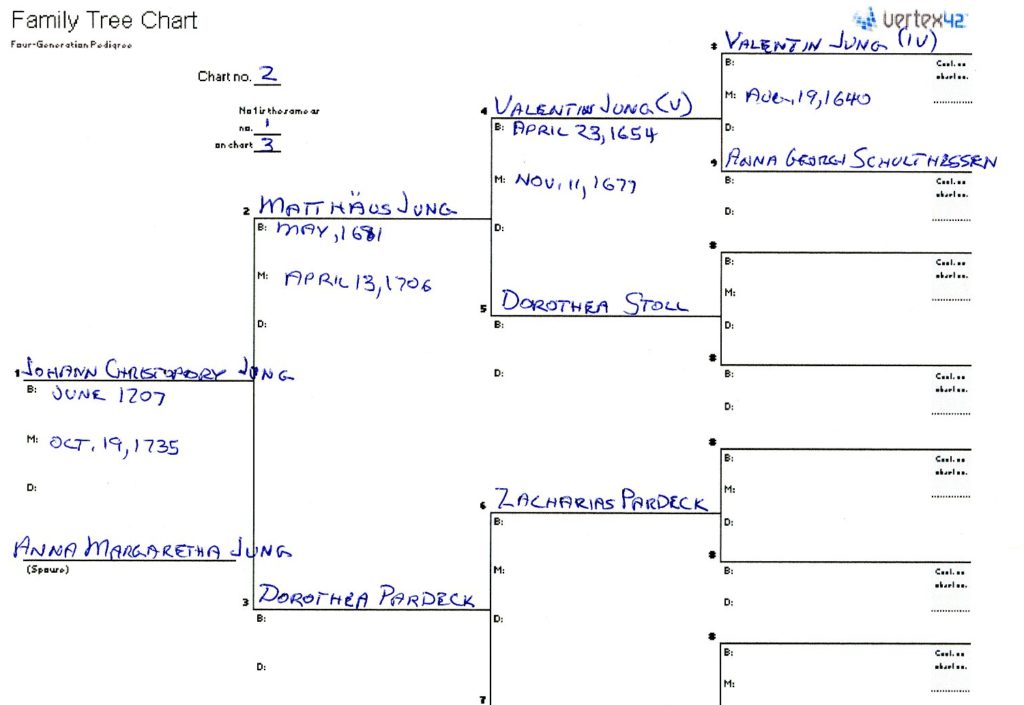 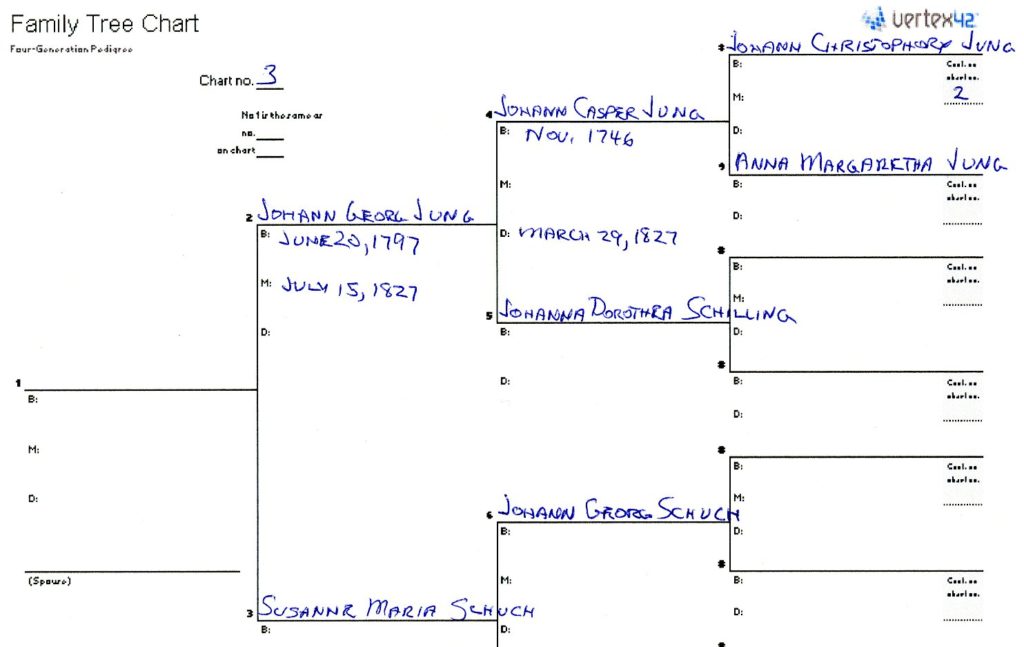 The book Mitteilungen vom Freiberger Altertumsuerein (1903) included the following about Georg Jung- “Georg Jung, gunsmith and tube smith at Olbernhau (1685-86) was in Freiberg and employed for the council. In the administrative tear 1685-86 he received 56 Thalers 6 grschen for 25 muskets which he newly delivered and 5 old ones which he sent.”

Another gun maker named Valentin Jung was born around 1795 to 1800, On Aug. 3, 1876 he was honored by his Schützenguild on the occasion of his 60th wedding Anniversary. He may have been a son of Johann Caspar Jung

The Stuttgart branch of the family

Christian Friedrich Jung who was born on April 10, 1842 is the progenitor I believe, of the present Jung’s in Stuttgart and Bad Kreuznach. His father was a mill owner in Suhl. On June 20, 1869 Christian married Auguste Henriette Friedericke Triebel who’s father was the master gunsmith Johann Georg Triebel and who’s mother was an Eckardt. Christian died on May 29, 1896 of a Cerebral Stroke at the age of 54 leaving a wife and four children. One of these children was Paul Juliyus Gebhard Jung who was born on Sept. 27, 1875. On May 16, 1903 he married Marie Ida Fahner who was born on May 21, 1880. She was the daughter of the master gunmaker Friedrich August Fahner and Luise Emilie, nee Keller.

Returning to the Suhl Jung’s-

In 1832 Samuel Jung is listed as a Waffenfabrik owner with an address of Oberen Straße 184.

W. Darrin Weaver’s An Encyclopedia of German Tradenames and Trademarks states that August Jung of Viernau near Suhl was a manufacturer of Drillings and sporting weapons. The following 16 ga. and 8 x 57R drilling with 27 inch barrels made by him in May 1927 was sold by the (and is courtesy of) Rock Island Auction Co. on Dec. 8, 2013. 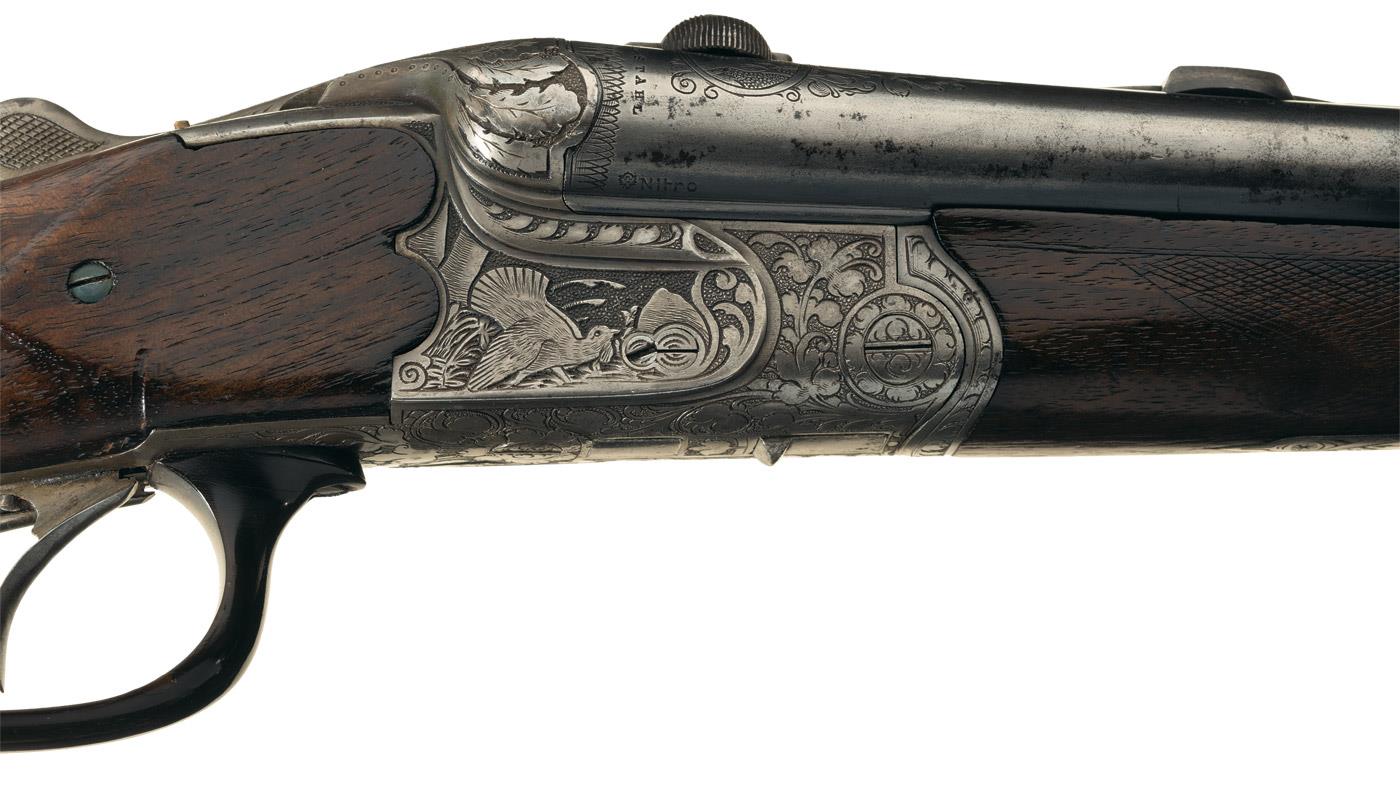 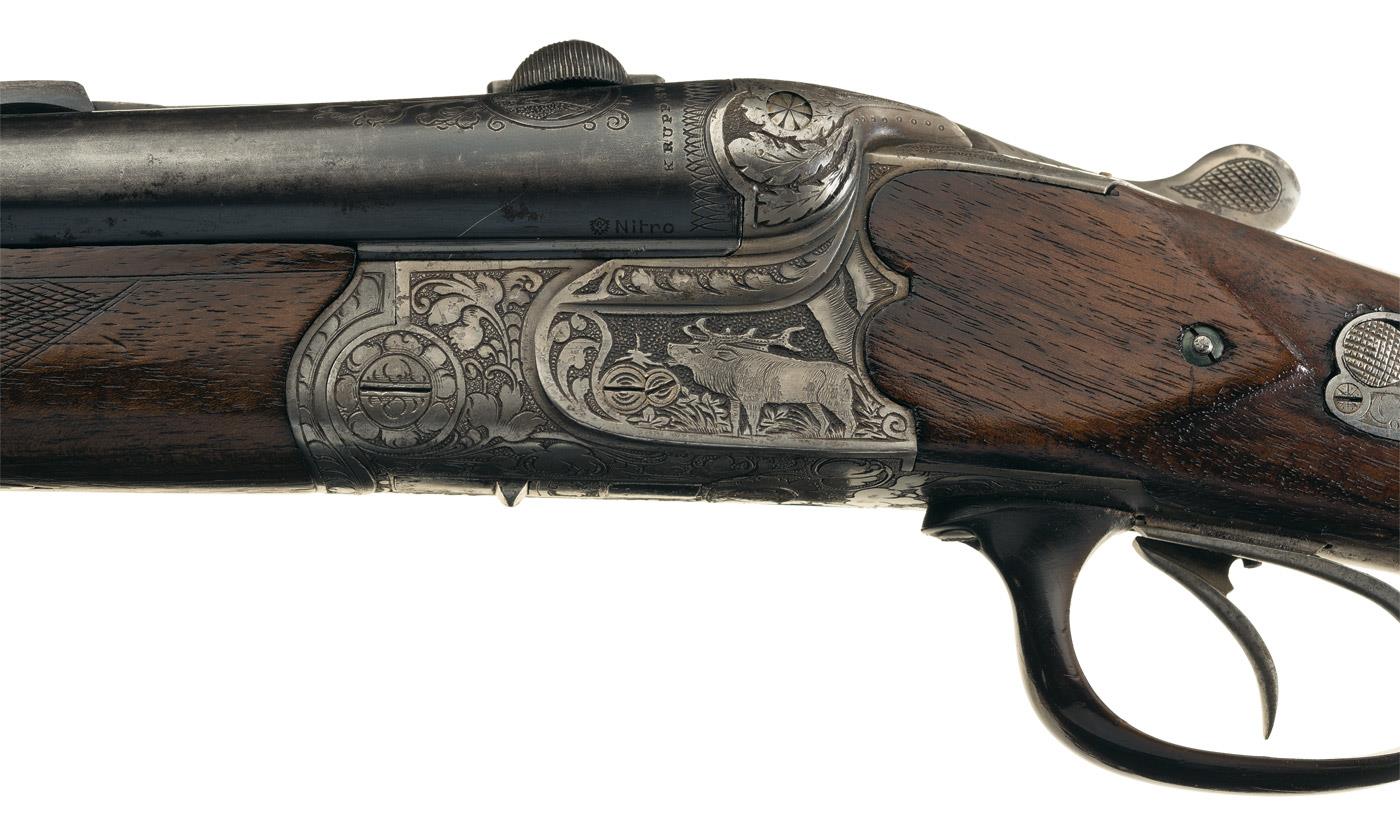 The 1835 edition of the Amt=Blatt der Königlich Preuzischen Regierung zu Frankfurth a.b.O. contained the following brief item, being roughly translated as ” With a selection of Target and Hunting Rifles and Double Hunting rifles of all kinds, we stand again for the forthcoming Remniscere Mass for sale in the house of the gentleman S. C. Baswitz on the Marst no. 16 in Frankfurth a.d.O.”

The following item appeared in the 1843 Deutsche Industrie Ausftellung zu Mainz by Hektor Rössler. It roughly translates as follows- ” Fr. Jung and Son, rifle fabrikanten in Suhl: They supplied to a exhibition a double barrel shotgun in a case with Lüttich’s damascus barrels, all garnished and inlaid with gold, the stock decorated with carving; also a pair of pistols in a case, with carving on the stocks and gold deposits. Both the double barreled shotgun and the pistols were with the most glittering hand work, and worked equally well, especially as regards the decorations and Locks, trimmings and gold deposits; With these works, the splendidly beautiful Damascus patterns were in full swing.”

The May 1, 1908 issue of Schuss und Waffe contained the following article about the Drilling lockwork used by Friedrich Jung & Söhne. 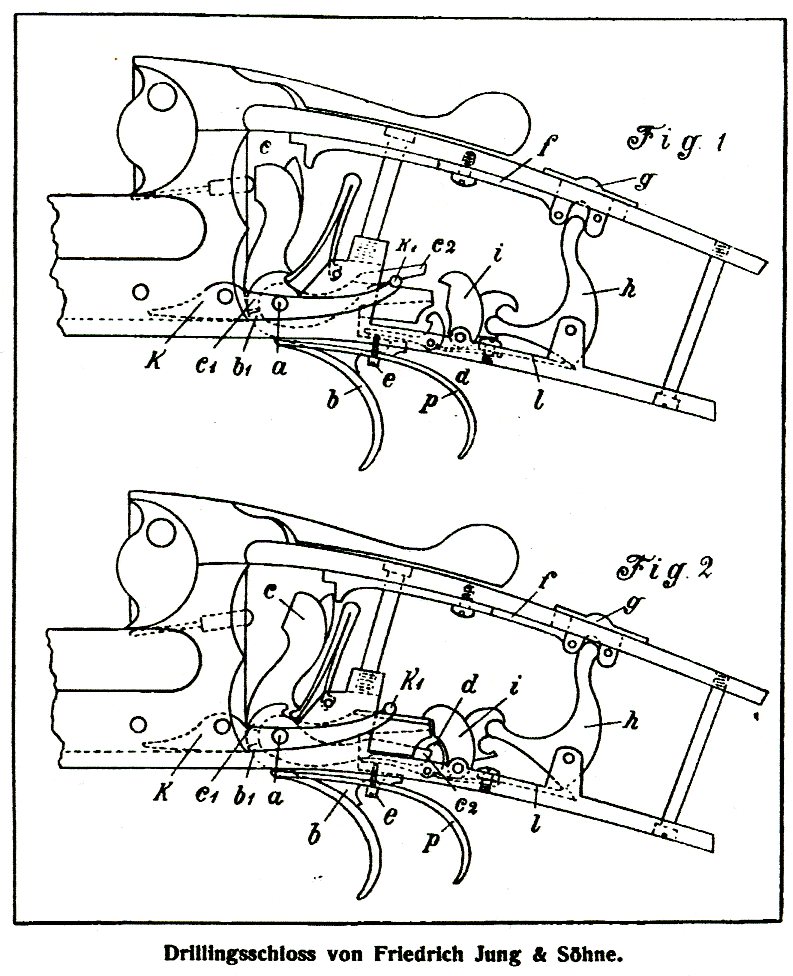 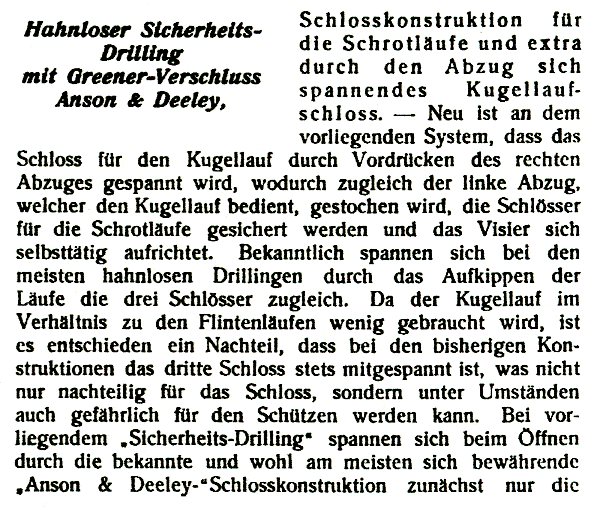 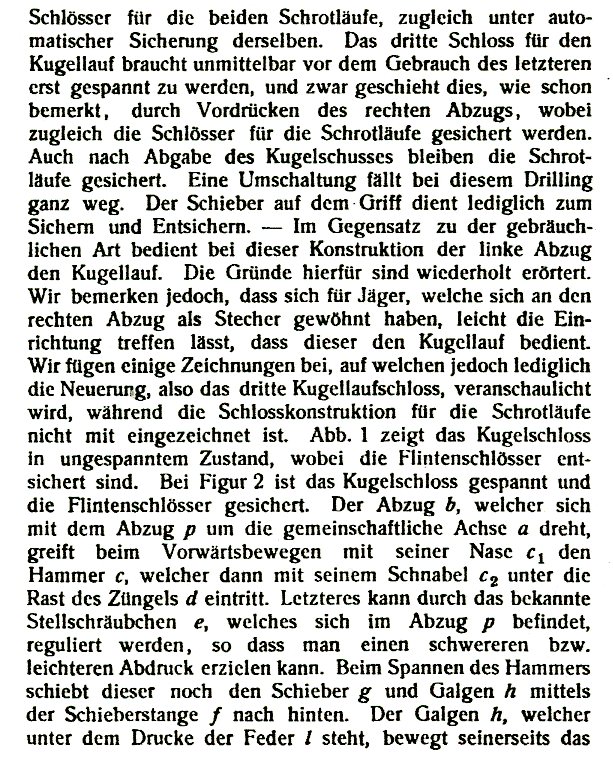 Following is a series of photo’s of a .58 caliber Fr. Jung & Söhne half stock rifle no. 1828. Sadly they were taken with one of the early digital cameras which left a lot to be desired. 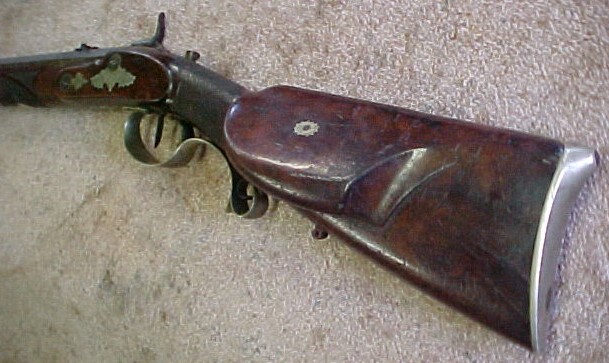 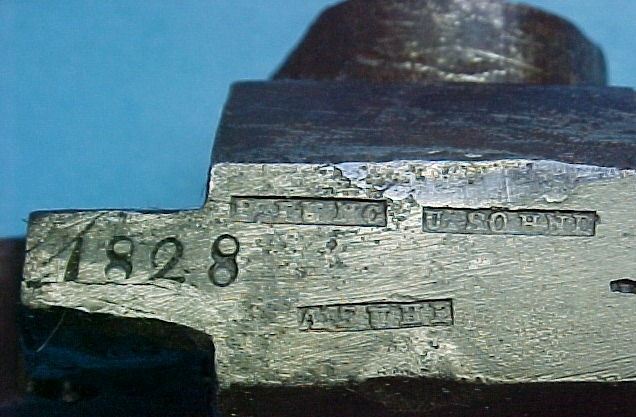 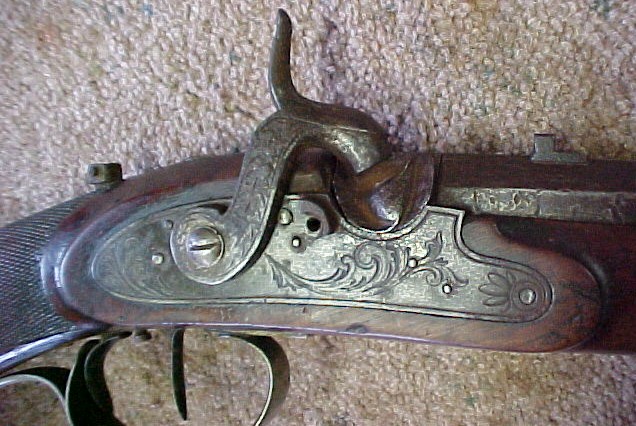 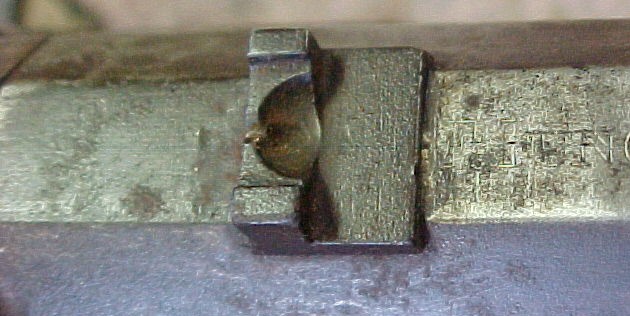 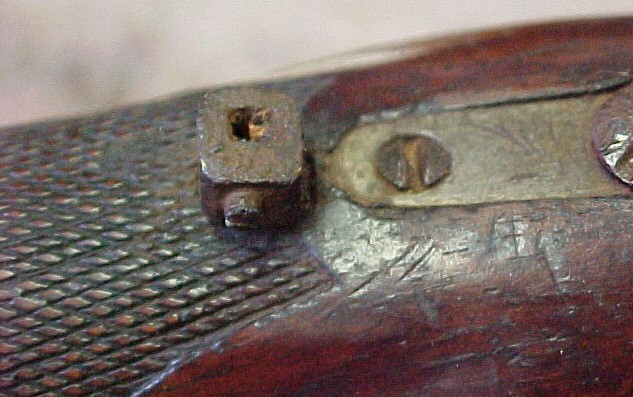