Axel Pantermühl in Germany has shared the two Bernhard Merkel Catalogs that follow from his extensive archives.

A complete 36 page catalog for Bernhard Merkel is availible for viewing by clicking Here. 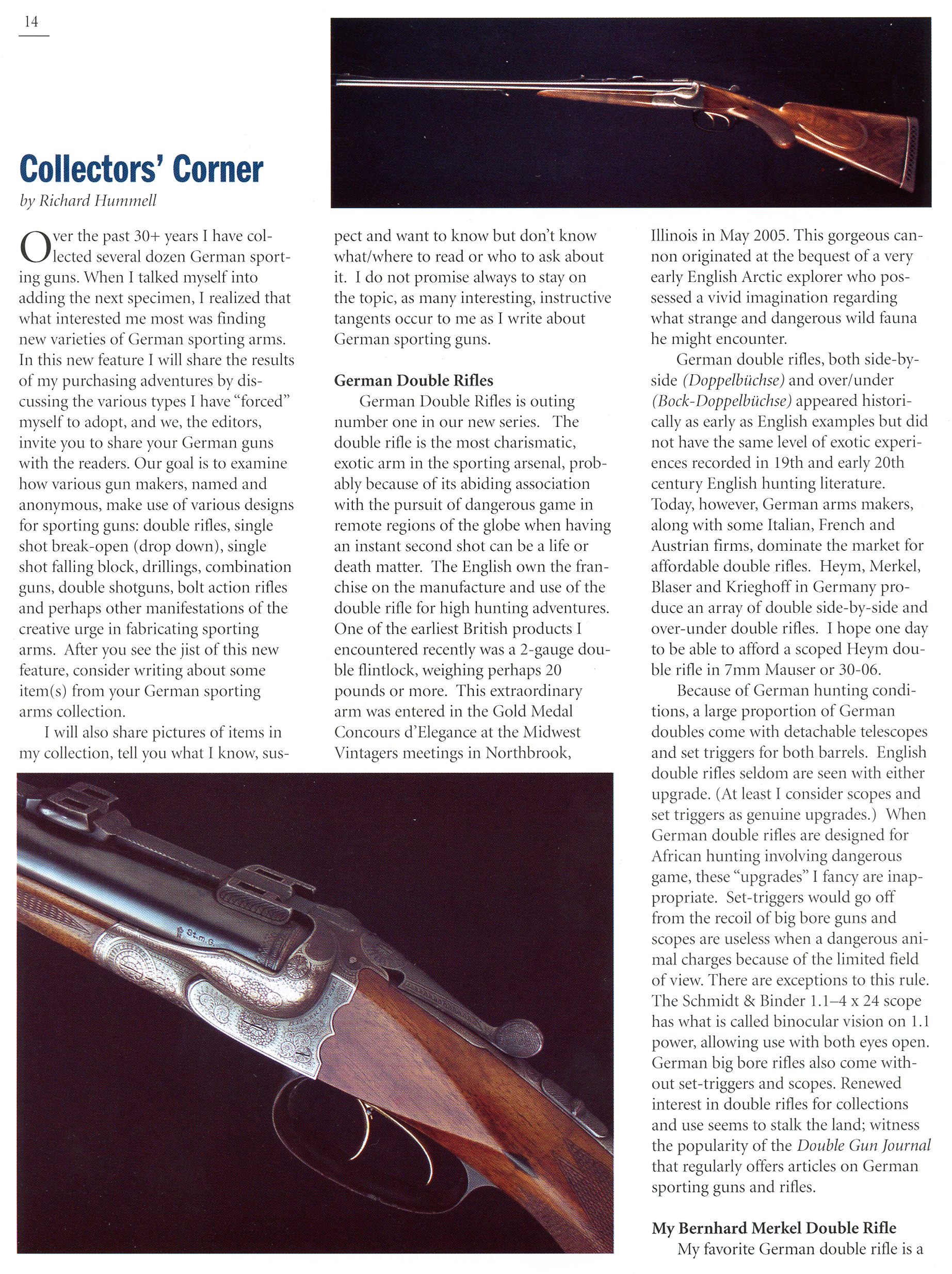 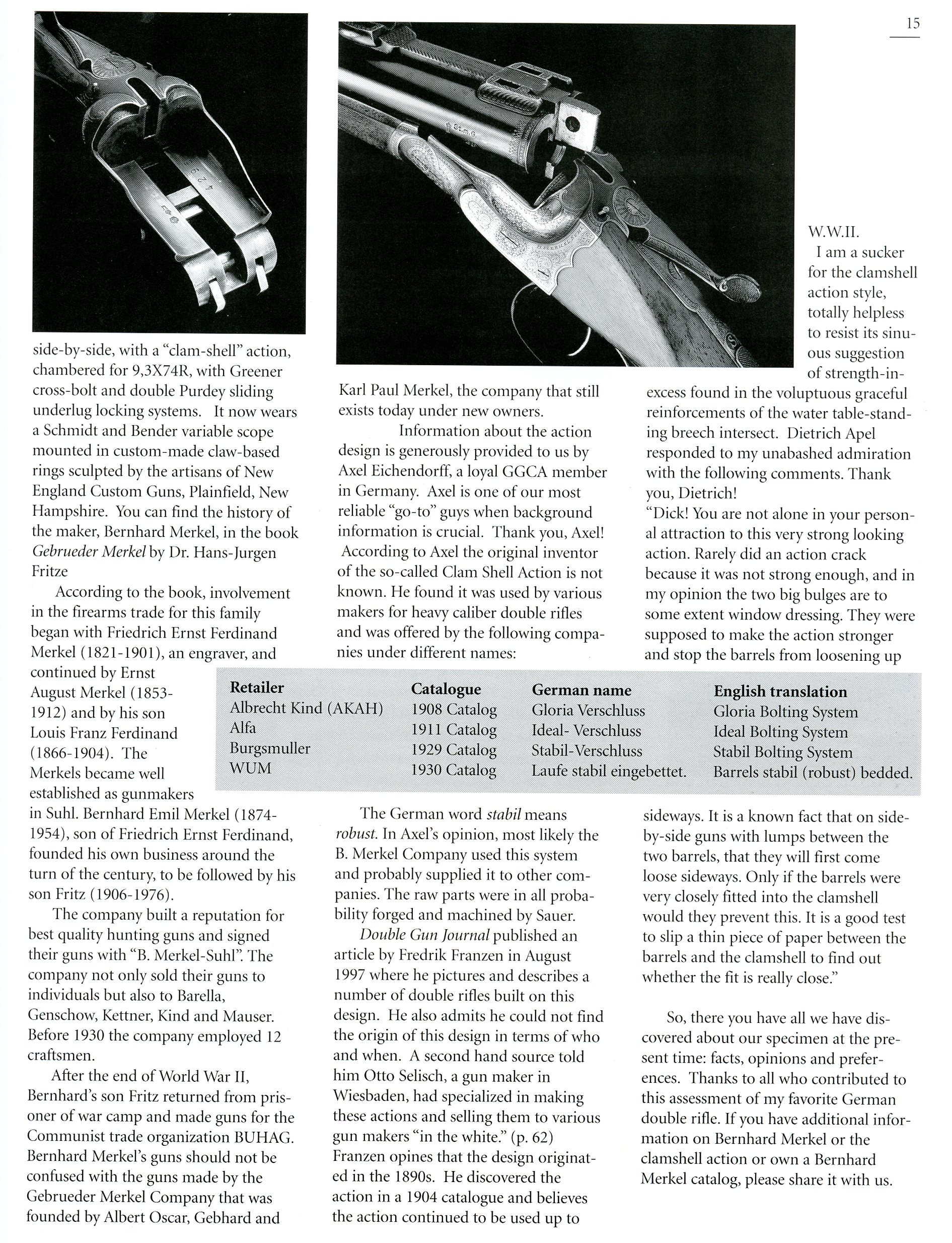 Before we view a few pictures of the Clam Shell (Mussellverschluss) double barrel rifles made by B. Merkel we have two pages of the B. Merkel Catalog kindly sent to me by Mark Baumgarten which detail them. LBS. 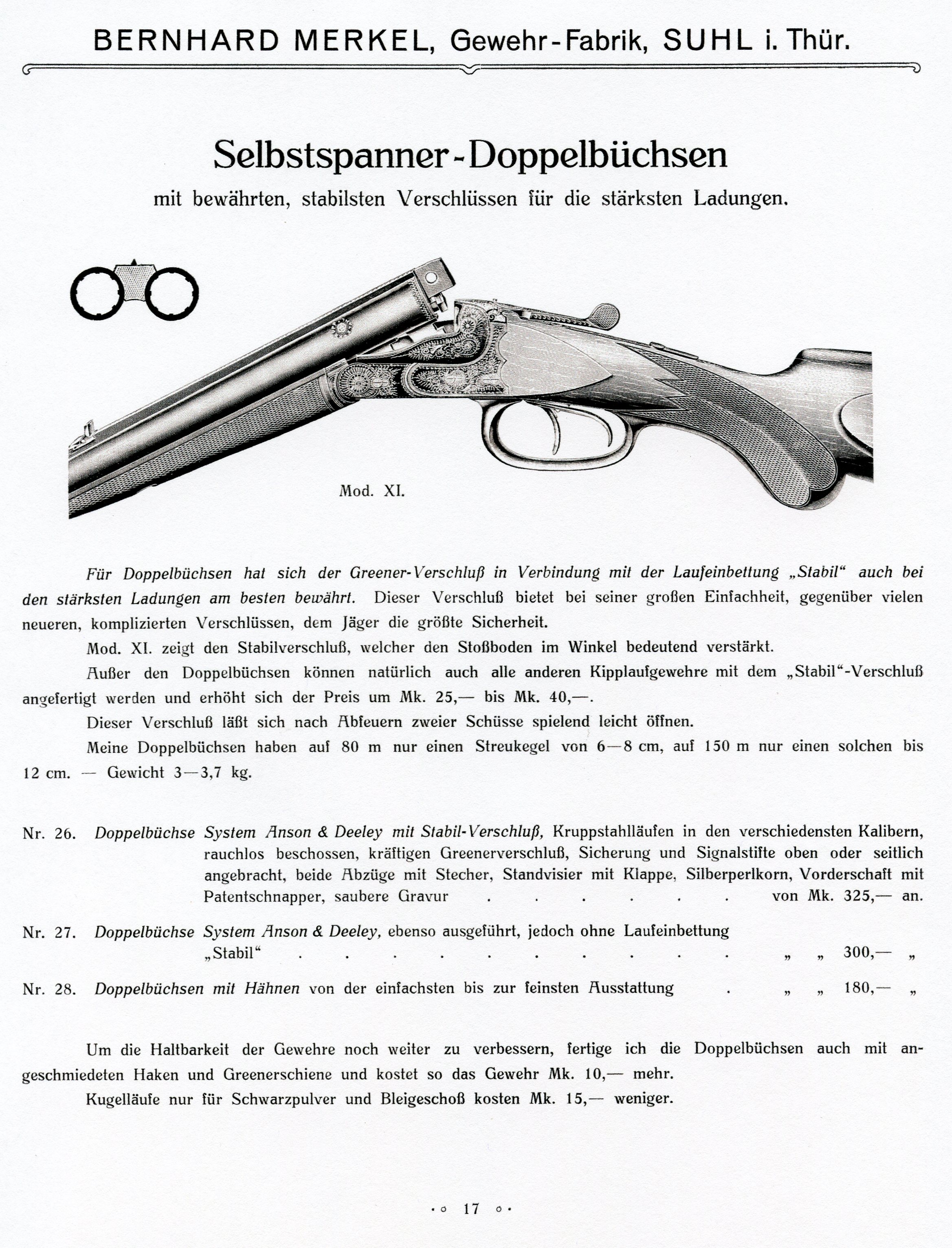 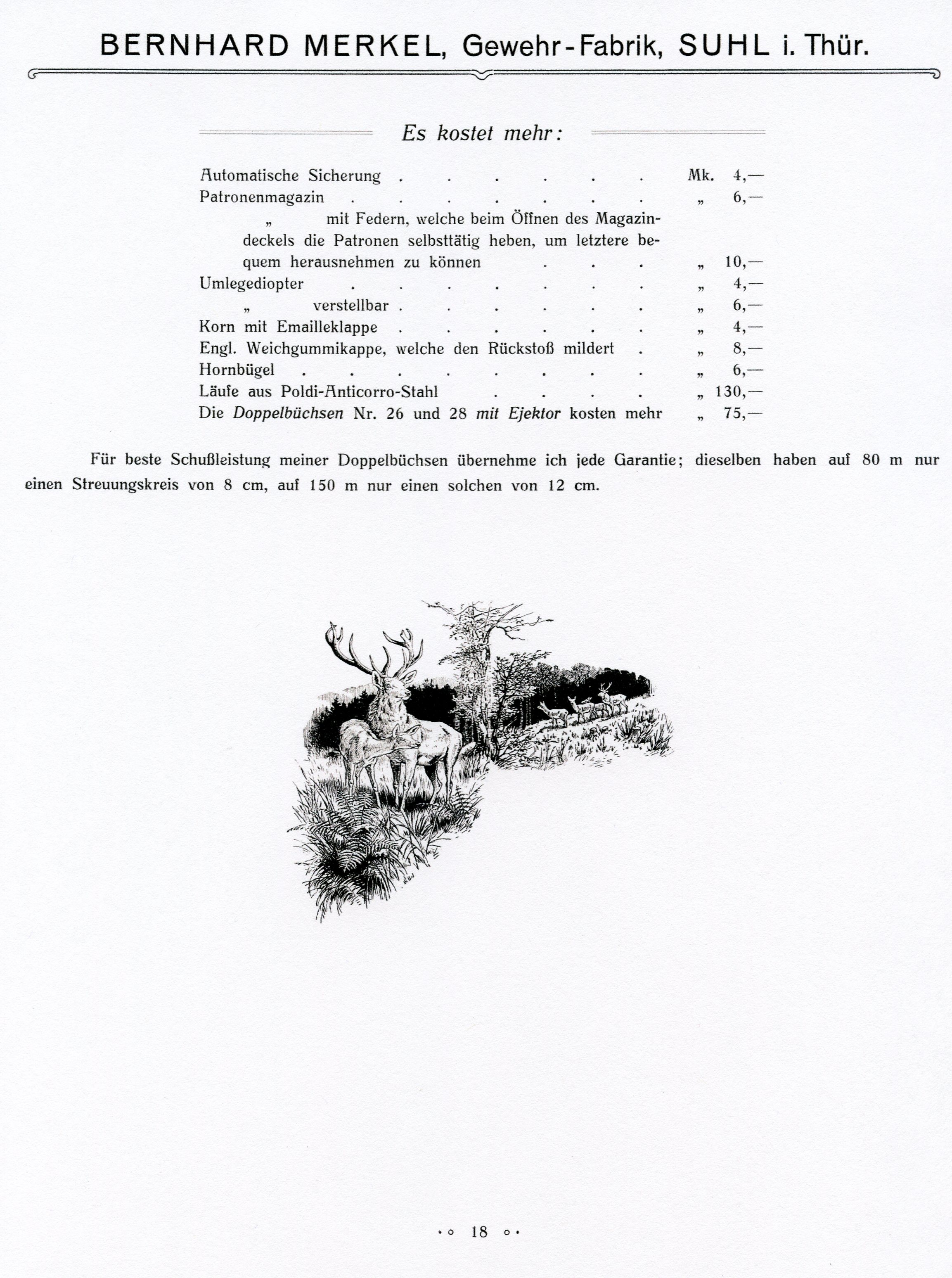 The following four images are of a double barrel rifle by Bernhard Merkel. 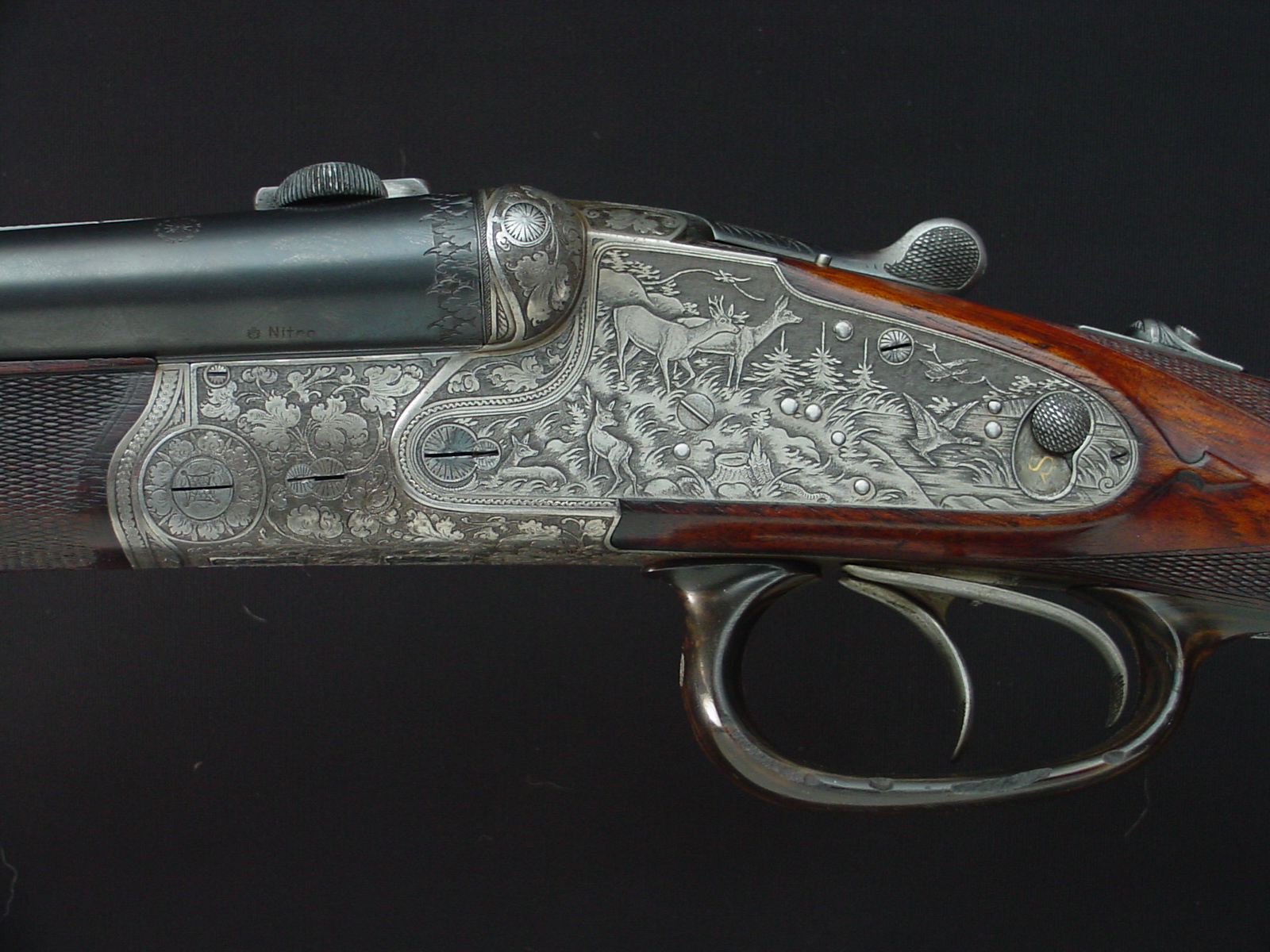 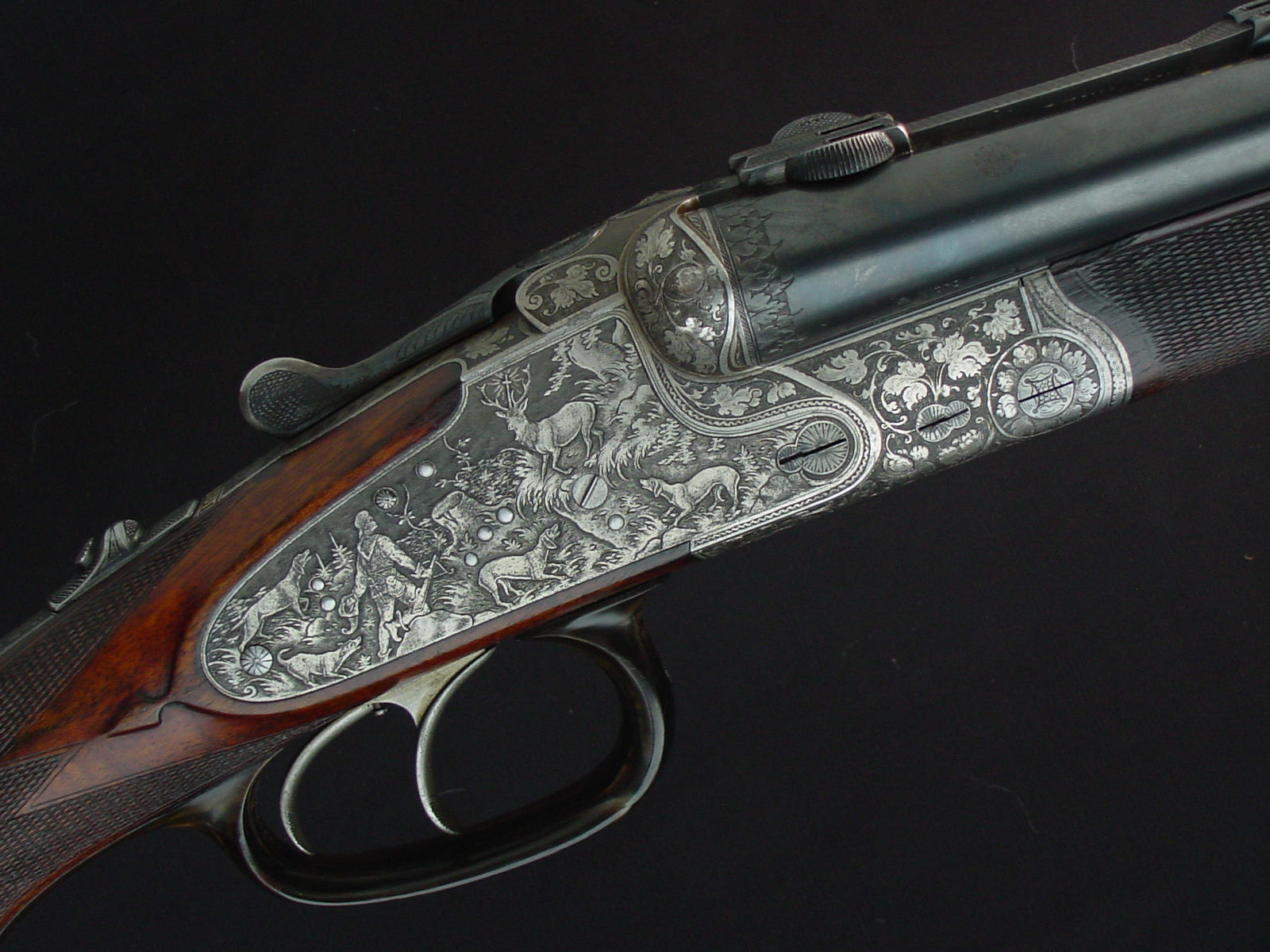 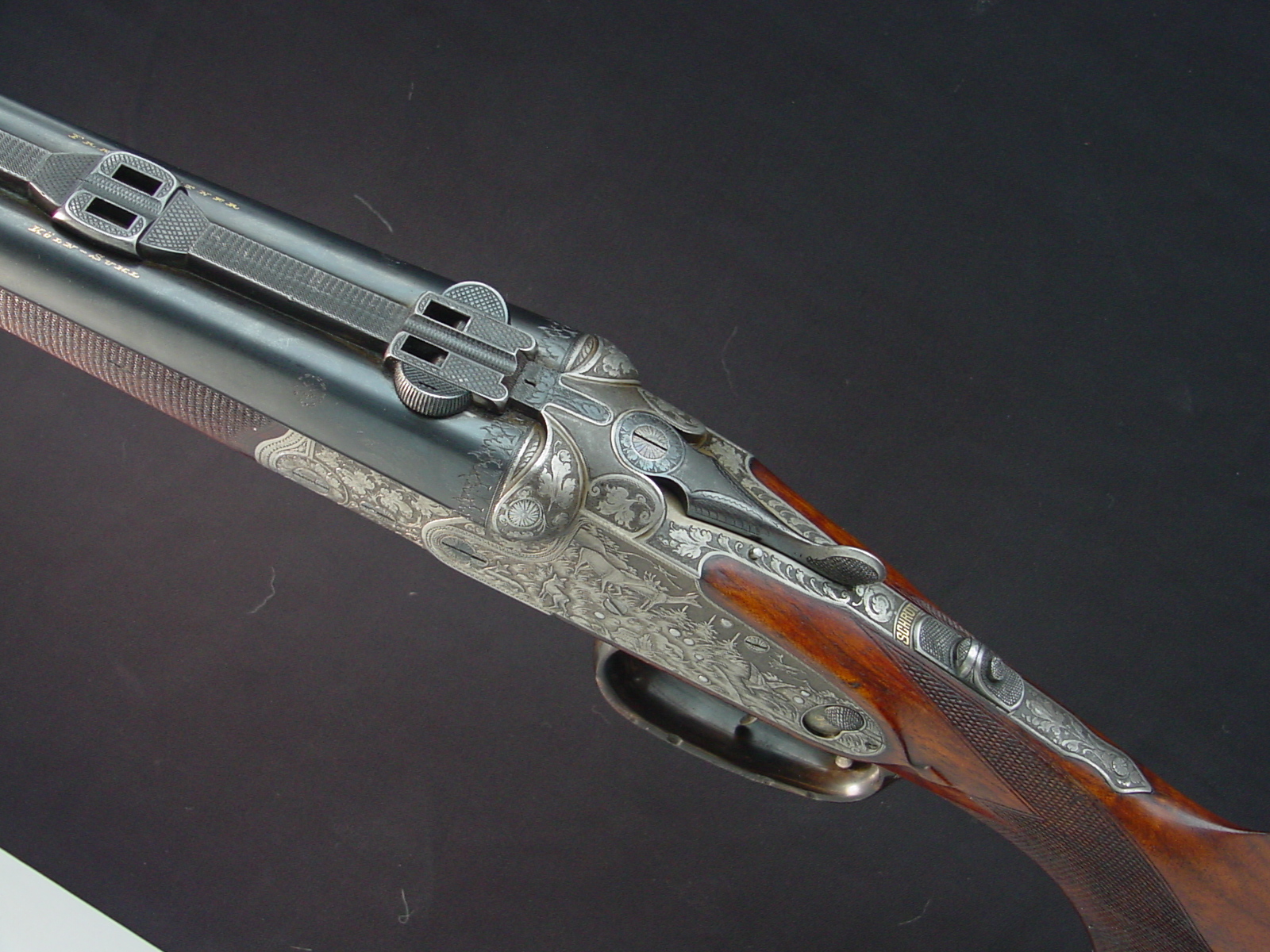 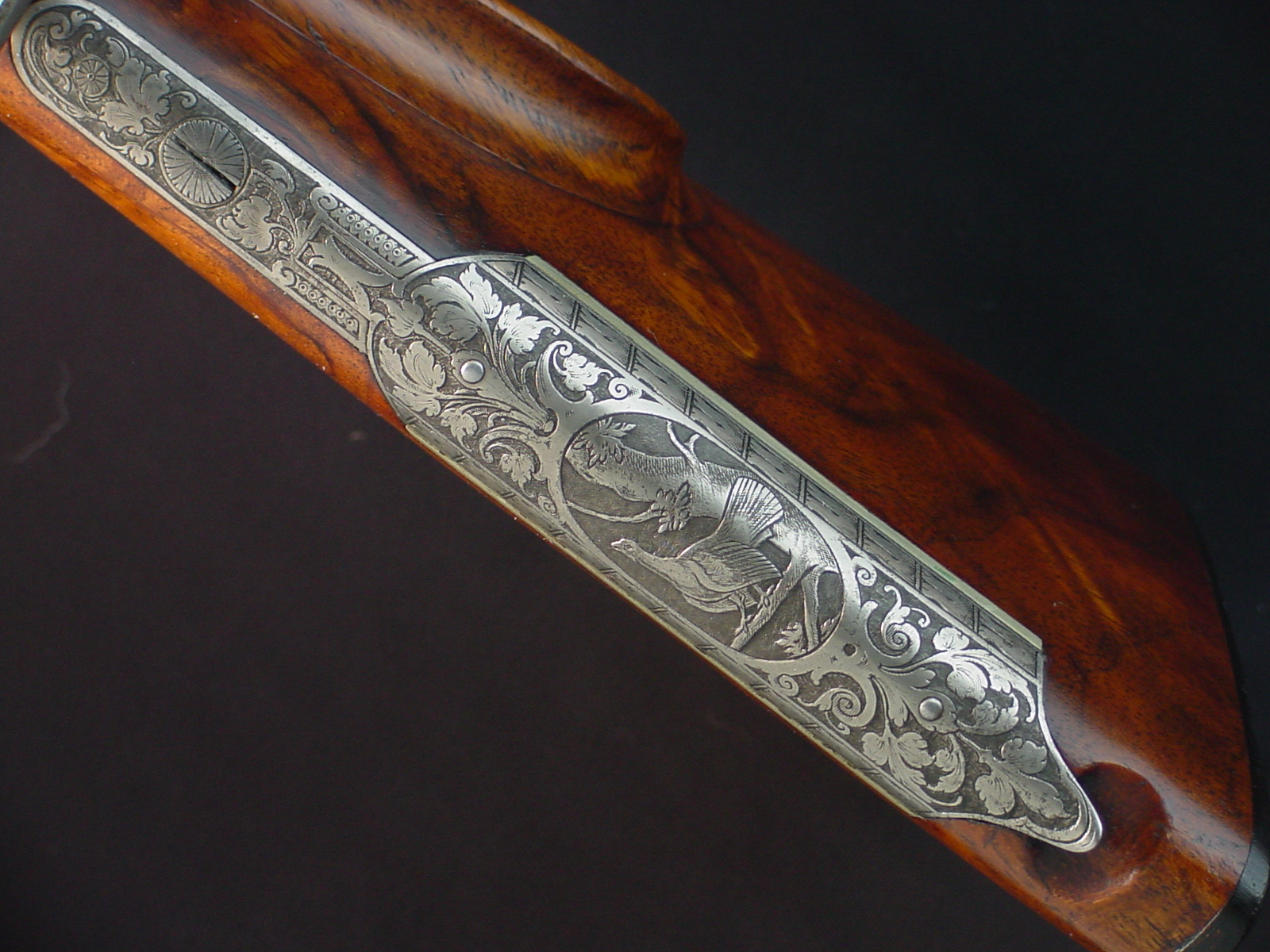 Below is a full length image of a B. Merkel clamshell double rifle.

The following two images are of a Bernhard Merkel double rifle drilling. 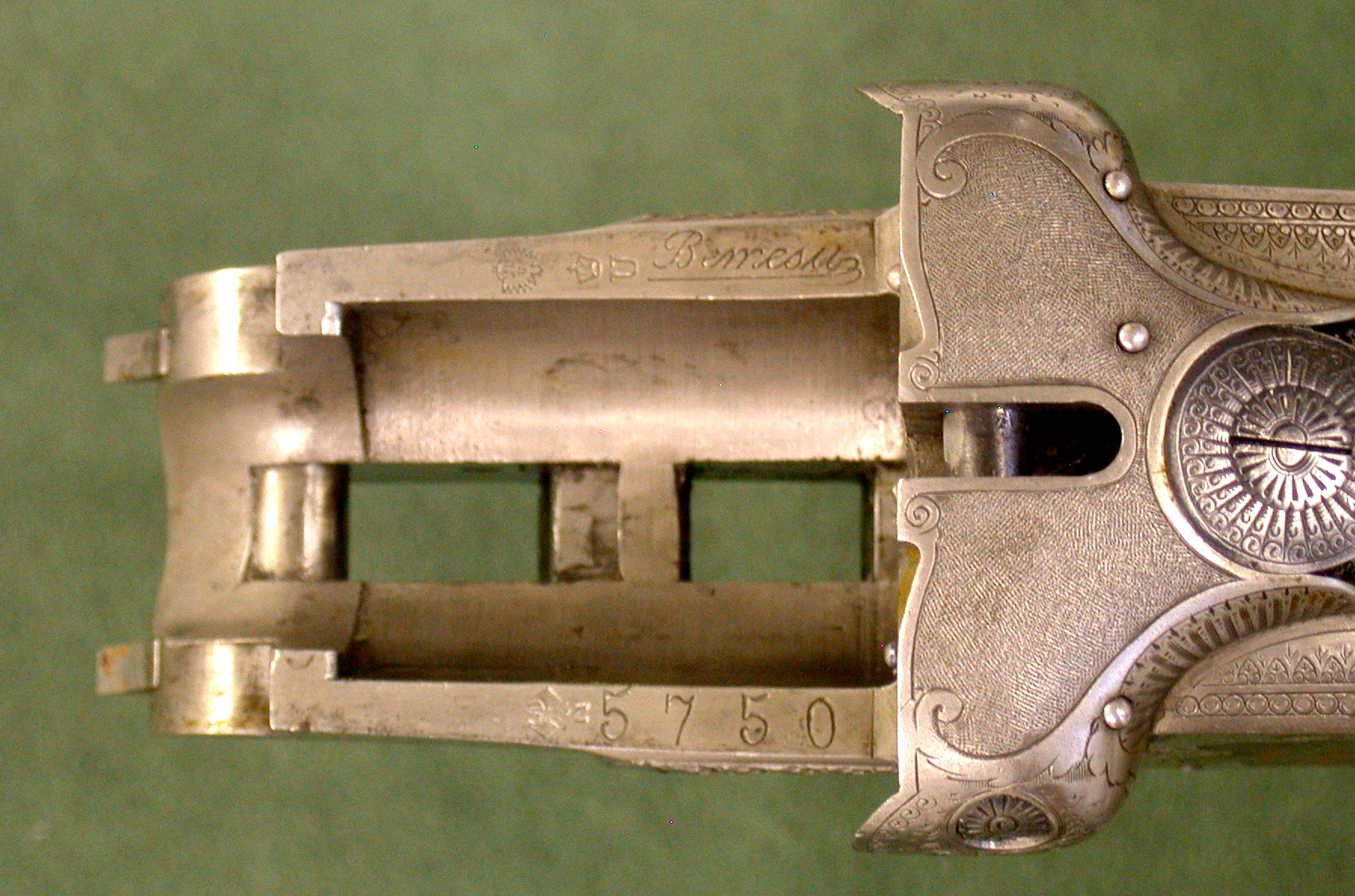 The following two images were found in Dietrich’s archives and were from Mr. Al Rickli and show a Bernhard Merkel Over-Under combination gun in 16 ga.x 8/57JRS. It also has two sets of additional barrels by Franz Sodia, one in 270 Win. and the other in 20 ga. It is serial no. 7088 proofed in 1942 and the Sodia barrels were proofed in 1978. It is accompanied by a 2.3×7 Kahles scope and a 2.5 x 10 Zeiss scope, both in claw mounts all being cased in a Huey oak & Leather case with a canvas cover. 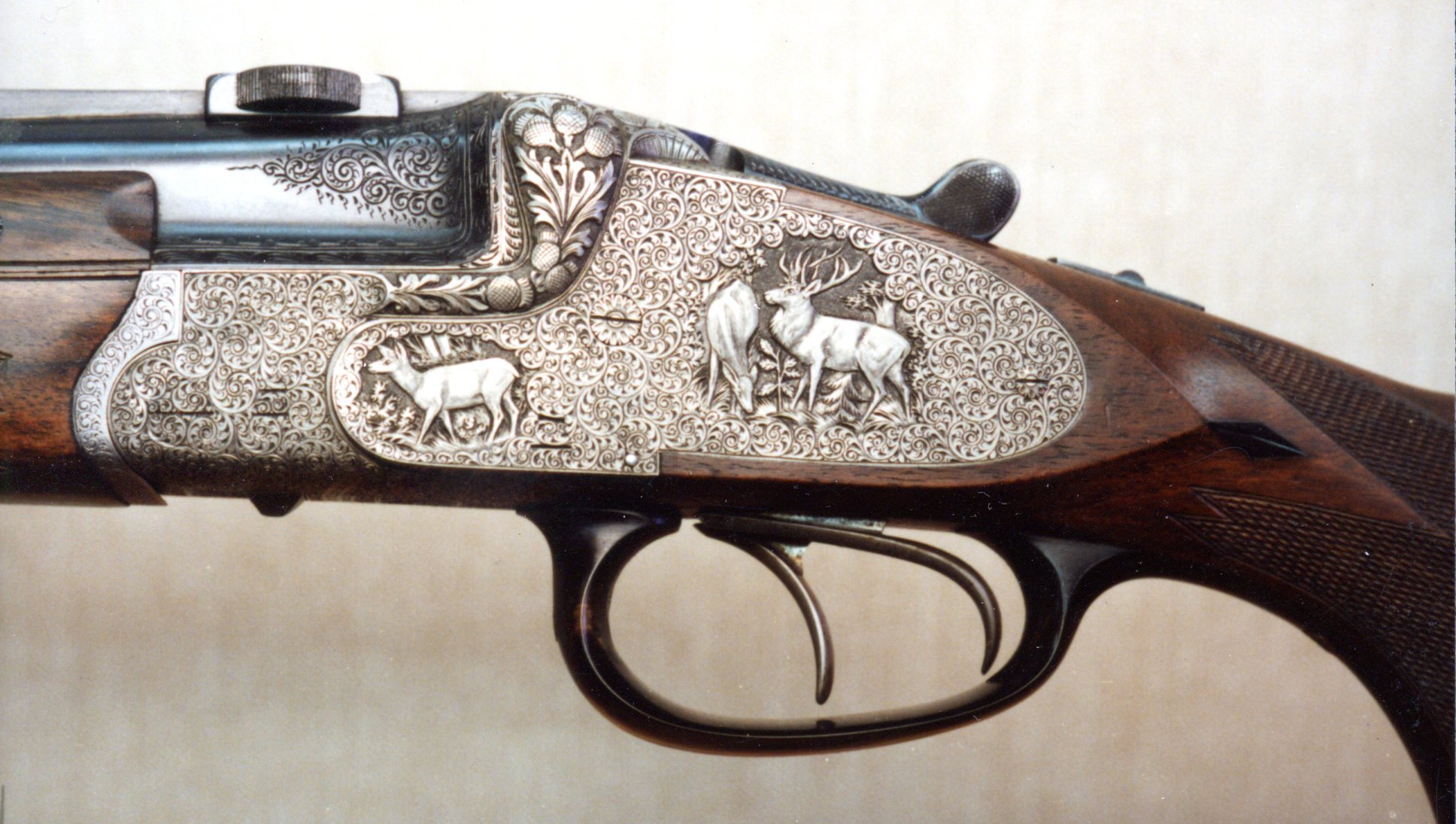 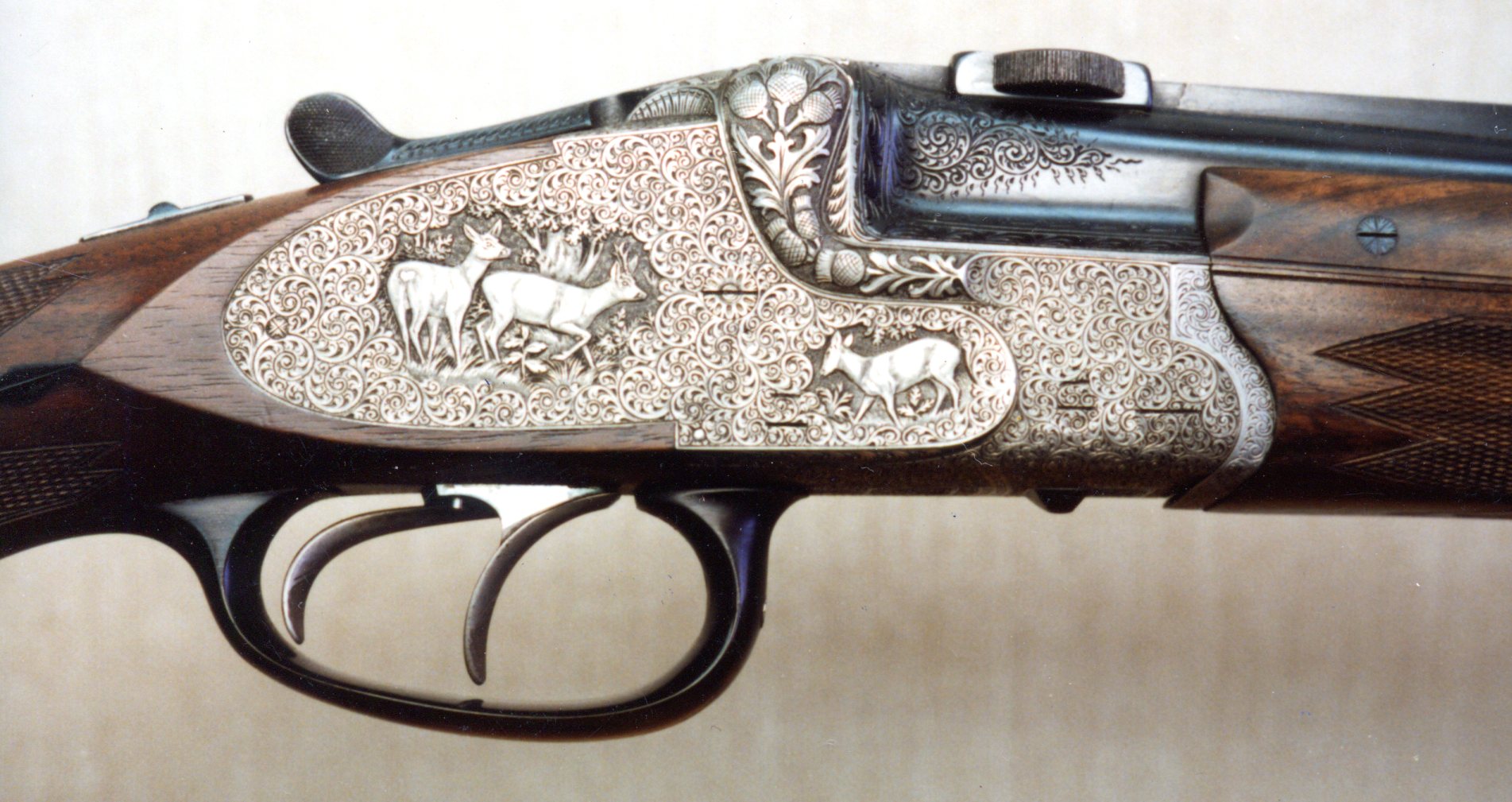 Following are three images from Mr. Rickli of a Bernhard Merkel Kipplaufbüchse (single shot rifle) in it’s original .219 Zipper caliber. It has a 23 3/4 inch barrel, a box lock with side plates and super nice scroll engraving deeply chiseled game scenes and fences with Thistle motif. A Kollmorgen 4x scope in claw mounts. It is serial no. 7031 and was proofed in Aug. 1941. 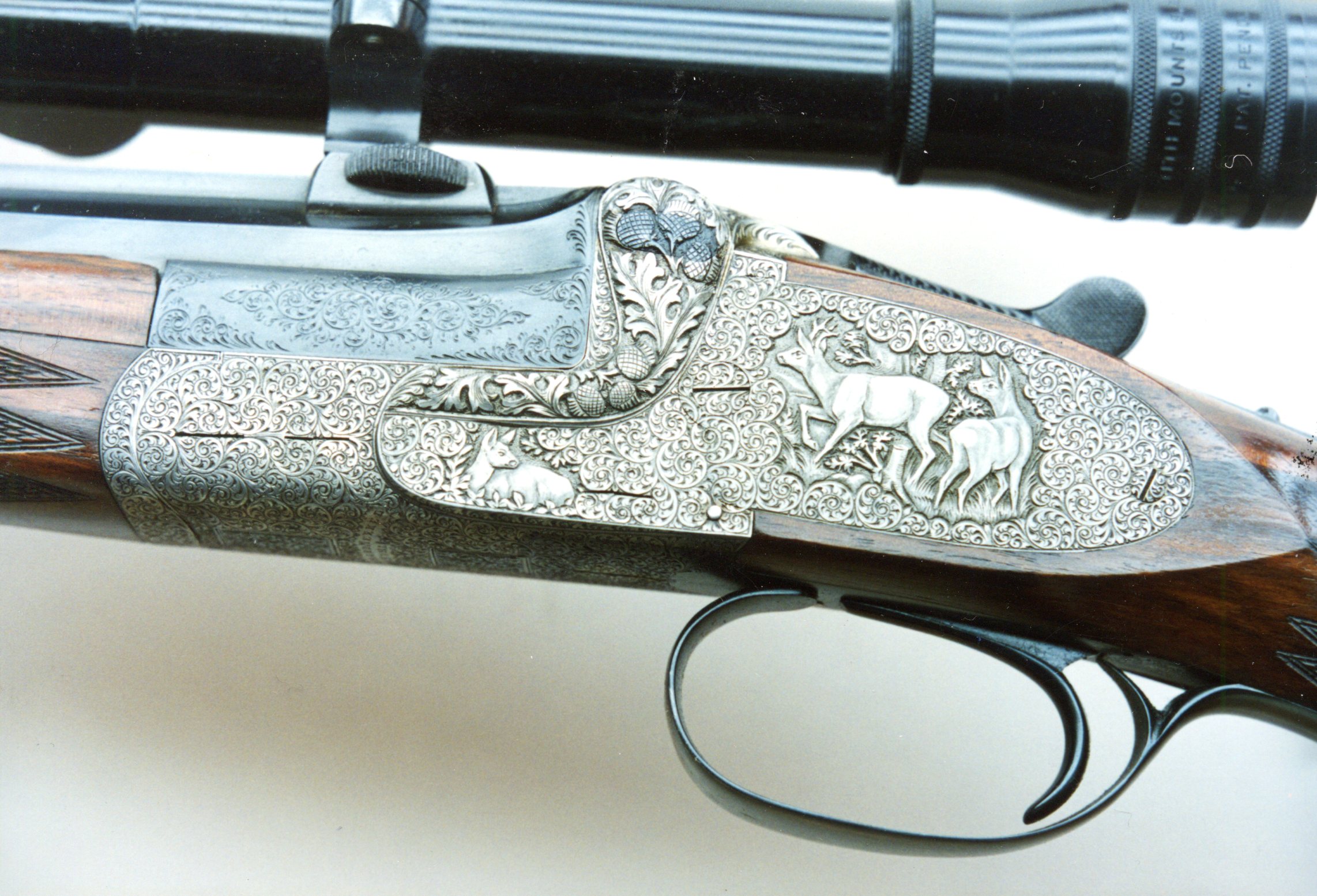 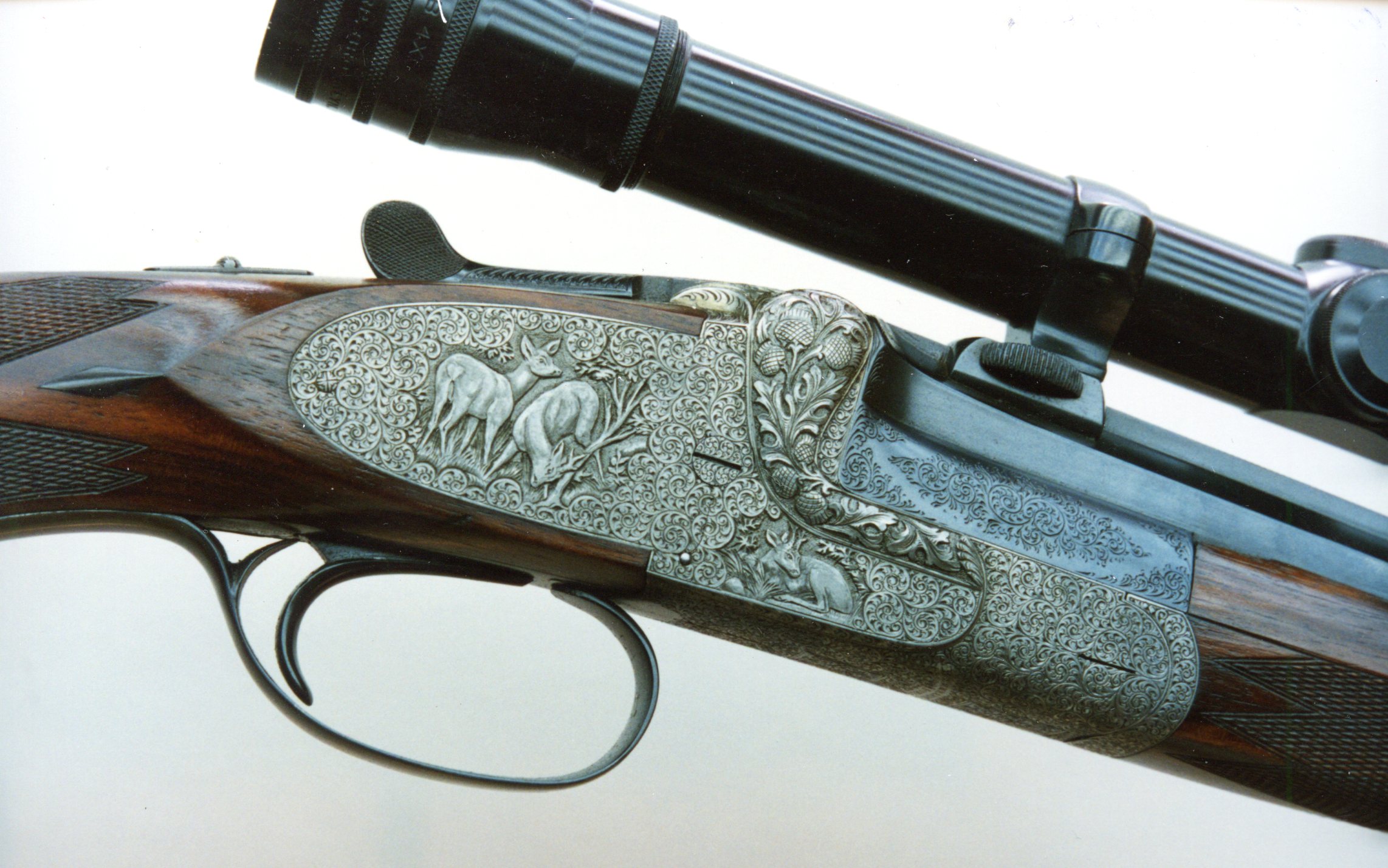 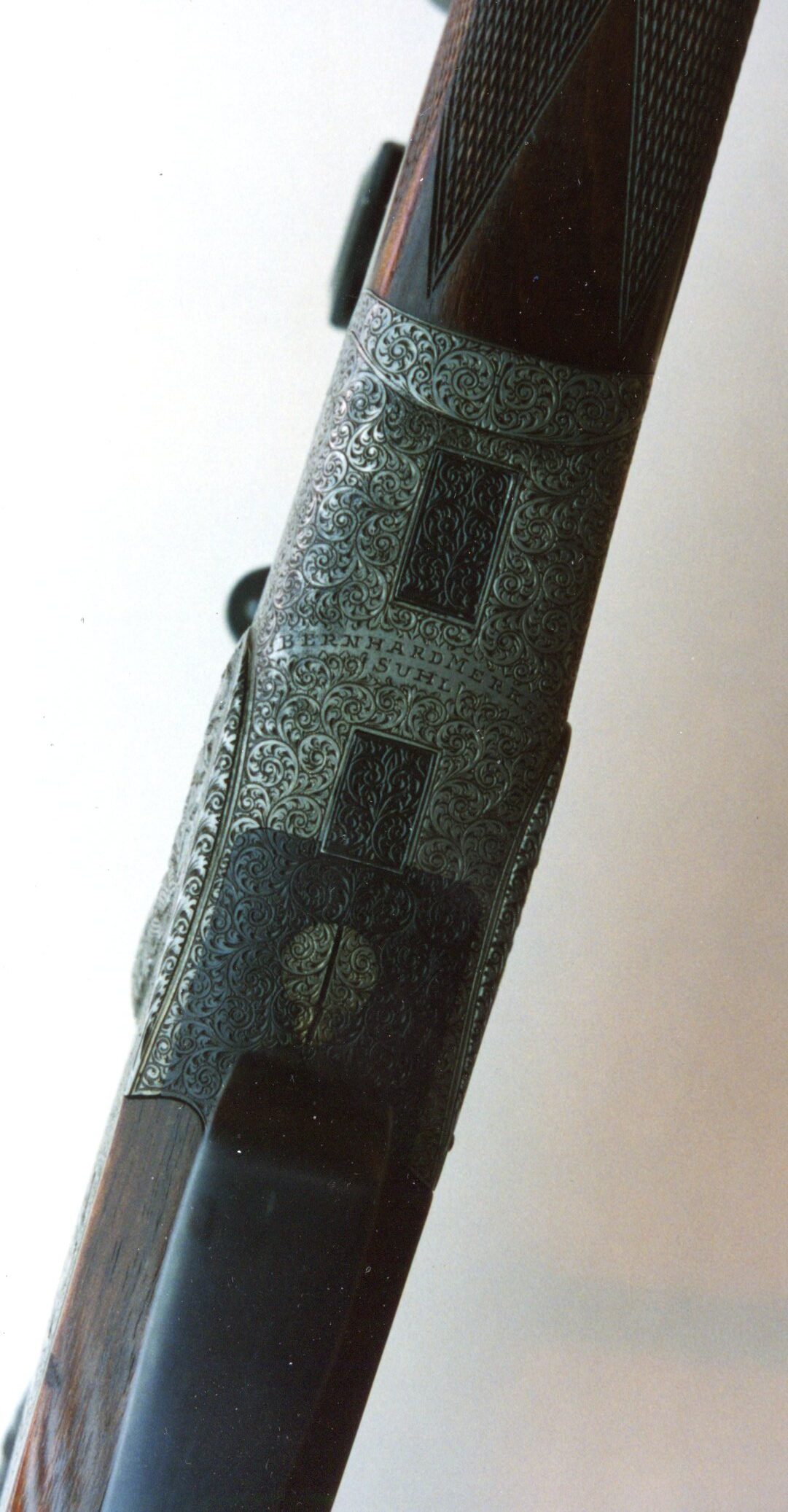 The following article and images detail the history of the Bernhard Merkel firm and the demolition of the B. Merkel home and shop where about 12 craftsmen worked producing their fine guns. 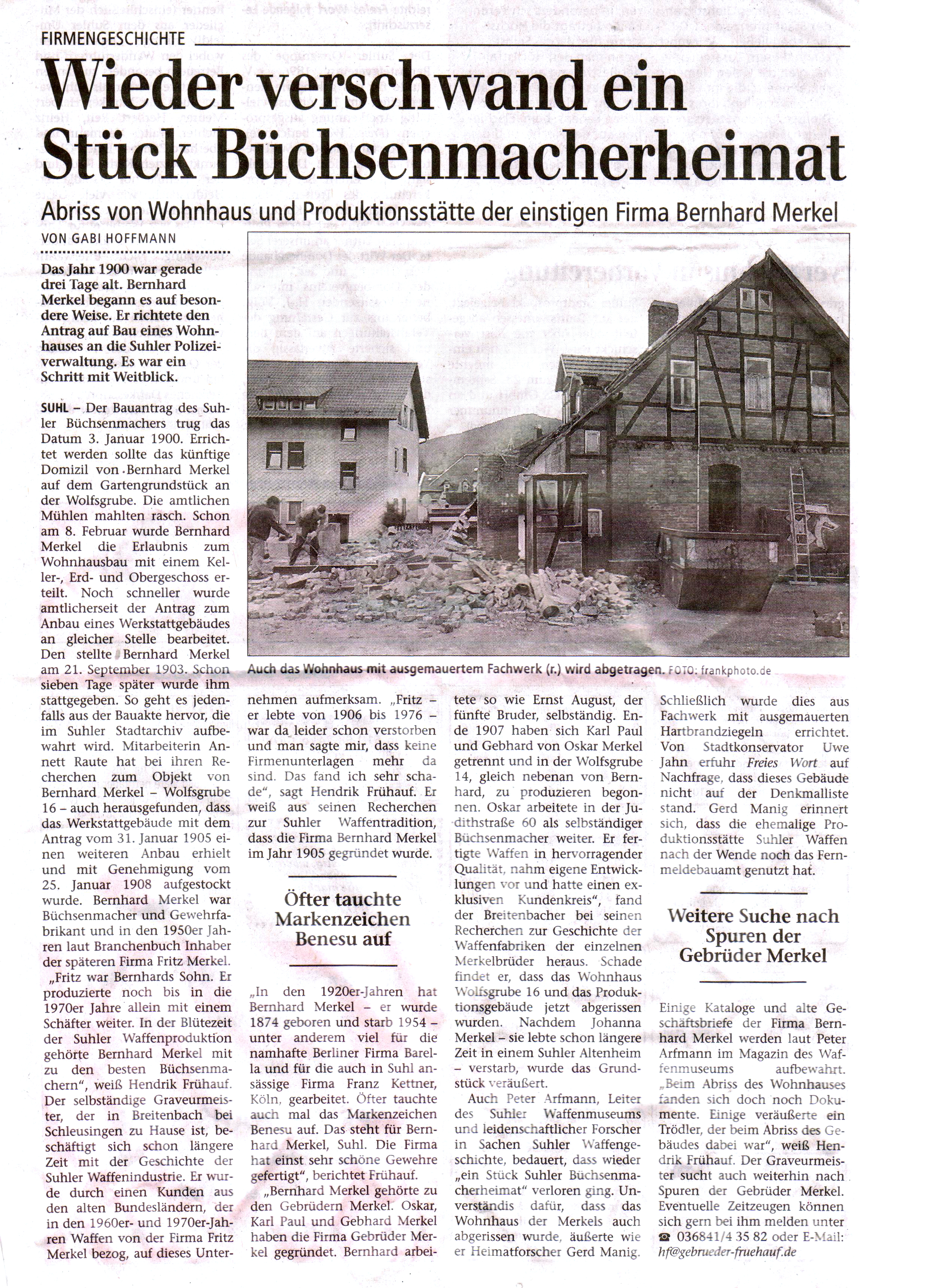 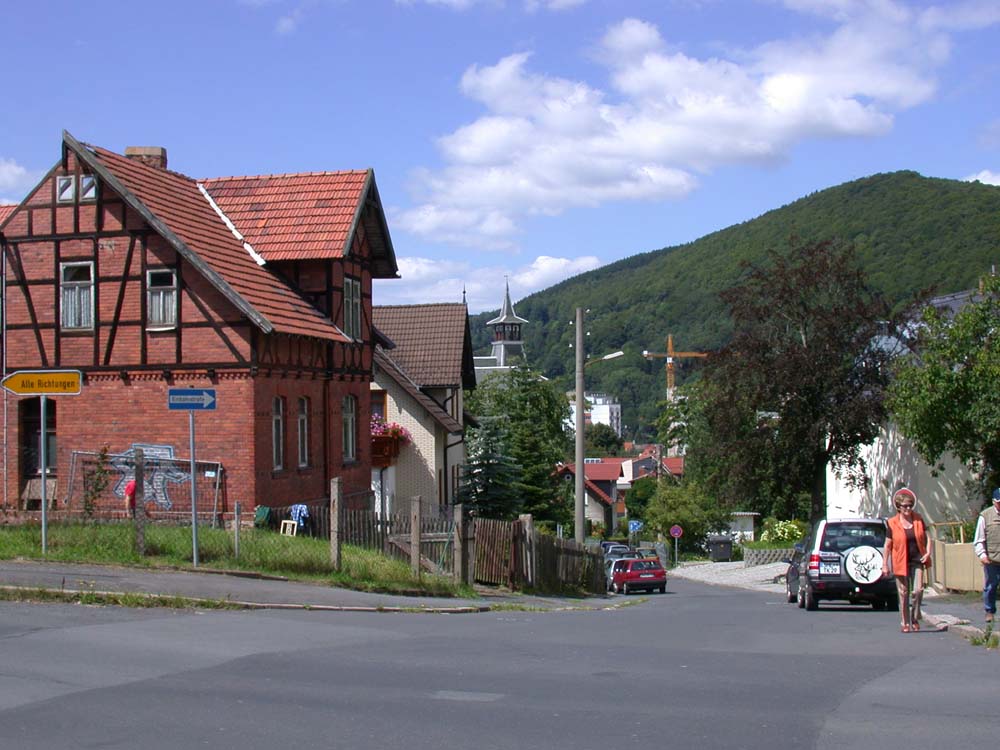 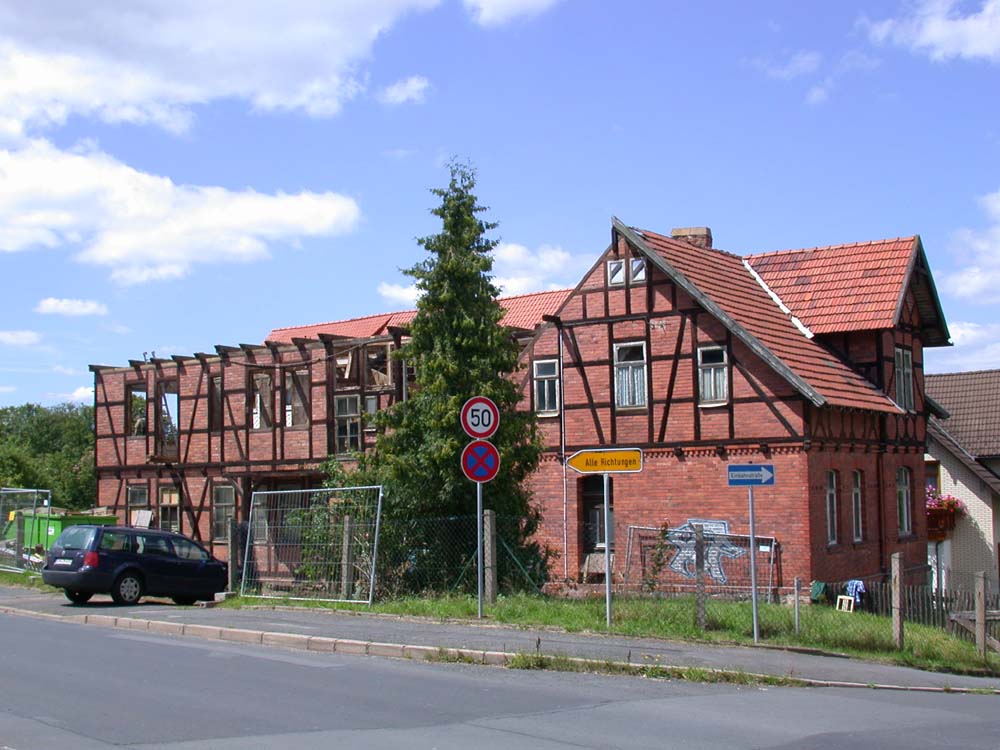 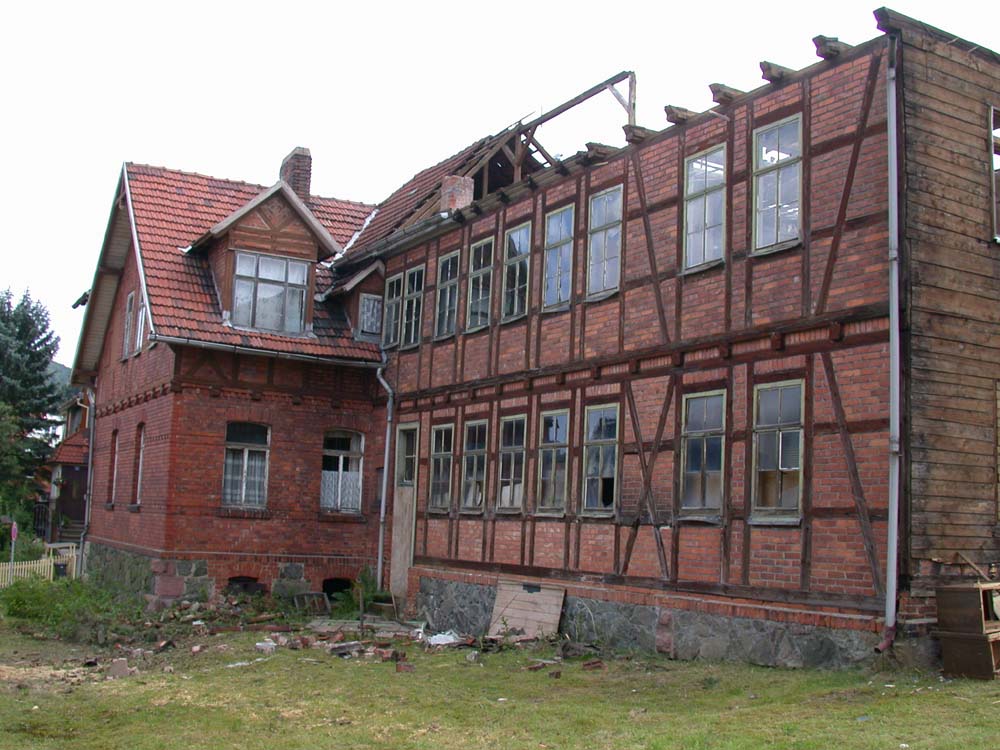 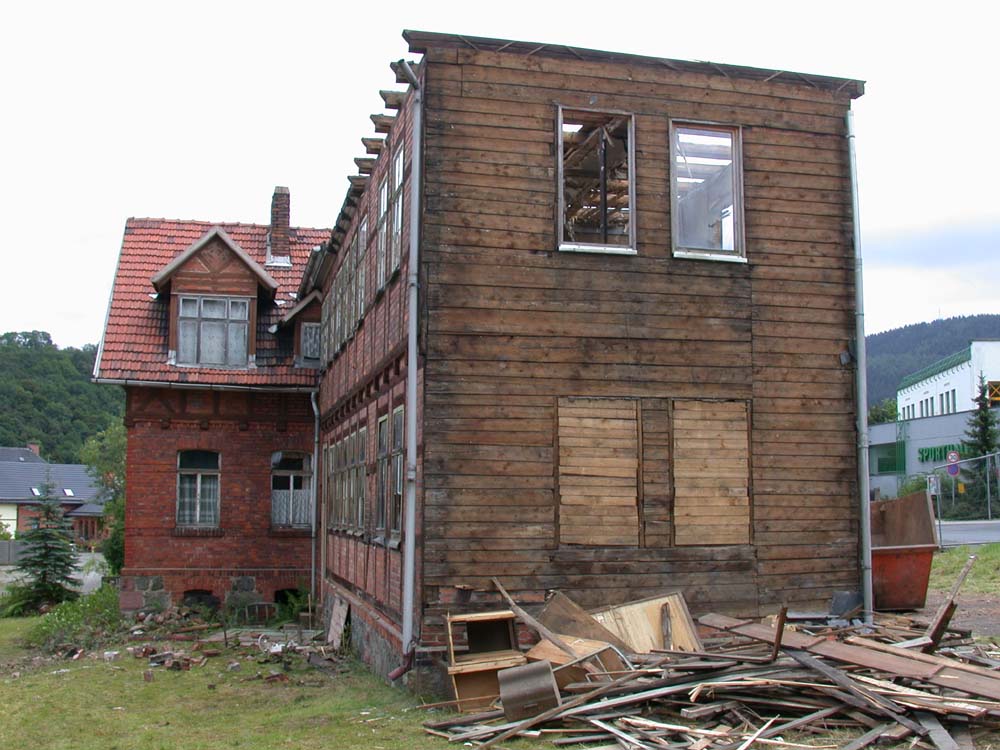 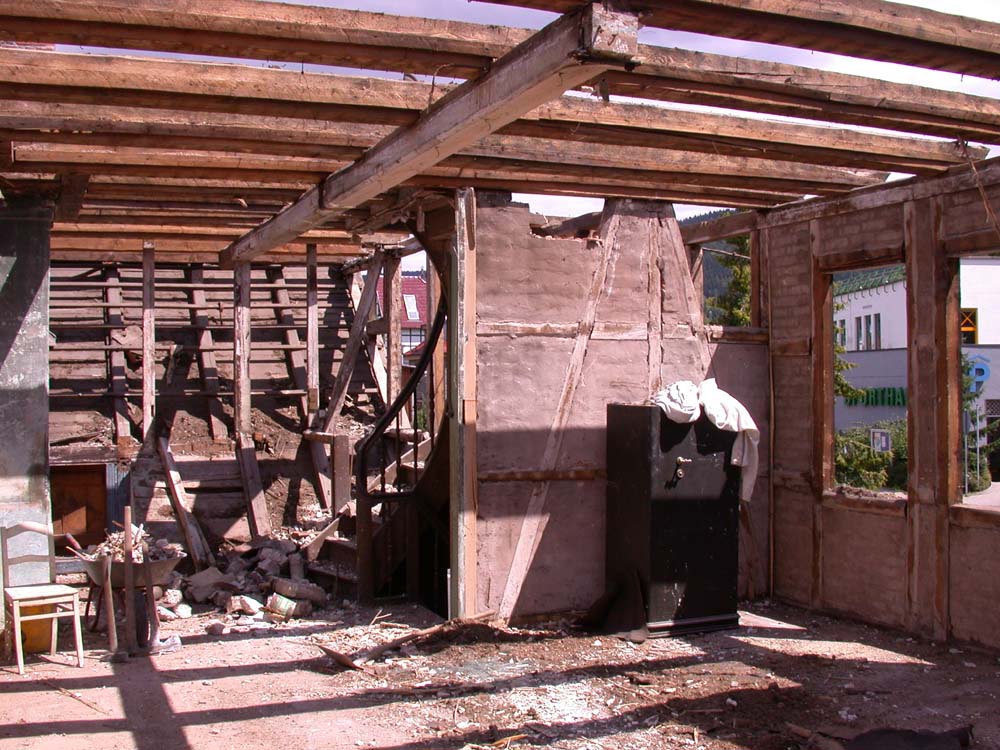 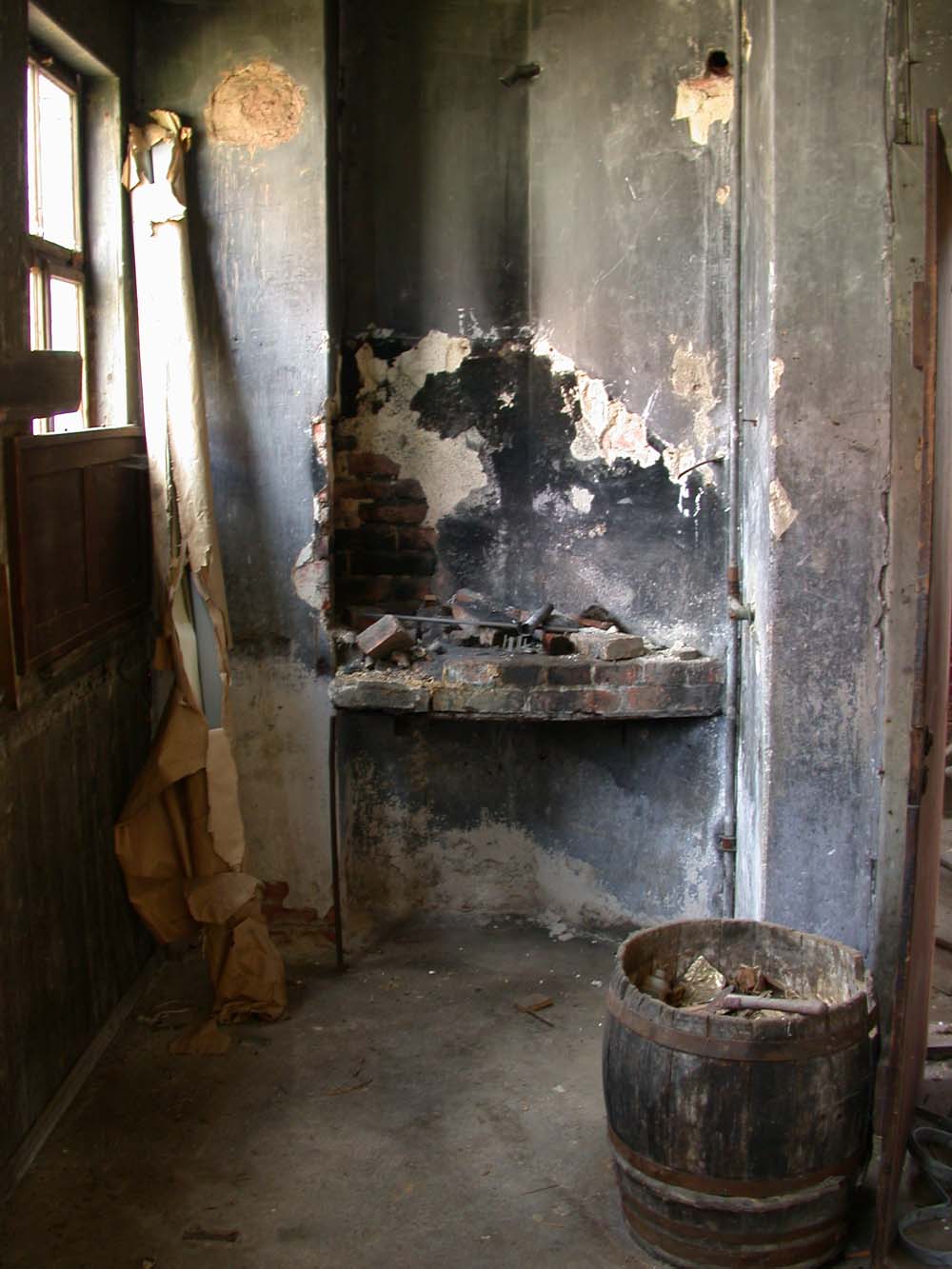 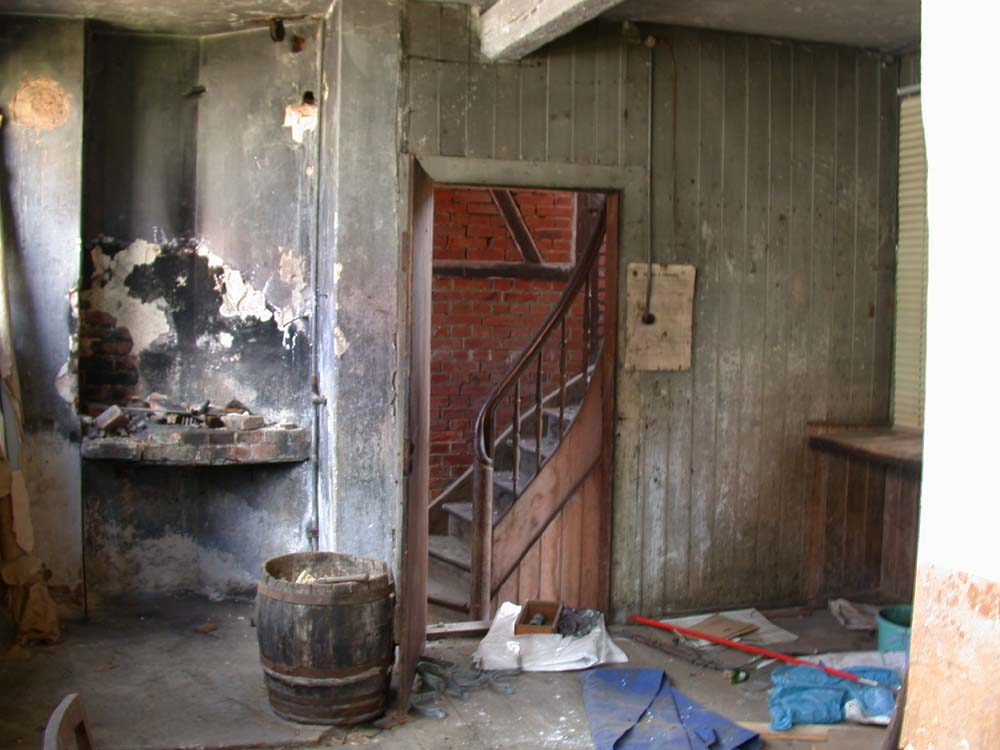 Axel Pantermühl has a small collection of printing blocks used to make some of the Catalogs we love to see. The following images show one of the Bernhard Merkel pages with the copper plate on top of it. The wood backing block had been burned off but the copper plate remains. 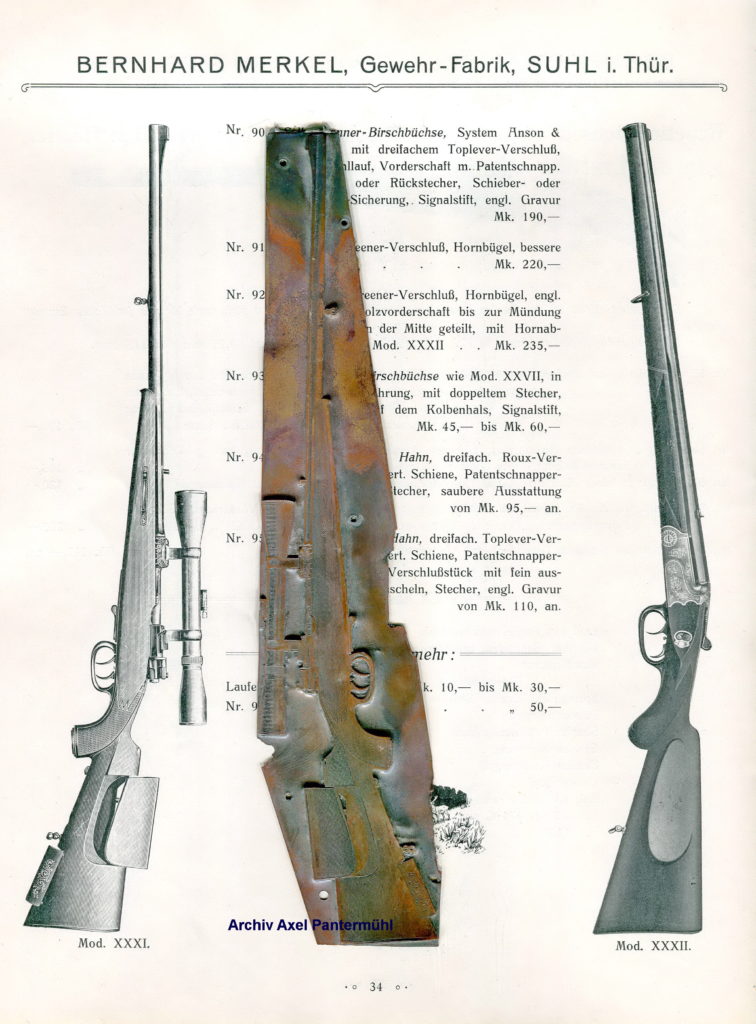 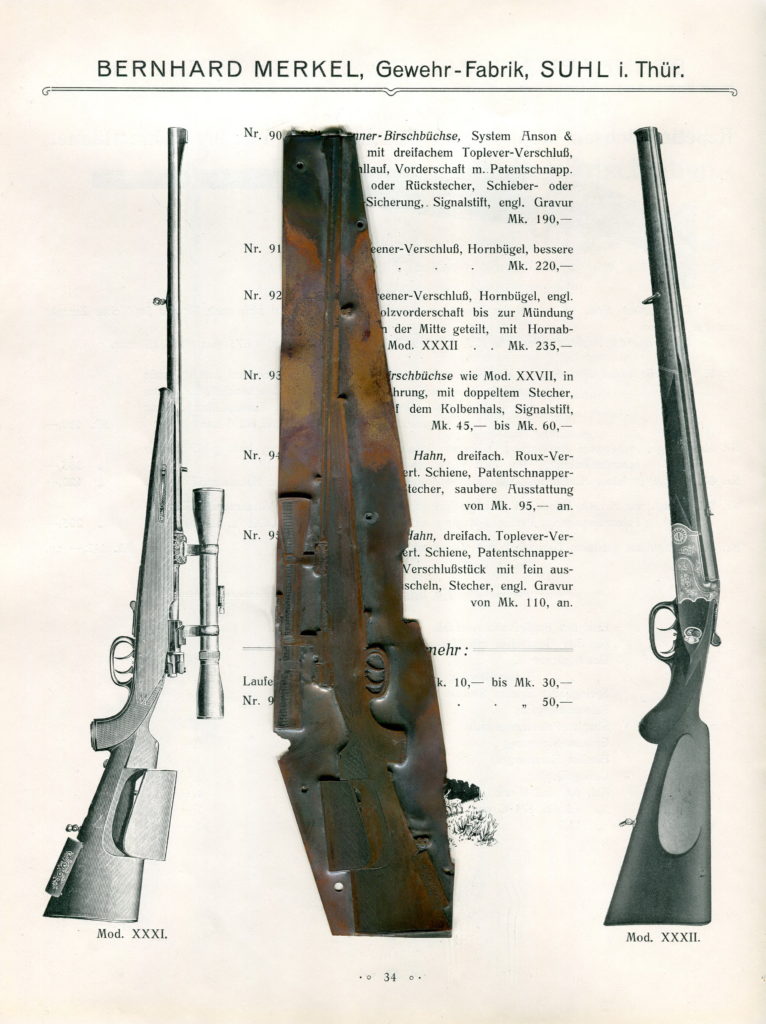