By Larry B. Schuknecht & Axel Eichendorff

Introduced around 1887 The two cartridges known as the Dombrowski-Heissig 14.5 x 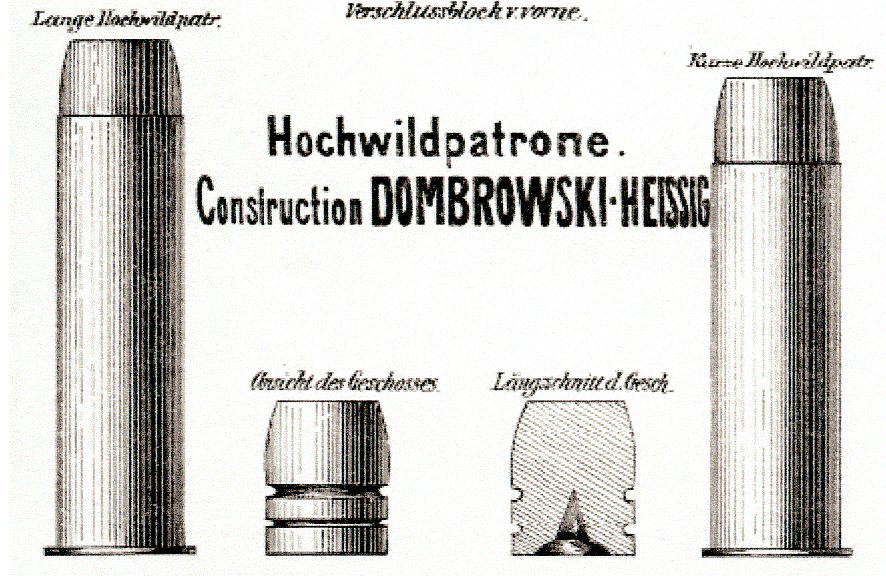 49R and 14.5 x 52R are almost identical with the earlier .577 Snider Military round. No data has surfaced to date that gives the powder and bullet weights for the Dombrowski-Heissig loads. Some referances (one is Shooting the Snider by Larry S. Sterett, 1964 Gun Digest) state that the .577 Snider round came in two differant lengths, a 49mm Carbine length and a 52 mm Rifle length and these lengths also relate to the two D-H rounds. The standard military .577 Snider load was 70 gr. of FG Black Powder.  In the 2 inch (Carbine) case this would fill all but 3/4 of an inch of the case. An examination of a full size drawing of the 14,5 x 49R in the Waffen Lexikon by Richard Mahrholdt shows the powder charge filling all but 7/16 inch of the case. A 577 case filled to 7/16 inch from the mouth holds 100 grains of black powder meaning that the powder charge was probably 95 or 100 grains with a 350-450 grain hollow base flat nosed bullet.  The standard bullet weight for the Snider was a 480 Gr.

German writers for several periodicals at the time were not enthusiastic about the rounds when they were “new”. They noted that already outdated 24 or 28 ga. rifles would do the same thing if loaded with short, light, flat nosed bullets and dismissed the advertising claims of “absolutely deadly accurate and flat shooting to 200 paces (150 yards)” as ballyho. (Ernst von Dombrowski later wrote in Die Birsch that the powder charge being quite low the practical range was 150 steps at best. The rounds were good for close range brush shooting because they produced a good blood trail. It must be remembered that these were open sight times and the old black powder loads would soon be replaced with smokeless powder and the large caliber heavy lead bullets were being replaced by smaller caliber jacketed bullets. These two rounds were for all practical purposes almost obsolete at their birth.

K.K. Artillery Captain H. Heissig was an accomplished gunsmith and gun maker. In 1876 the Austrian Ministry of Commerce asked him to study the conditions of rifle production in Ferlach and to take measures which seemed suitable for bringing this branch of manufacture up to a level appropriate to modern requirements. He instituted essential improvements in both the rifles and their production and improved the machinery used in that production. His efforts in a short time brought domestic work for Ferlach and raised the standard of the domestic material used. Previously the best gun barrels had been sourced from Liège but afterwards Ferlach made barrels that surpassed those that Liège could offer.

A small group of well known gunmakers are known to have specialized in making guns chambered for these rounds. They are Joh. Springer’s Erben in Vienna, A. Antonitsch in Ferlach and G. L. Rasch in Braunschweig.