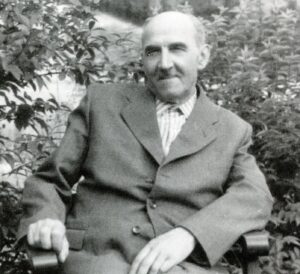 It is the result of the research and writing of Dr. Hans-Jürgen Fritze that we have a clear picture of the life of Edgar and Franz Strempel . Outlined in a chapter of his phenomenal book “SUHL- Heimat der Büchsenmacher” (Suhl-Home of the Gunmaker) we learn about one of the great gunmakers who was recognized in his own time as one of the few in Suhl who applied both his skills as a technician and his eye for the application of art to gunmaking. He was and still is compared to H. A. Lindner,  Heinrich Scherping and Miller & Val Greiss. With the large number of exceptional makers that have worked in Suhl over the years that is saying a lot. Much of the following is condensed from Dr. Hans-Jürgen Fritze’s book.

Edgar was the 2nd oldest of five sons born on Oct. 31, 1890 to Ernst-Dienegott Strempel (June 27, 1857-1934) and Karoline, nee Lehmuth (Oct. 4, 1857-1936). He evidently became interested in gunmaking at a very young age and in his very early 20’s ventured to Vienna during his wander time to experience and learn more about the Arms trade. When World War I broke out he was swept up in the conflict and after being wounded near St. Laser in France and spending a year in a prisoner of War camp, he returned to Suhl. Within a few years of the ending of World war I the German economy was thrown into chaos with a depreciation of the Duetsch Mark and great unemployment. In spite of this Edgar was able to secure a position as a Gunsmith with Gebhard Merkel at Bahnhofstrasse 23, Suhl. Here flourished and improved both his Gun Making skills with his artistic sensibilities. During the early 1920’s Edgar met Elli Schaller (Oct. 22, 1892-jan. 15, 1966) the daughter of the Master Gunsmith Hermann Schaller. Meanwhile Edgar left Gebhard Merkel and went to work at Simson & Co. and worked in their Waffen production. Edgar became a very familiar face in the Schaller shop and was well known there when Hermann Schaller passed away on sept. 3, 1926. On December 12, 1926 Edgar and Elli were married and with that the future of the Schaller shop at Stadelstraße 16 sat on Edgar’s shoulders. At this time the now Strempel shop employed four other craftsmen working on the barrels, stocks and engraving. On March 2, 1930 a daughter anneliese was born to Edgar and Elli and as she grew up she was no stranger to the Strempel shop. When old enough she worked as a Laffer ( a person, usually a youth who relayed gun parts or assemblies between the makers and individual craftsmen).

Edgar never served in a formal Master Gun Makers apprenticeship and therefore did not have a Master Gun Makers Certificate from the Gun Makers Guild but his skills and artistic senses were well recognized by the Guild which allowed him to have and train apprentices. This was an unusual occurrence in a highly regulated field. One self employed worker that Edgar thought a lot of and relied upon was the Locksmith Guido Kessel. Edgar stated that a Gun Lock made by Guido performed as precisely as a Swiss Clock.

In the early 1930’s Edgar cultivated sales in Germany through business with other Arms dealers. He drove his Brennabor ( a car made by the Bennabor-Werk AG which was based in Brandenburg an der Havel near Berlin) loaded with sample cases to Hanover, Koblenz, Cologne and Stuttgart soliciting customers and business. One of these known Arms makers/Dealers was Wilhelm Eblen in Stuttgart who applied his name to the Edgar Strempel guns he sold, a common practice at the time. Edgar also displayed his products at many Trade Fairs during this time. In 1936 Edgar replaced his Bennabor with an Opel-Olympia model car. During this time Edgar was able to enjoy hunting with a friend- the master painter Erich Kelber. The average work day amounted to 10 hours with a 1 hour lunch break spanning the hours of 7:00 am to 6:00 pm week days and 7:00am to 12:00 noon on Saturdays. Besides the usual everyday gun work the Strempel business also welcomed special orders. One example was a special order generated from the Robert Eblen (who took over the W. Eblen business in the late 1920’s)  business at Lange Straße 14, Stuttgart. Robert was a friend or acquaintance of a Mr. Truchsess who operated a successful Chocolate business in Stuttgart. He was one of the manufacturers and suppliers of Scho-Ka-Kola or Aviator Chocolate. This was a Chocolate that was heavy in Caffeine  which was given to flight crews to enhance performance and keep them awake on long bombing missions during the War. Mr. Truchsess was friend and hunting companion of Herman Göring. They both enjoyed hunting in the Black Forest. When Mr. Truchsess decided to present his friend Hermann with a presentation rifle, he went to Eblen with the Commission who in turn placed the order with Edgar Strempel. Other workers who contributed their skills to the rifle were August Wülfling, the inlays on the stock was done by Karl Kolb of Judithstraße 41 and engraving by Richard Schilling of Trübenbachstraße 5.

Other self employed workers that Edgar depended on were the barrel maker Schilling in Gothaer Strasse, the stock makers Ernst and Karl Röll at Kleine Backstraße 2, Hermann Willig at Yorkstraße 4, the engravers Alfred Hommel at Wolfsgrube 8 and Franz Heim at Dalienweg 8.

During World War II the Strempel shop performed the War work required by the Government for the military. They supplied parts to the Heinrich Krieghoff factory for their on board weapons program. Krieghoff used foreign slave labor to transport parts to and from the various suppliers in hand carts. When these laborers arrived at the Strempel shop in Stadelstraße from the Krieghoff plant on Rimbachstraße the Strempel family often supplied them with a small meal to supplement their meager rations (often barely enough to keep them alive). When the War ended and these workers were allowed to return to their homelands, these people made it a point to return to the Strempel family to thank them for their kindness and for what they had done for them.

The American forces liberated Suhl from Nazi control on April 3, 1945 and everything in the Strempel workshop and storage rooms were confiscated and sealed. Almost immediately though, American officers came and placed orders for hunting guns and the seals were removed and Edgar and his Systenmacher August Wülfing were allowed to return to work. By the time the Americans left Suhl on July 1, 1945 two complete guns were finished. When the Soviet’s came into Suhl the Weapons shops experienced the same confiscation and sealing again but the new officer’s in charge soon opened the Strempel’s shop so work could be resumed to make hunting weapons for them. Edgar also sold Waffen to the Zossen Co. in Russia.

Edgar was involved in the founding of the Bühag in March of 1949. Edgar began making high end guns for presentations to Soviet Dignitaries and Military Leaders such as Nikolaj Bulganin who was the Soviet prime Minister at that time. He also did business with Heinrich Münch in Aachen who specialized in the sale of high end Suhl hunting guns.

In the early 1960’s Edgar received official recognition of his Craftsmanship and Talents. On Aug. 9, 1963 he was presented with the Gold Medal of the Chamber of Crafts and on March 31, 1965 he was awarded the honorary title of Master Craftsman. This was significant because he had never taken the examination necessary to become a Meister Büchsenmacher.

Edgar worked right up to his last week of life. An order for a over-under shotgun was placed with him on May 28, 1975, the last day he worked in the shop. On Sunday June 1st he entered the Hospital with a bleeding Stomach Ulcer and passed away on June 6, 1975. His friend Hans-Kurt Bornmüller who was with Edgar when he passed away said of him “Edgar Strempel was a man whom I valued very much and who probably rightly so was considered one of the most capable Master Gunsmiths in Suhl”.

This is a work in progress, next will be Franz Strempel 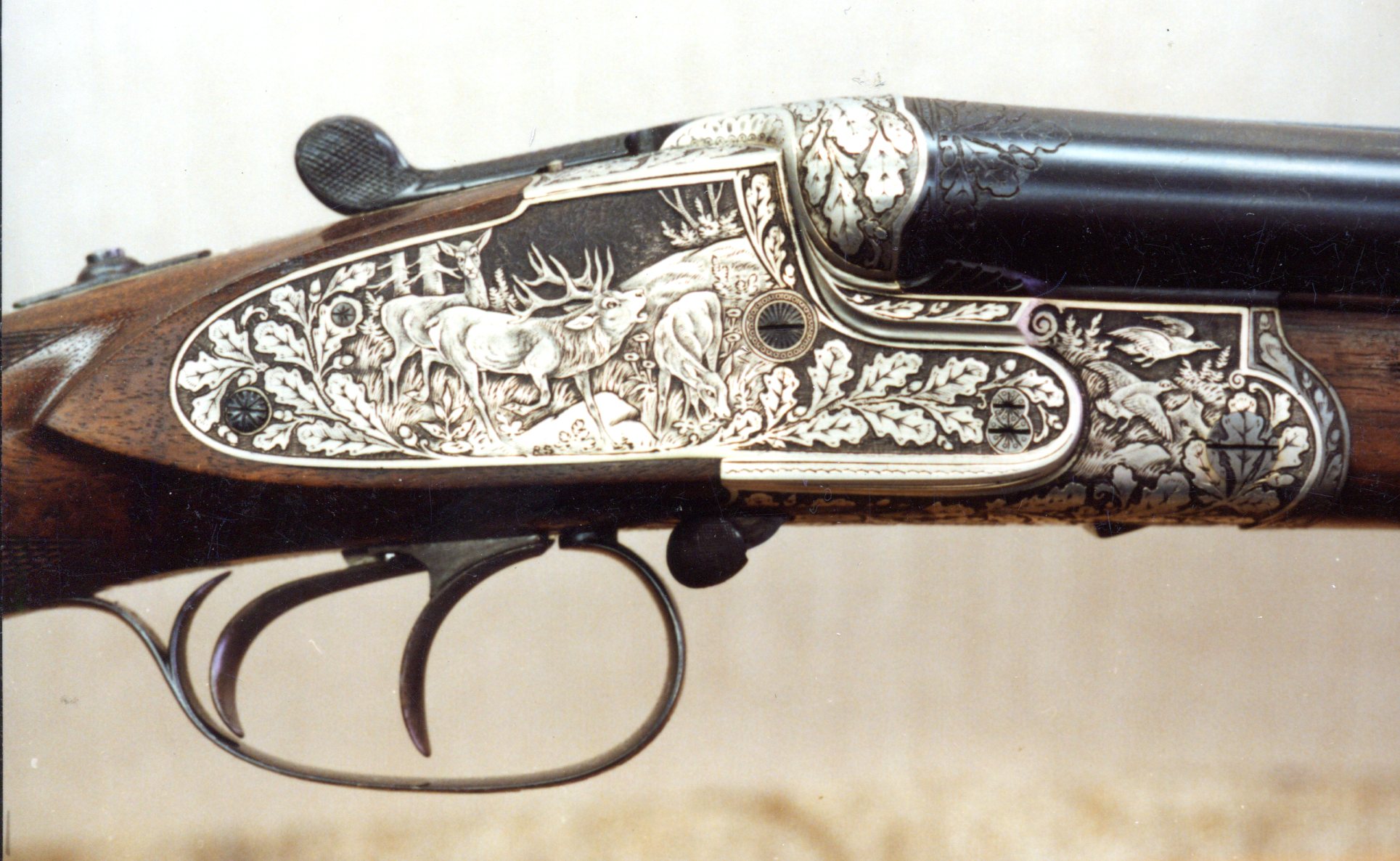 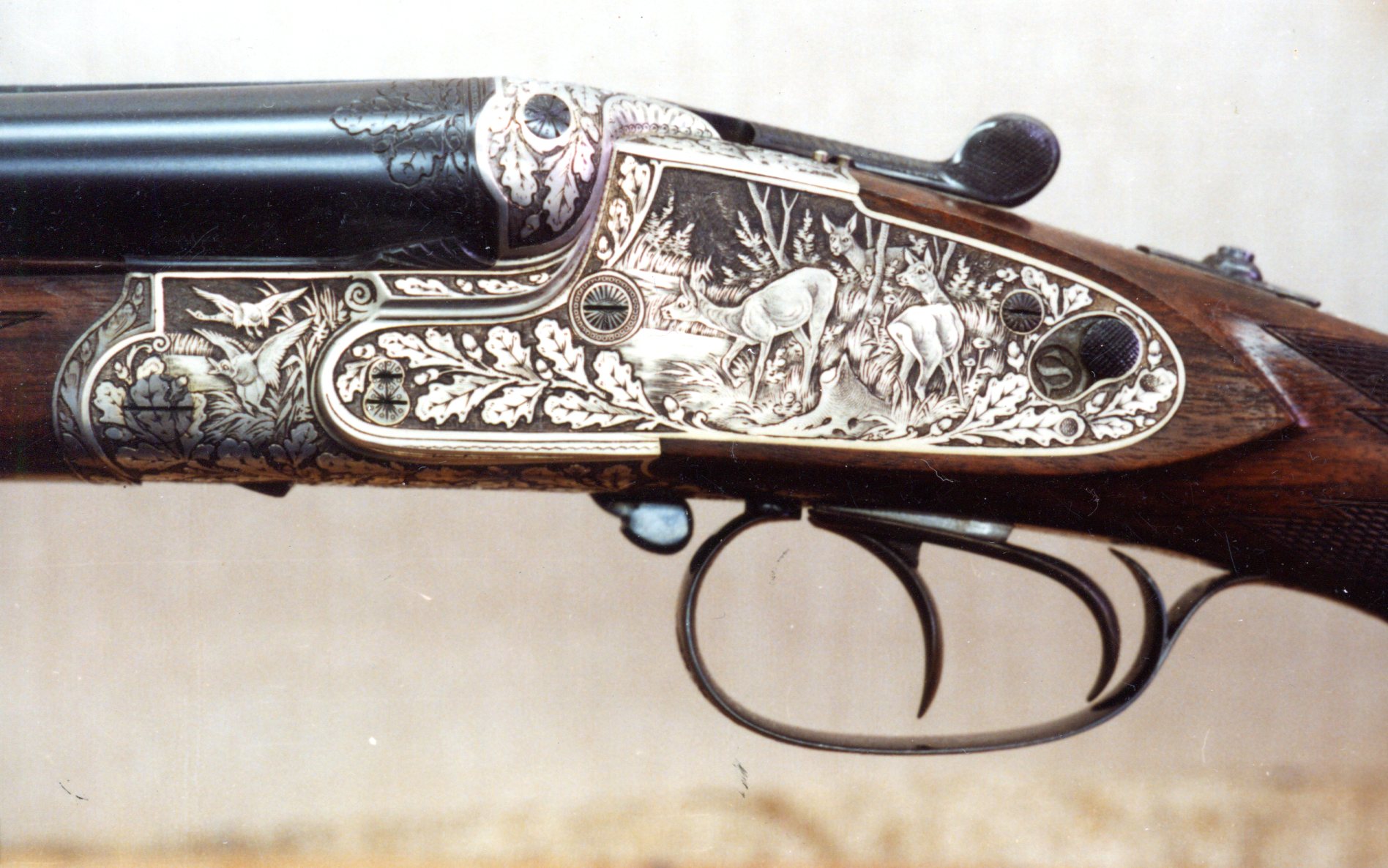 The following two images are from the 2020 GGCA Calendar and are used courtesy of the GGCA. 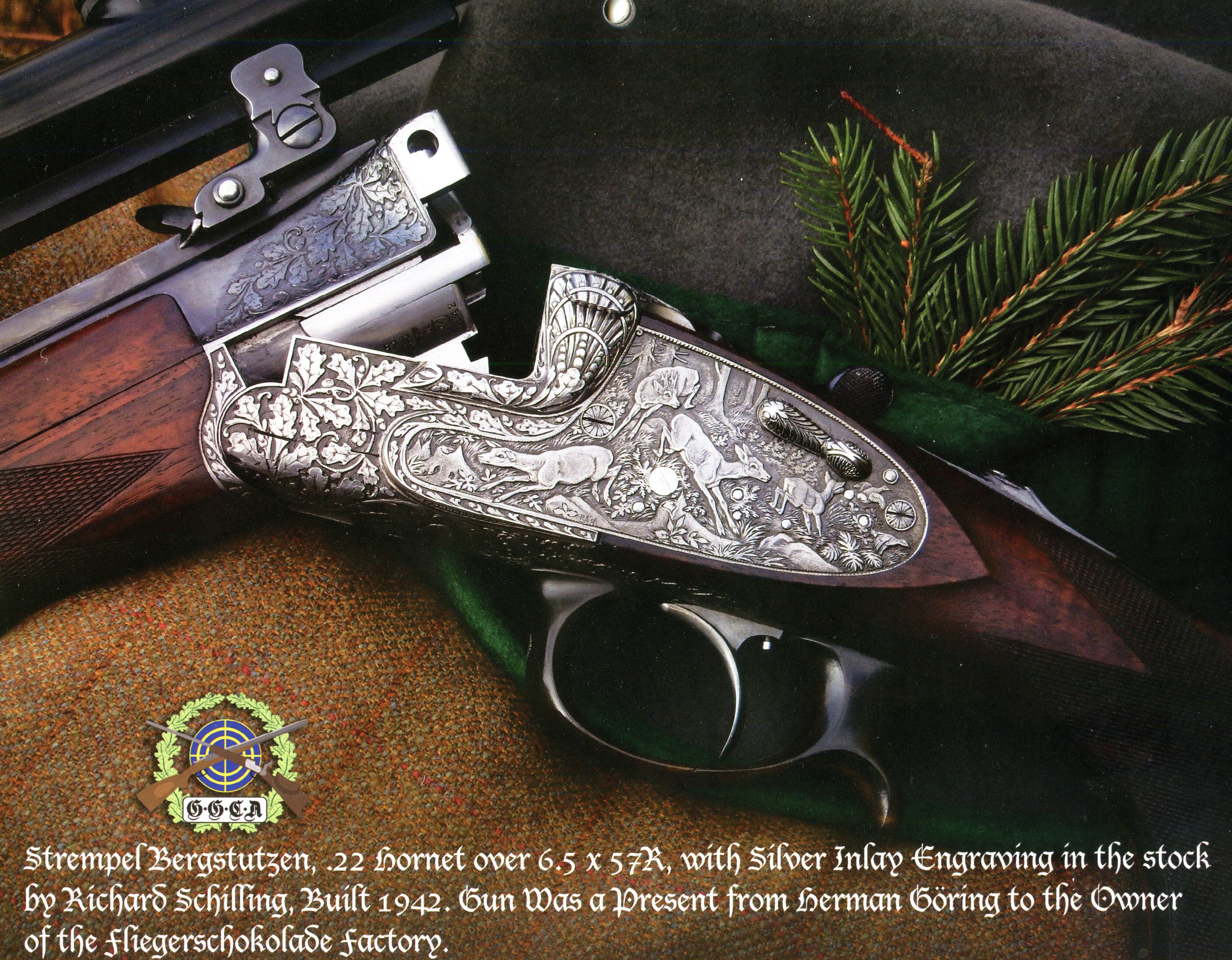