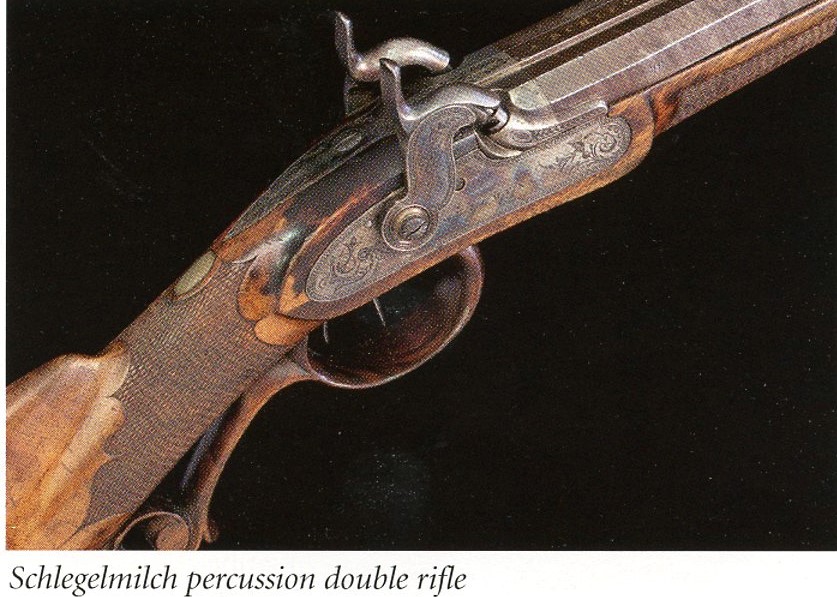 The following references form the basis of this web page-

Dictionary of Guns and Gunmakers by John Walter

Directory of Makers & Tradesmen compiled by Jesse Thompson from Vol.2 of Alt Scheibenwaffen.

Also I would like to thank Axel Pantermuhl for information he supplied.

August Schlegelmilch, Spandau- was granted German Patent no. 29266 on March 5, 1884 for a block action for breech loading guns. It is not known if there was any production of this design. August died at Hirschbach near Suhl in 1941.

A. Emil Schlegelmilch, Suhl- Diana Haus, a gunmaker in Suhl in 1919.

Casper Schlegelmilch (A) worked in Suhl, circa 1846

Casper Schlegelmilch (B) Trading in Suhl in 1914-20 as a specialist gun barrel maker, under the ownership of Enst Wilhelm Schlegelmilch

H. Schlegelmilch, Zella-Mehlis, listed in 1939 as a master gunsmith

Hermann Schlegelmilch (A), Zella St. Blasii- Gun barrel maker at Meiningerstrasse 47 in 1912. By 1935 was at Haupstrasse 47 and in 1936 they were listed as a gun barrel factory at Adolf-Hitler-Strasse 78 in Zella Mehlis. The firm also had an adress in Suhl, but it is not known if they had any production capacity there.

Hermann Schlegelmilch (B), Suhl, registered as a gun stocker shortly before 1939

Herman Schlegelmilch (C), born in Suhl in 1830 and learned the Gunmakers trade there, emigrated to the United States in 1853, 1853-1855 in New York, Bethlehem,Pa. and Chicago, Ill. 1855-1860 in Beaver Dam where he started his own business and met Augusta Krueger whom he married. They were in Ceder Rapids, Iowa for a short time before moving to Eau Claire in oct. 1860 where he built a Gun Shop and Hardware Store at 217 South Barstow.

Louis Schlegelmilch, Spandau- a gunmaker associated with the German Reichsgewehr, and also with a primitive semi-automatic pistol. Granted German Patent no. 76257 of Oct. 1, 1893 for unique Bolt Action Rifle. Below is a slider of the story about the Schlegelmilch Bolt Action from the DWJ.