The Kerner family in Suhl has been involved in the Gun Making trade since the 17th Century. Hans-Jürgen Fritze in his book Heimat der Büchsenmacher states that in 1606 a Hans Kerner and his son Hans Kerner the younger were recorded as working at that trade.

In 1890 Emil Kerner (1863-1940) started the firm Gewehrfabrik Kerner & Sohn at Trübenbachstraße 3 in Suhl. Later he relocated to Judithstraße 57. Emil had two sons – Ernst and Franz who followed him in the gun making trade. The Trade Mark “EK” was registered by Emil Kerner in 1903.  The “Sohn” (son) referred to in the Company name was Franz.

According to Hans-Jürgen Fritze Archival documents in Suhl show that in 1914 Ernst was registered or recorded as a büchsenmacher or gun maker on his own and the addition of “Co.” to his firms name was to give the impression that the firm was a serious one or lager than it really was.  In 1919 Ernst Kerner and Karl Funk formed a firm known as Kerner & Funk which was located at Lutterothstraße 7 in Suhl. It is believed that this partnership only lasted about 5 years. Then the business apparently returned to Ernst Kerner & Co. until 1946 when the Soviets dismantled the Company.

The Kerner’s appear to have favored getting DRGM’s to protect their designs rather than DRP’s which were full patents. Some of the DRGM’s issued to them were-

The following Emil Kerner Catalog pages are courtesy of Fredrik Fránzen in Sweden. 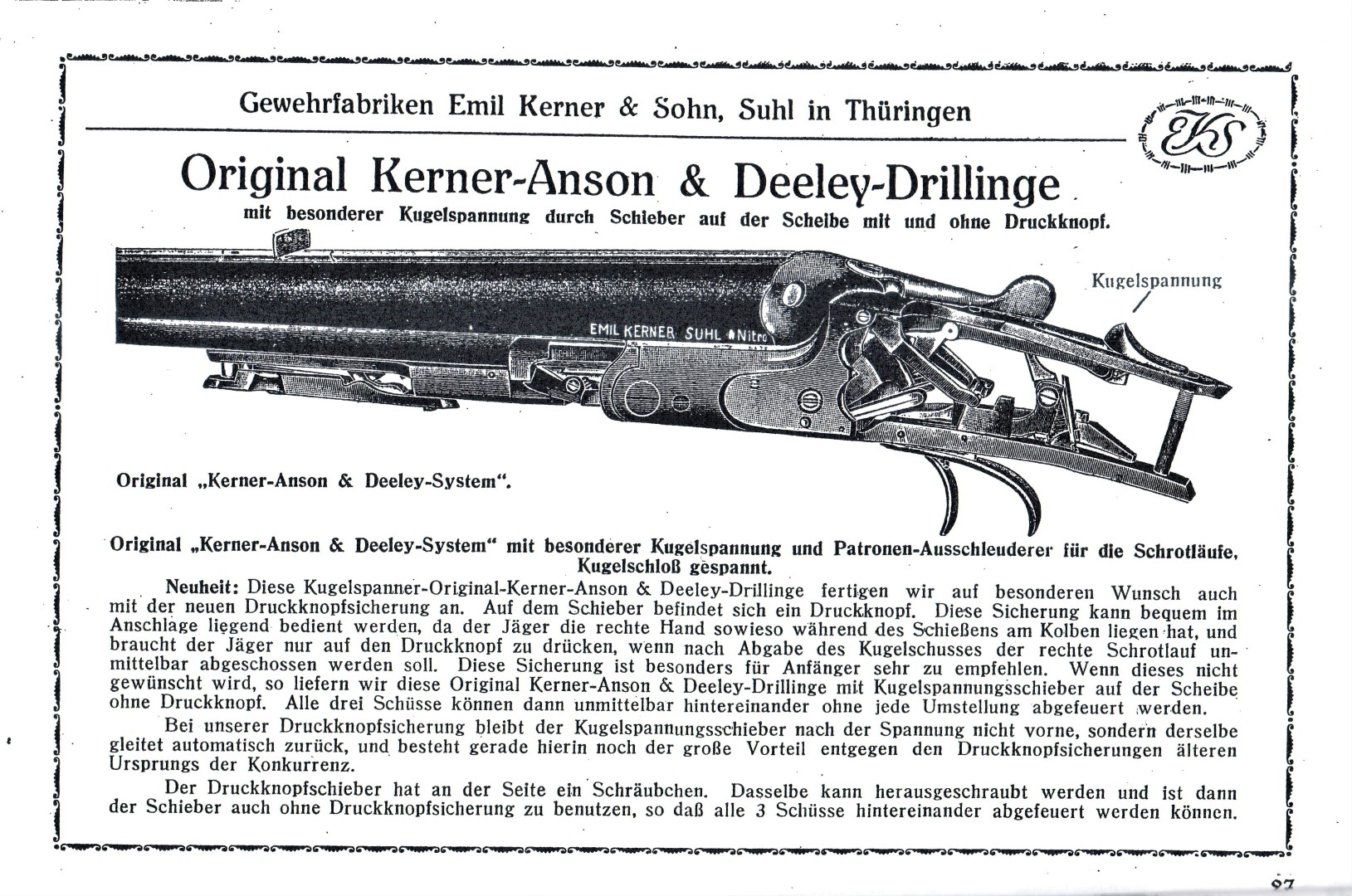 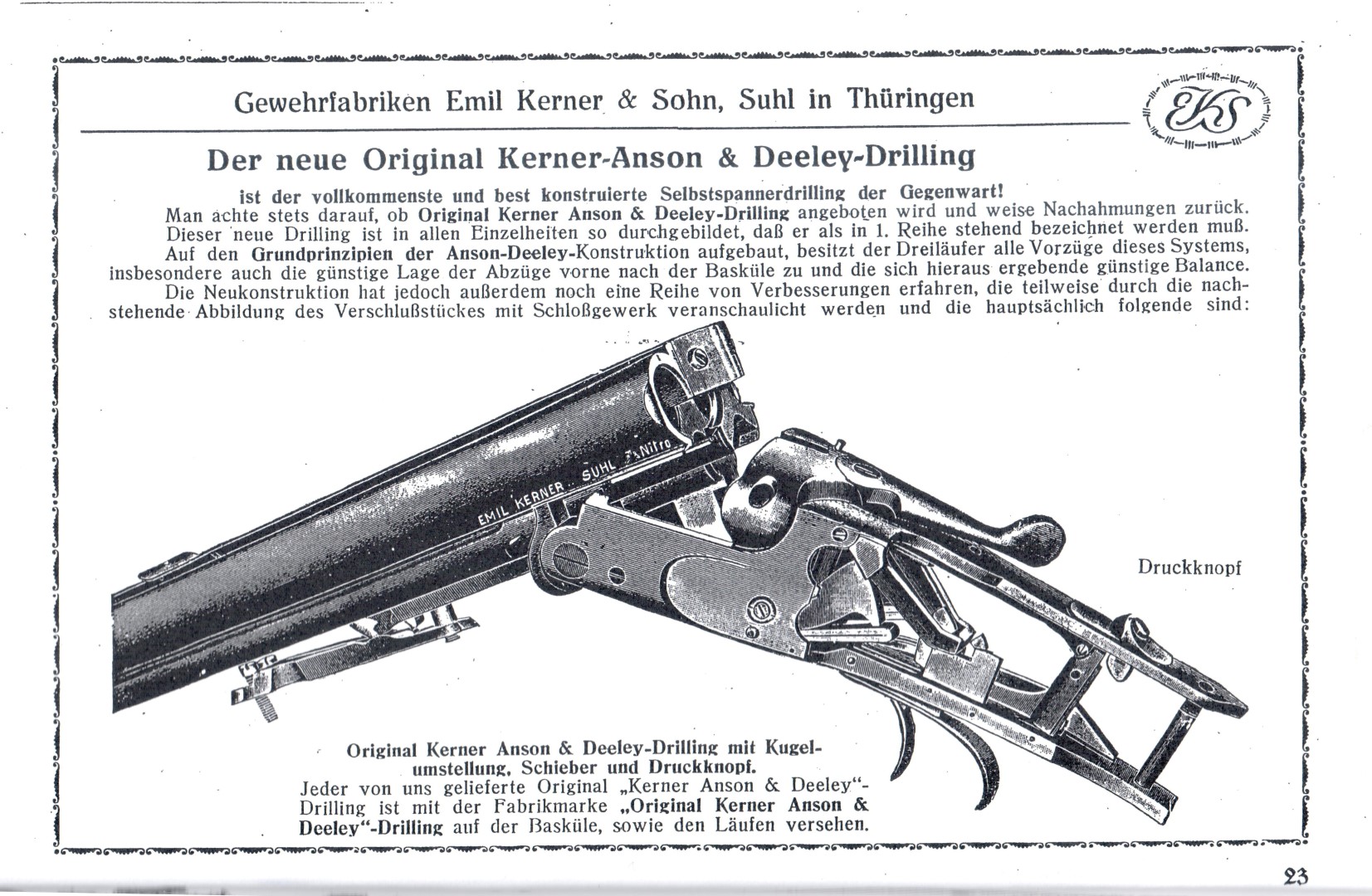 The following advertisement is from the 1907 issue of  Schuss & Waffe 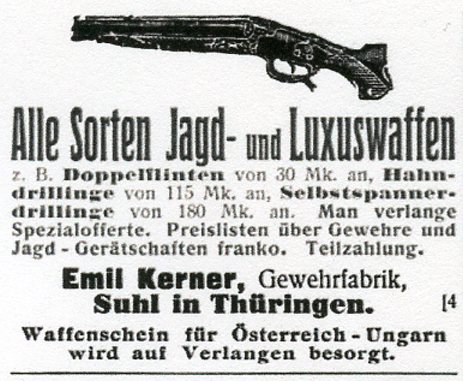 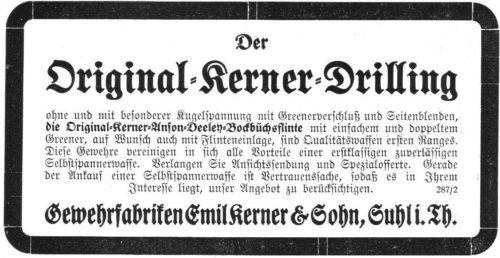 An advertisement for the Ernst Kerner & Co. showing the Auerhahn trade mark.

This is a BockDoppleBuschflint or a over-under double rifle shotgun. It is chambered for the 16 ga. shotgun, .30-30 Win. and 22 Hornet. The barrels are 23 5/8 inches long and are Krupp steel. The action is a Blitz trigger plate with a Dural (Aluminum) receiver. The condition was new and the hammer price was $6,750. 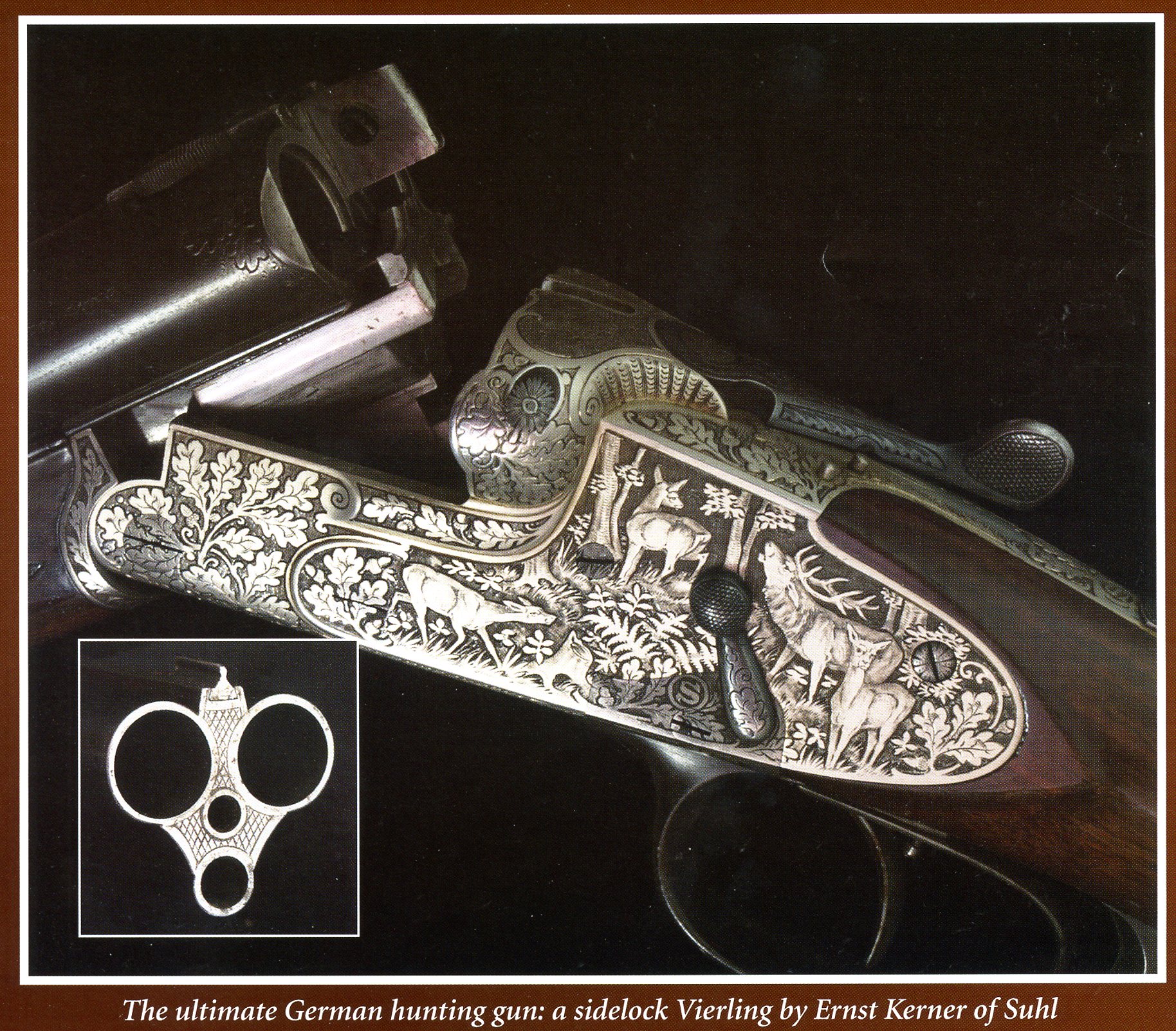 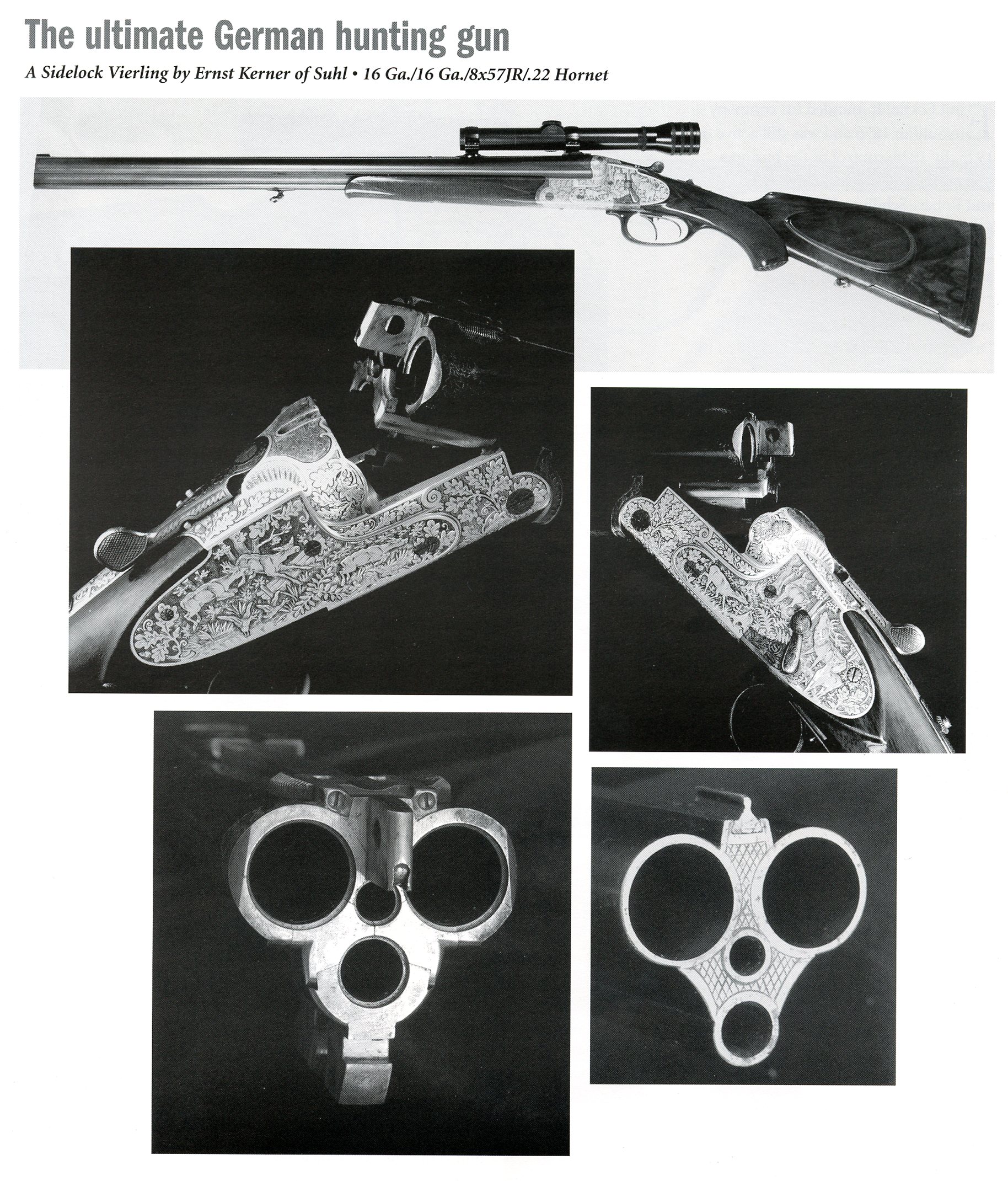 The following images are courtesy of the James D. Julia Co. 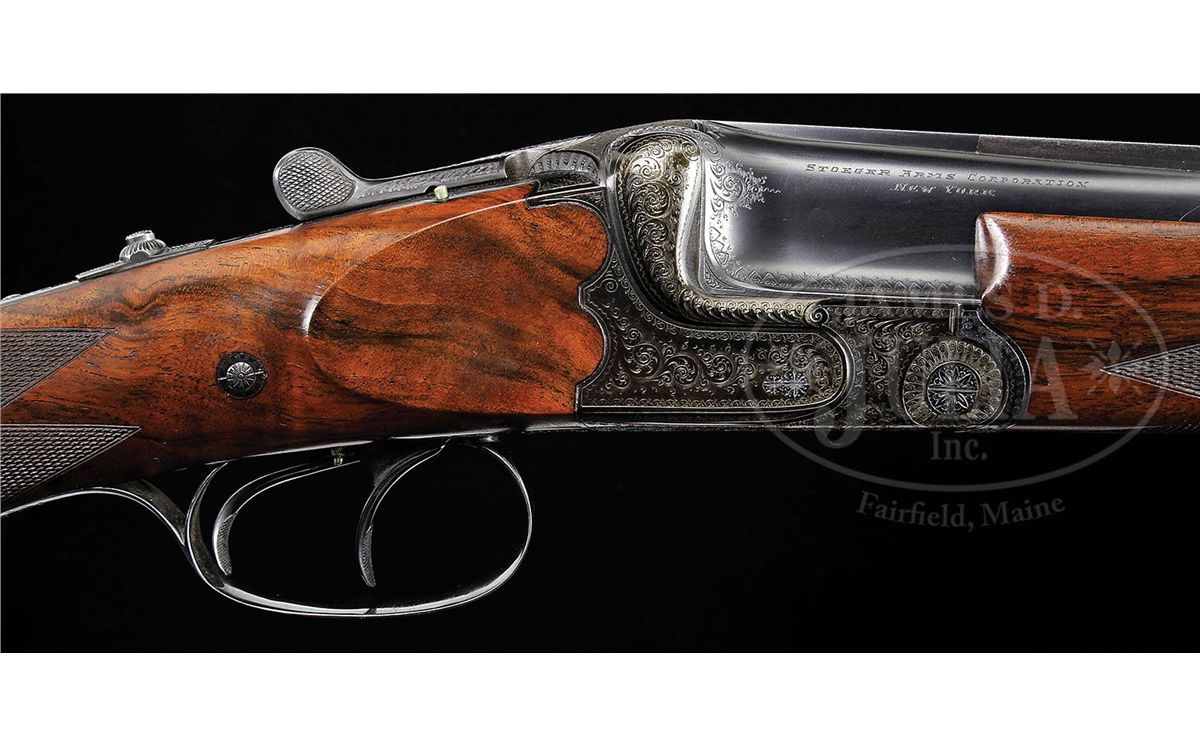 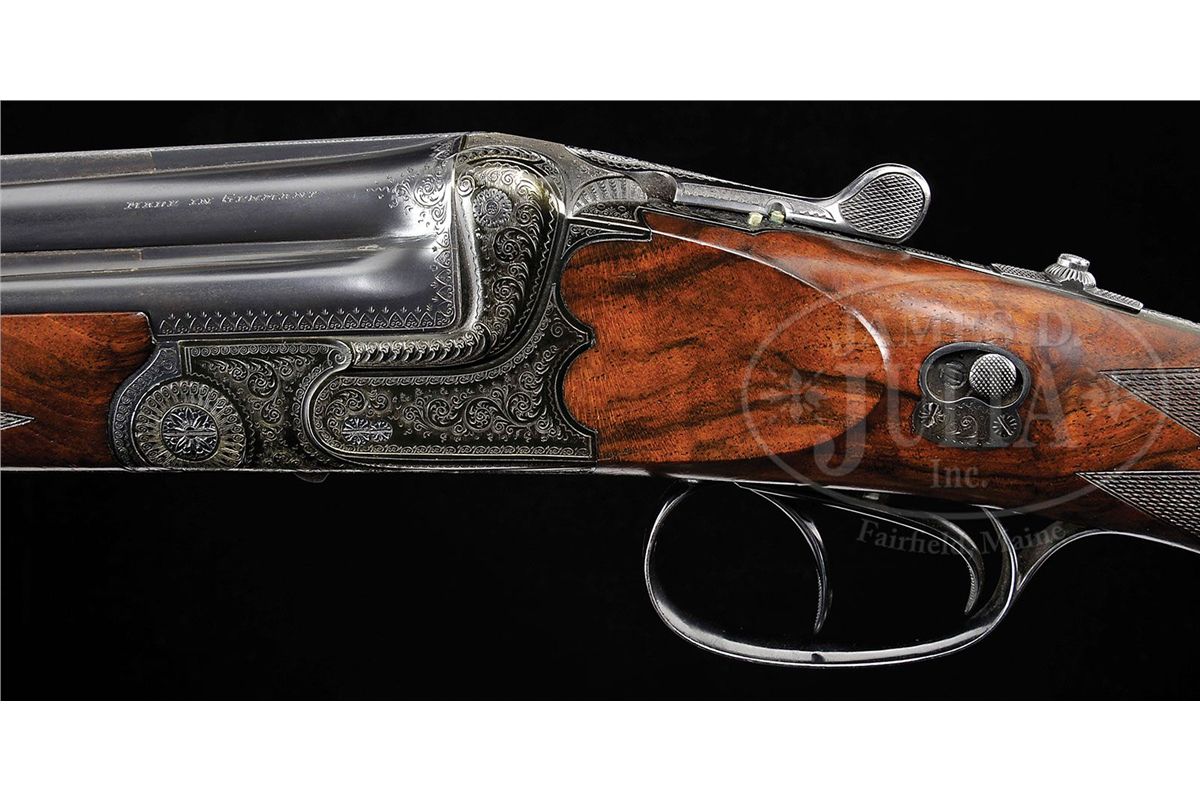 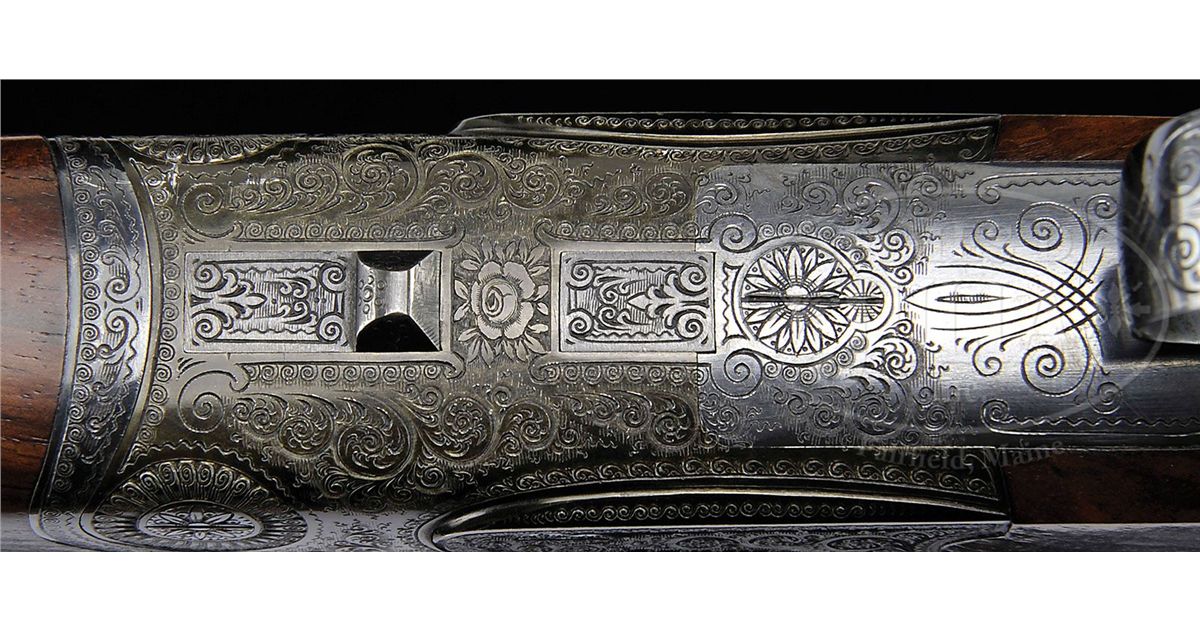