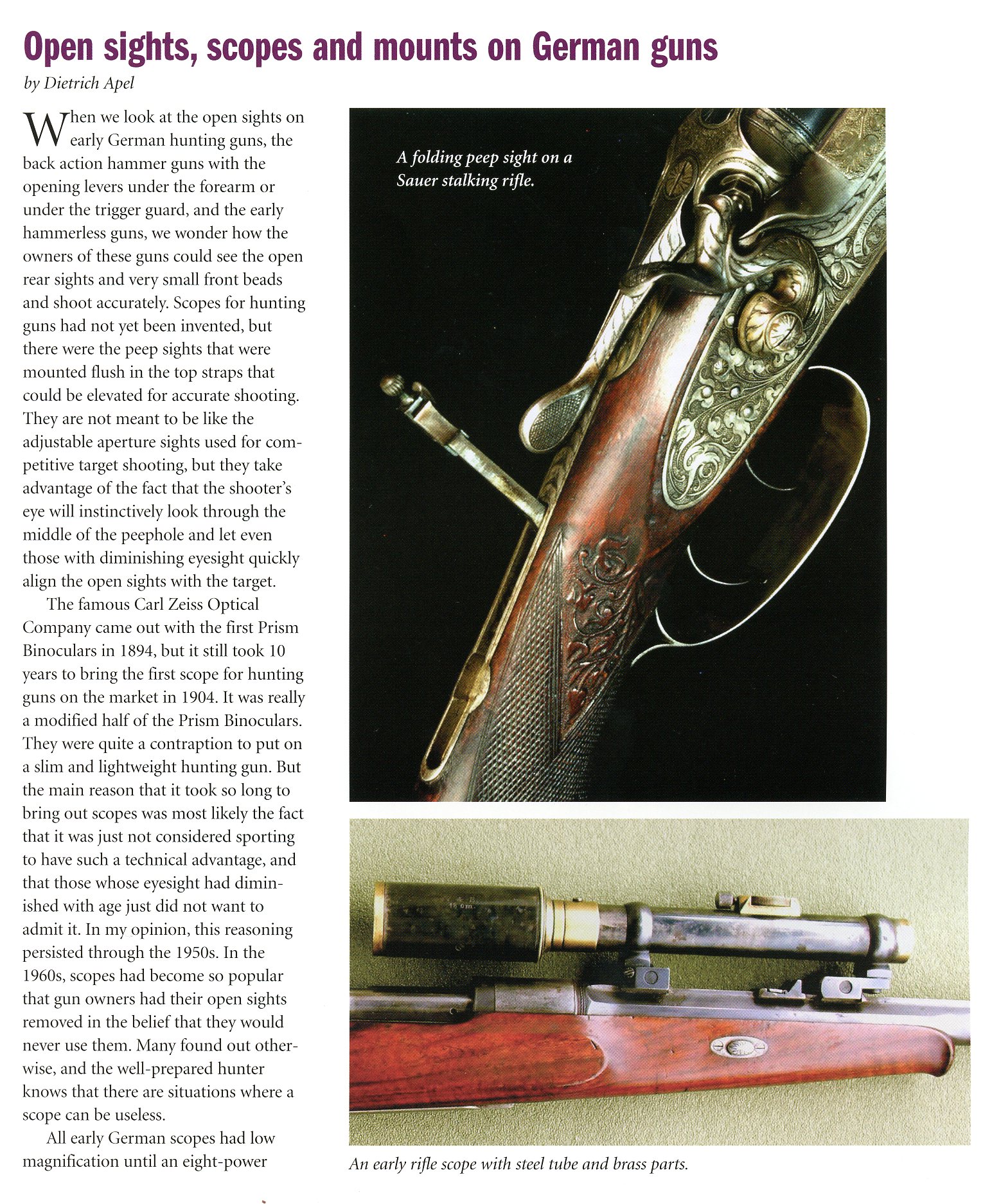 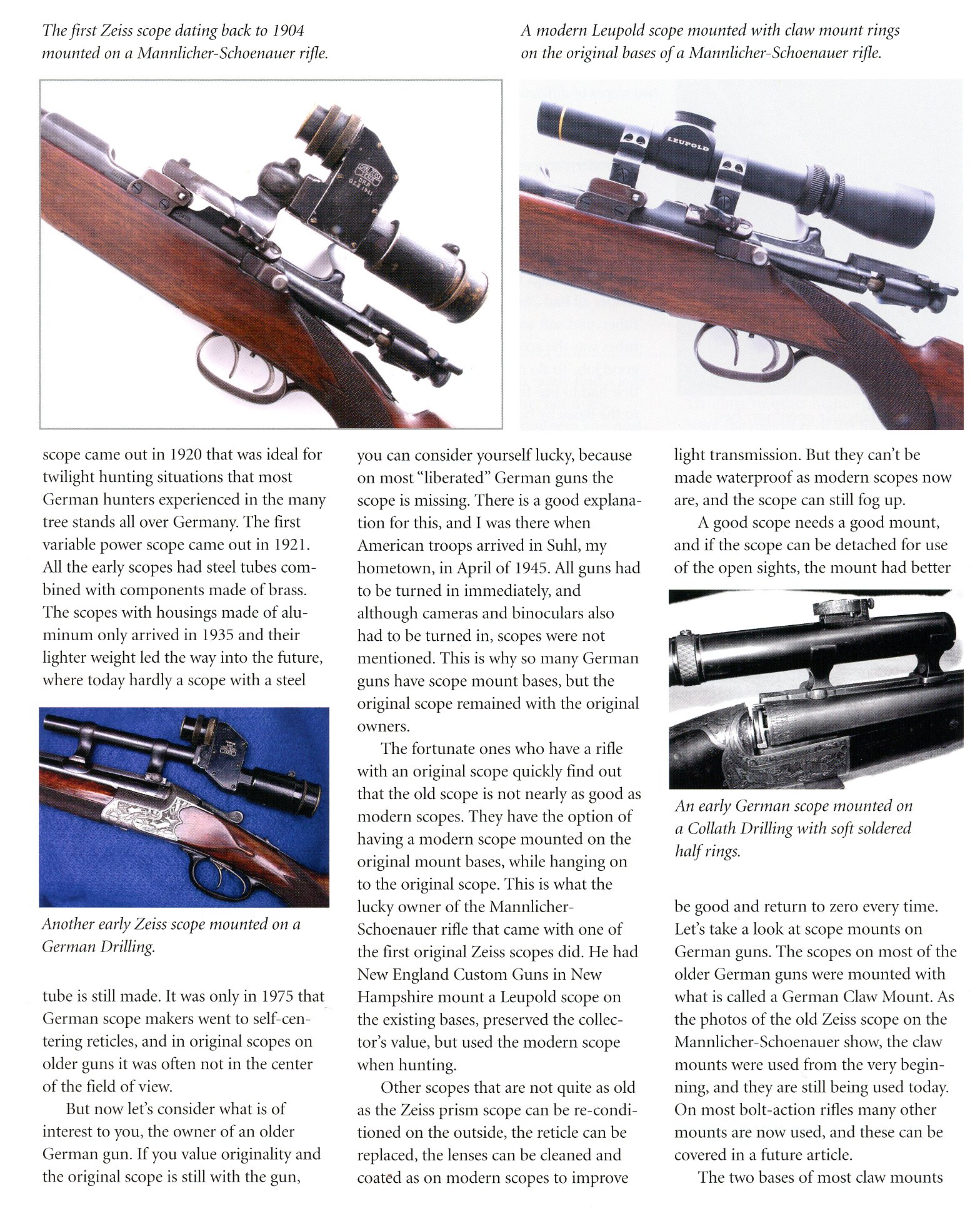 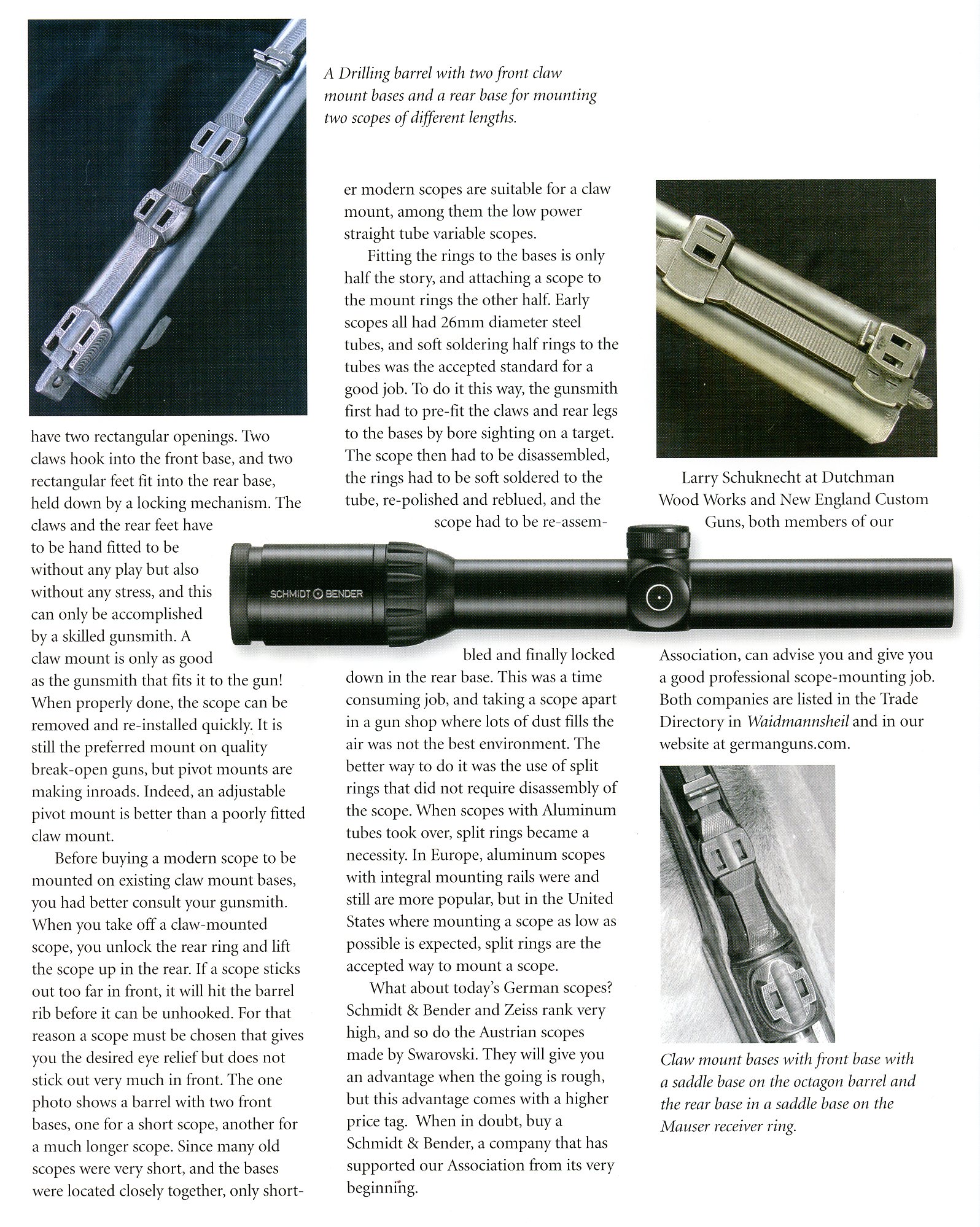 I am no authority on scopes and the following material will certainly not be complete and may contain errors. If you find one please let me know so it may be corrected. Also any new material is certainly welcome.

This page will look briefly at each major Scope maker and will be added to as information becomes available. After the entries on the scope makers will be articles found about scopes in general.

The origins of the Emil Busch A.-G. Co. of Rathenow, Germany dates back to 1792 when pastor Johann Heinrich August Duncker (1767-1843) began making optical instruments. His son Eduard took over the business in 1819. In the 1840’s they began making eye glasses. In 1872 the firm became the stock market co. Emil Busch A.-G.  In 1927 Zeiss became a major share holder. With the end of WWII the Company was destroyed. (ref.- Camerapedia Wiki) 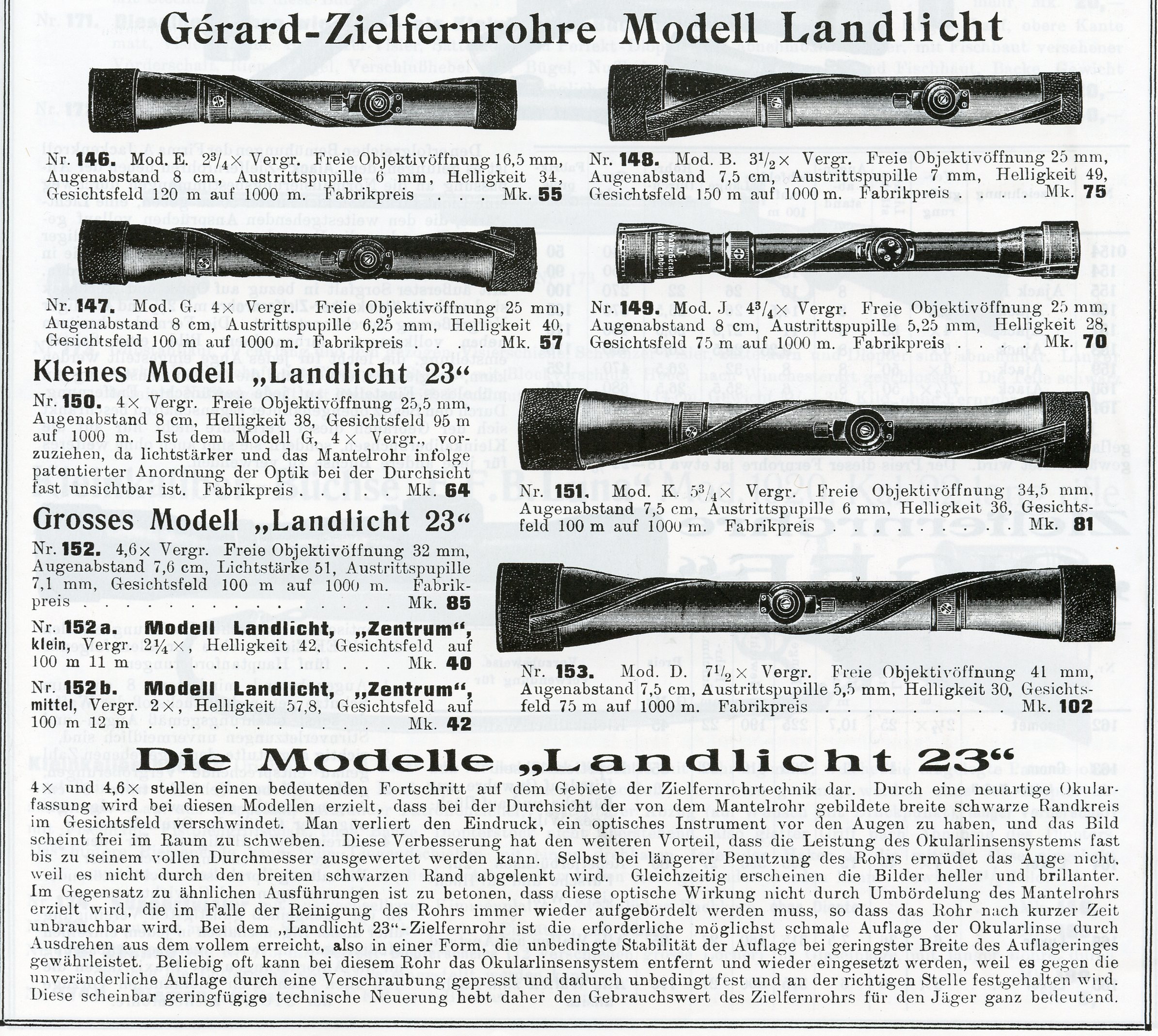 The firm of C. P. Goerz  (Carl Paul Goerz) in Berlin started in 1888 making drawing instruments for schools and quickly branched into making Cameras and Lenses. This of course led to making rifle scopes. In 1895 they started a branch in New York, N.Y. which in 1905 became C. P. Goerz American Optical Co. In 1926 the merger of Goerz with ICA, Contessa-Nettel and Ernemann became Zeiss Ikon. The following pages come from an early 20th Century Ernst Steigleder Catalog. 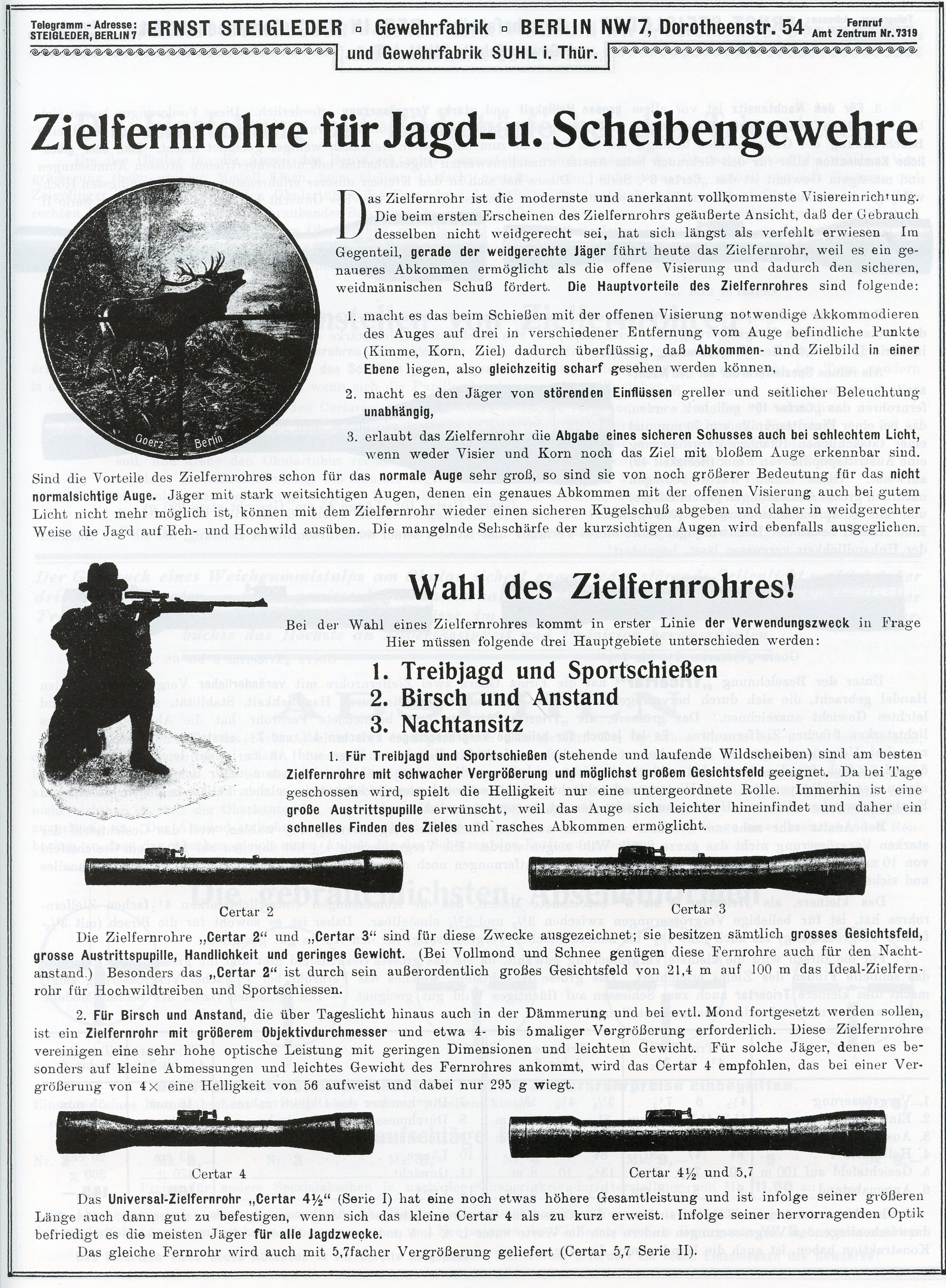 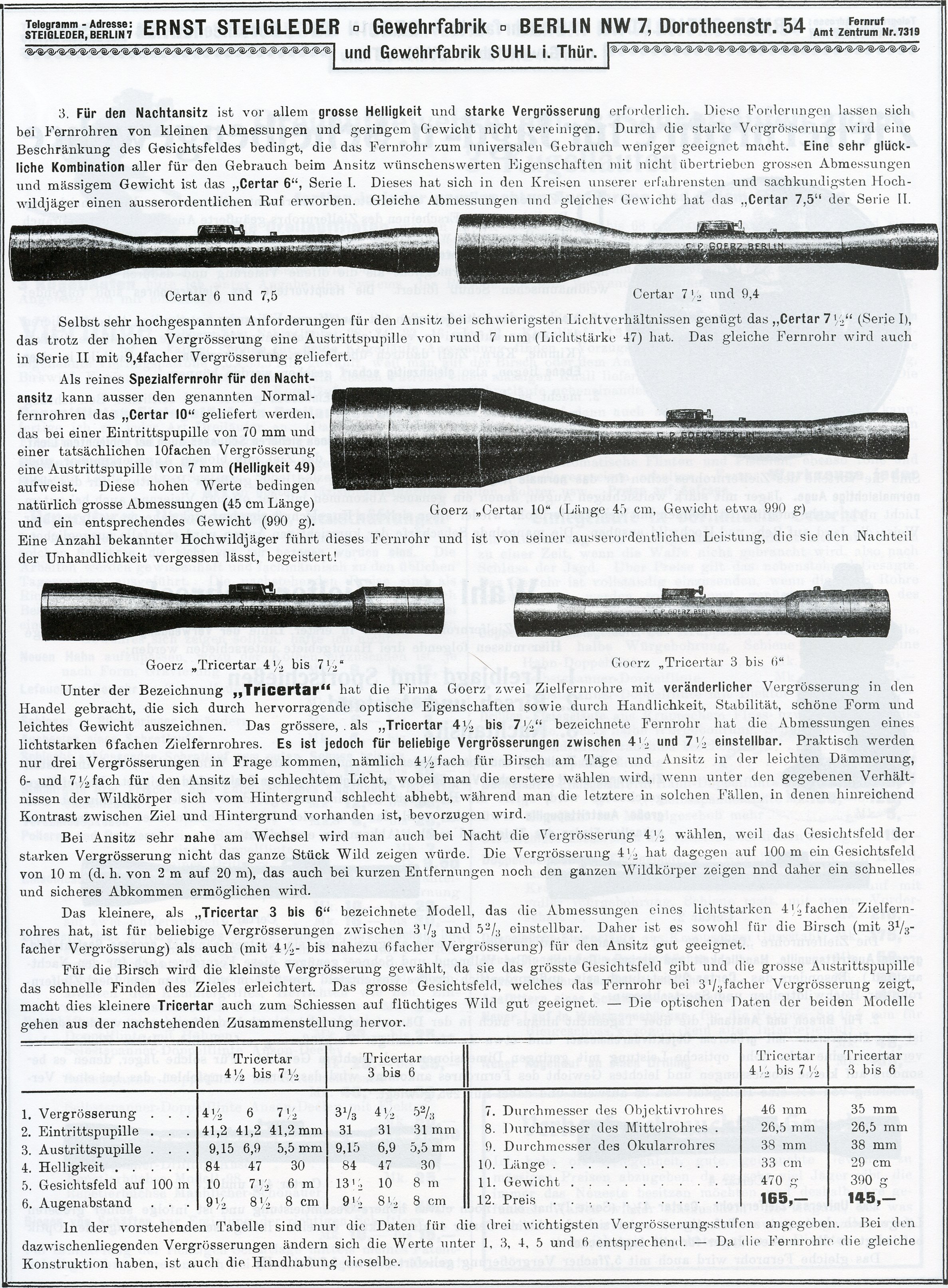 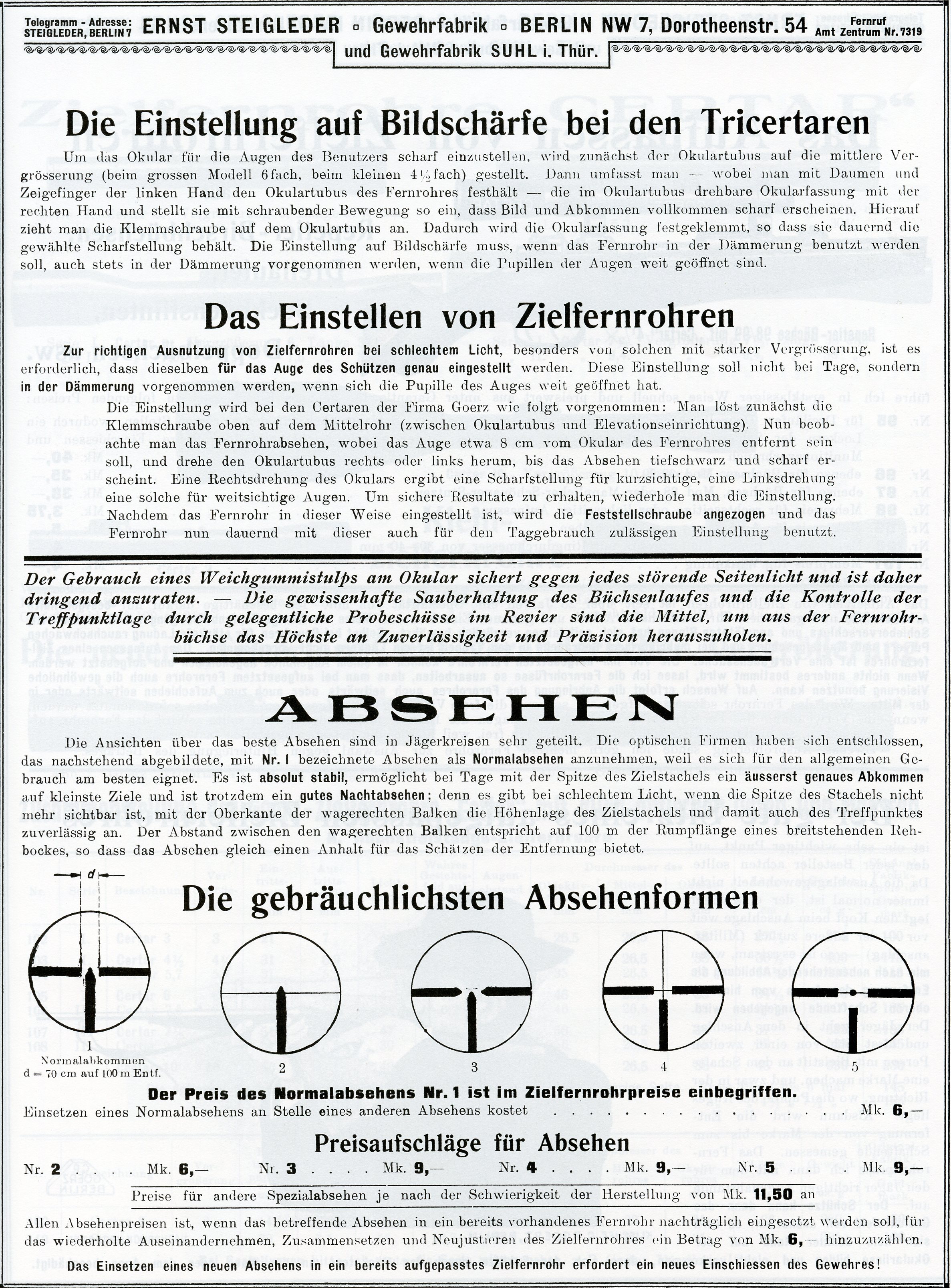 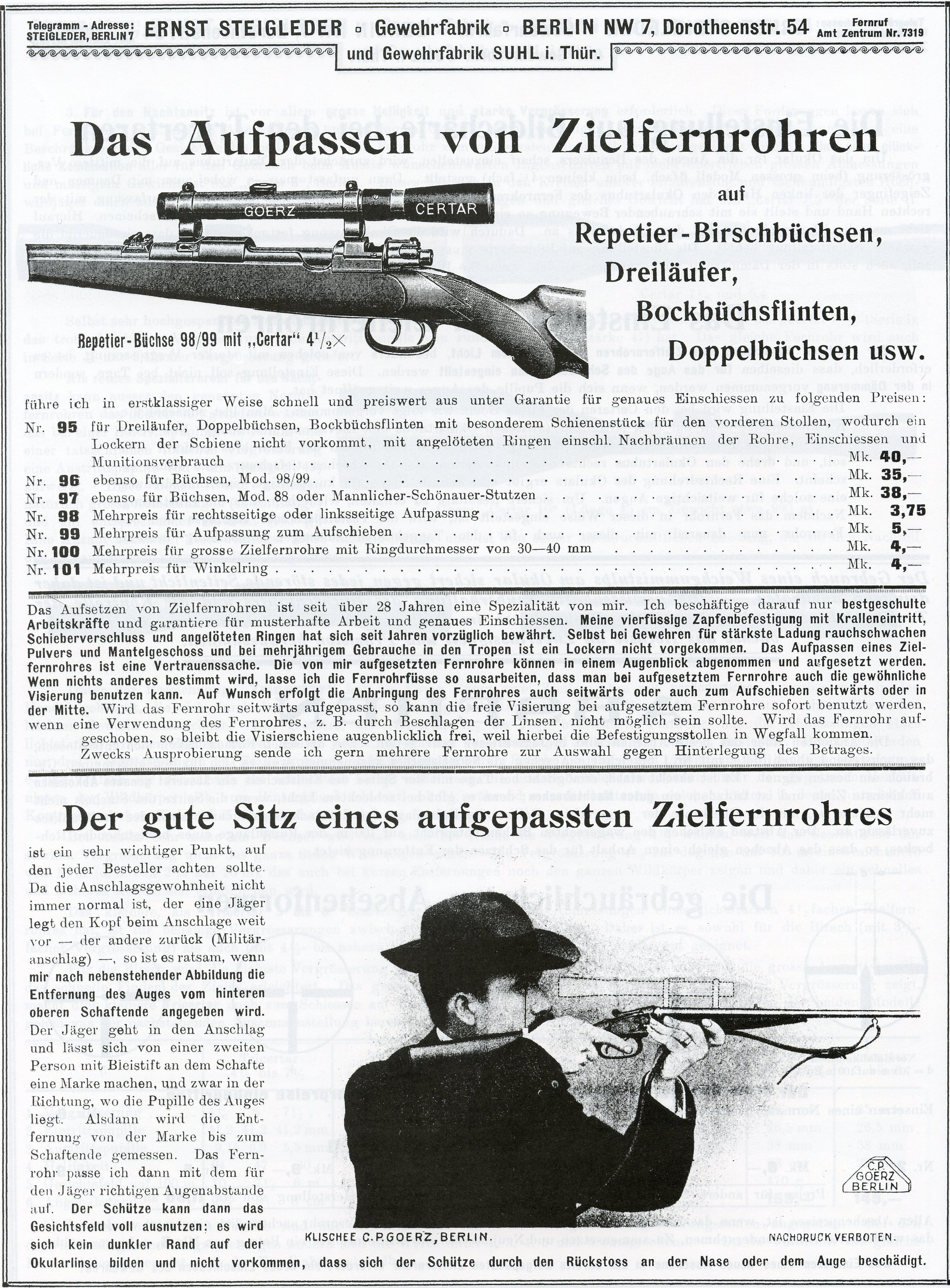 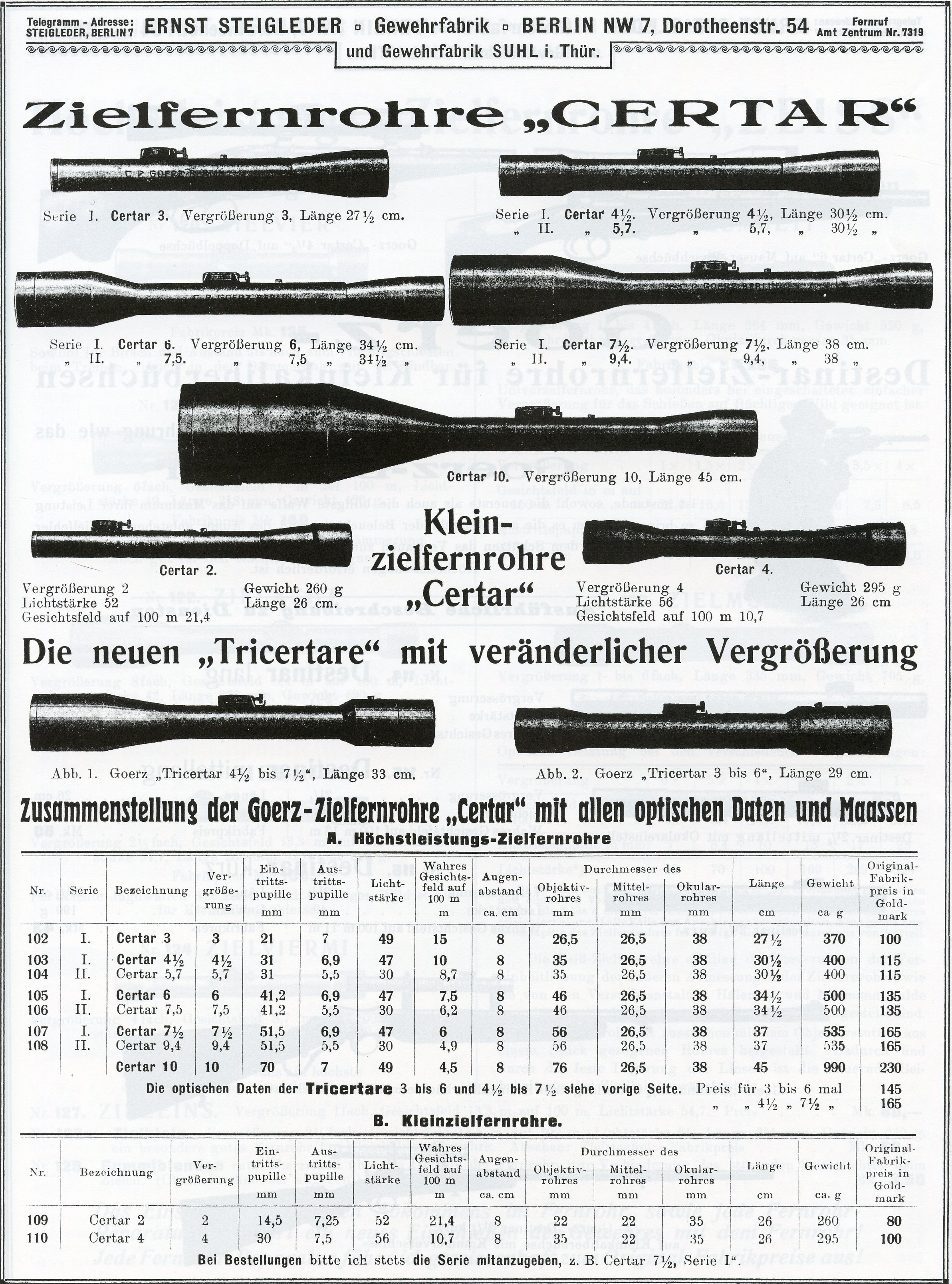 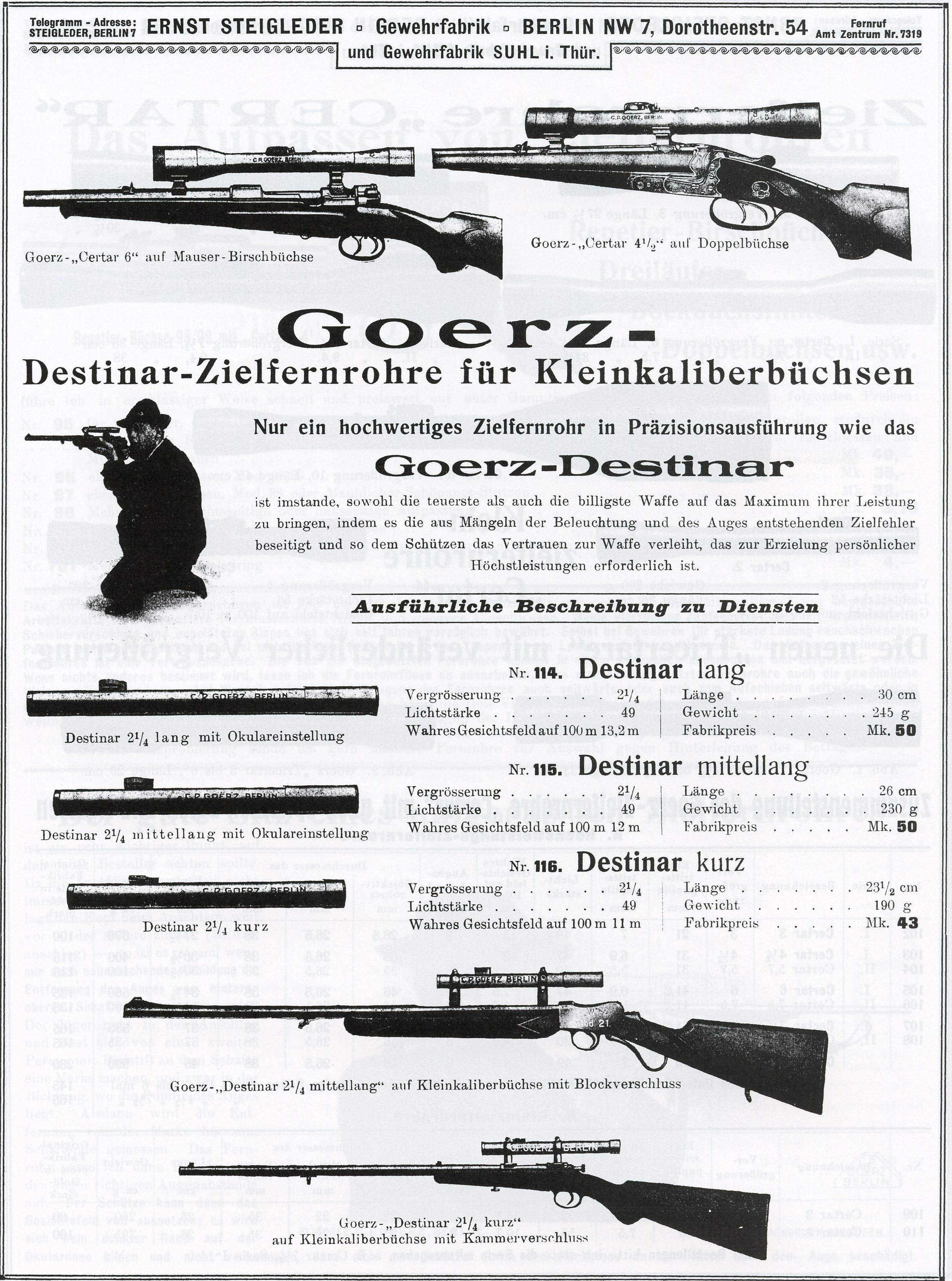 The firm of Engelbert & Hensoldt was founded in Sonneberg, Thuringia in 1852 and moved to Braunfels in 1861 and finally to Wetzler in 1865. While being a partner in this firm, Moritz Hensoldt had his own Company. The seperate Hensoldt Co. grew and in the 1880’s built a new factory on Sophienstrasse in Wetzler. In 1896 the Company became a general partnership known as M. Hensoldt & Söhne. In 1908 the firm built a new larger factory on Gloëlstrasse. In 1922 the the firm became a stock company. In 1928 the Company was in financial crisis and the Carl Zeiss Foundation became the majority shareholder. (ref.- www.zeiss.com) 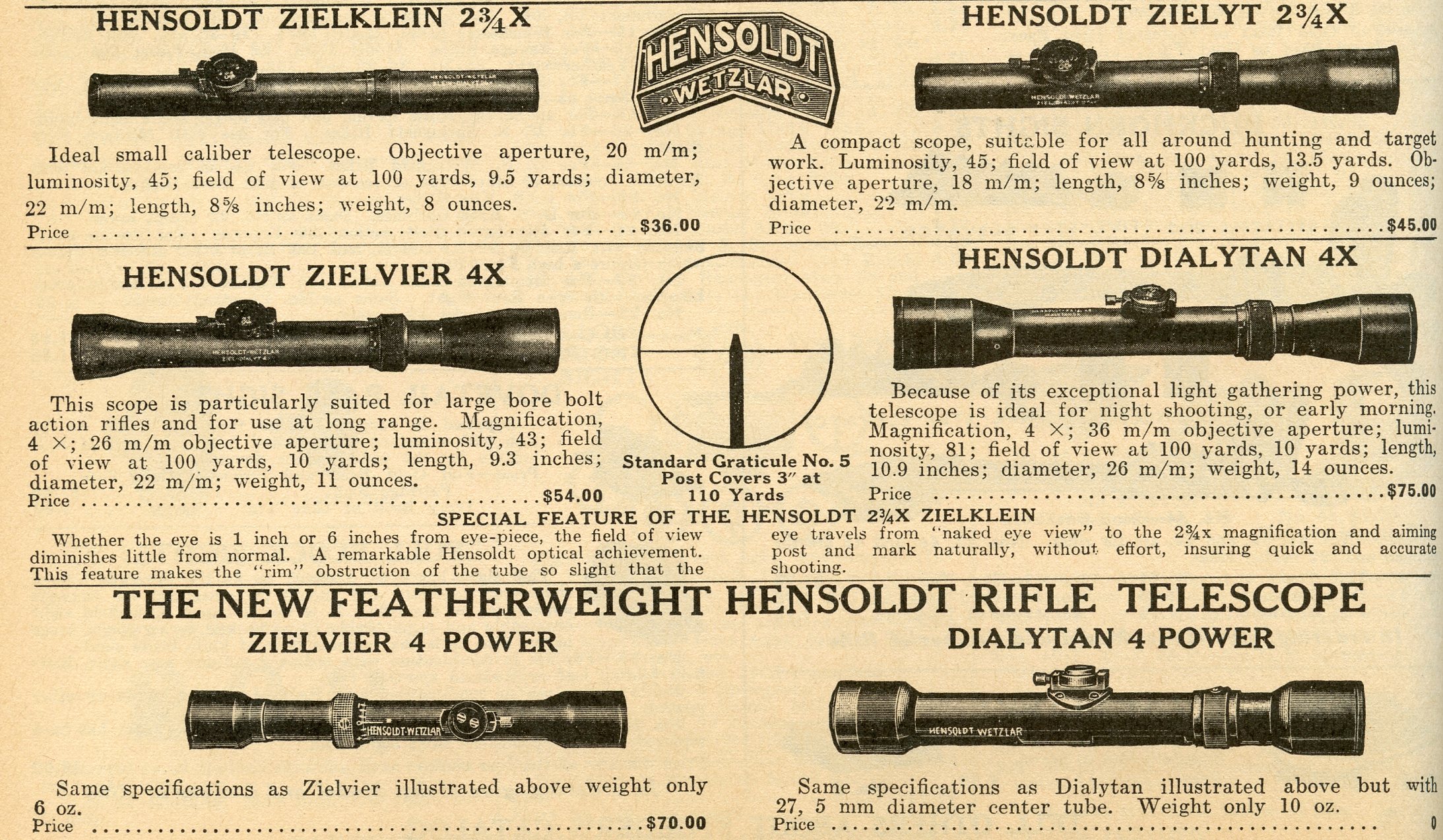 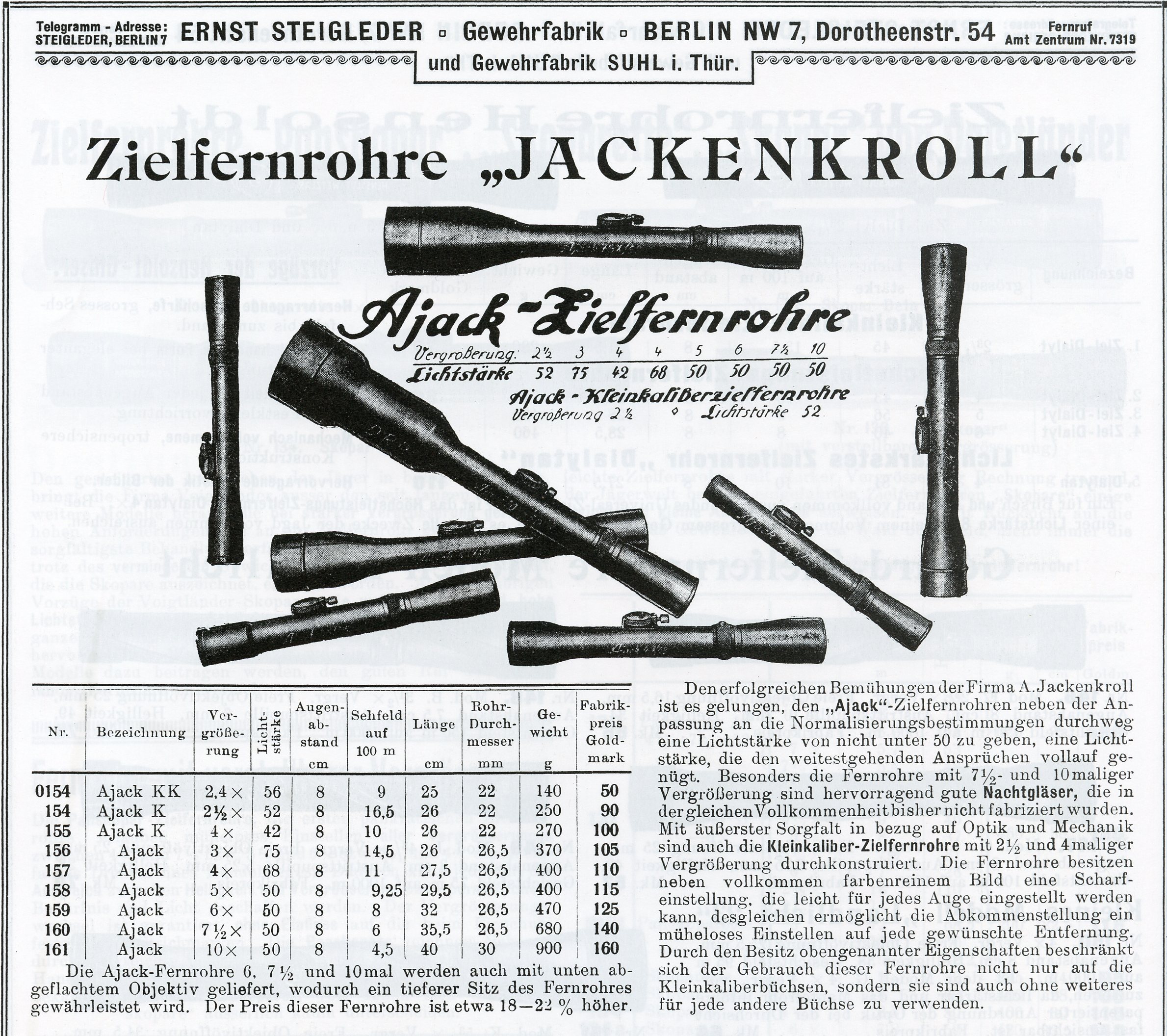 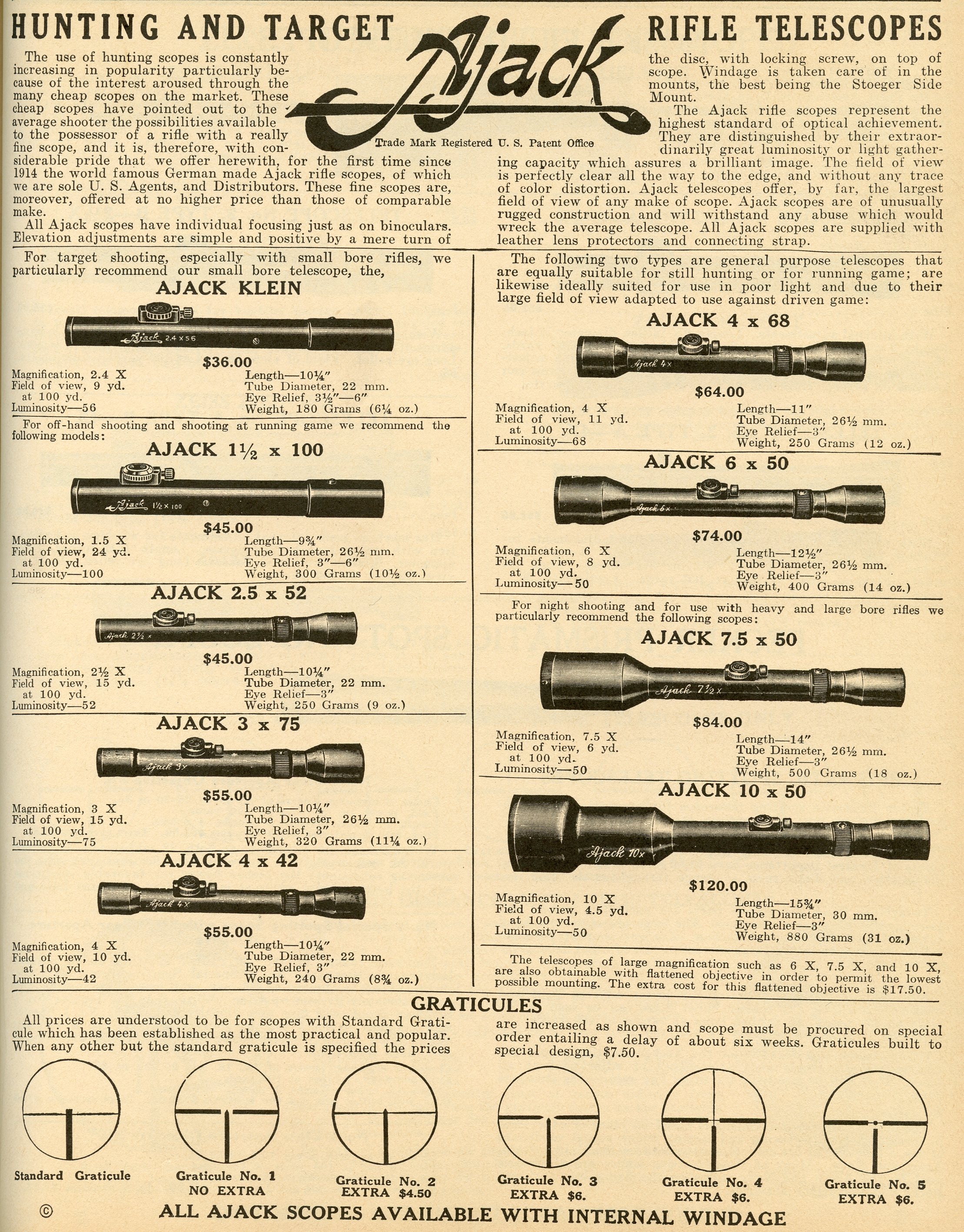 In the mid 1750’s Johann Christoph Voigtländer (Nov. 19, 1732- June 27, 1797) began working in the mathematical instrument shop of Meinicke in Vienna. He drew attention for his skill and achievements and was recognized by the Minister of State of the Habsburg Monarchy- Prince Wenzel von Kaunitz. In 1763 Johann founded his own shop and the Empress Maria Theresa granted Johann a “Protection Decree” or Schutzdekret which allowed him to sell his products with protection from rivals. Johann was a prolific and successful inventor developing optical devices, machinery and other small instruments.

In 1797 Johann and the Voigtländer firm received a Landesfabriksbefugnis  or “National commercial license” which allowed him to use the Habsburg imperial eagle on their goods and advertising and also allowed them to open branch sales offices anywhere in the empire. This was also the year that Johann passed away but the firm was on a solid footing and the business was carried on by his widow and their four children.

Around 1840 Johann’s grandson Peter Wilhelm Friedrich Ritter von Voigtländer (Nov. 17, 1812- April 7, 1878) took over the reigns of the firm and like his granfather was very inventive and pioneered many new developments in Optics, Cameras and photography. In 1845 he married the daughter of a well known Lawyer from Braunschweig, Germany where he had a branch sales office. During the Austrian Revolution of 1848 he became embroiled in the affairs and fled Vienna and moved to his wife’s home city of Braunschweig where the firm grew and prospered. The Vienna branch was closed in 1868. In 1898 the firm went public and became Voigtländer & Sohn AG. In 1923- 99.7 percent of the shares in the company were acquired by Schering AG. Schering sold it’s shares in the company to the Carl Zeiss Foundation in 1956. (ref.- for more details about the company and it’s products and history go to Voigtländer- Wikipedia) 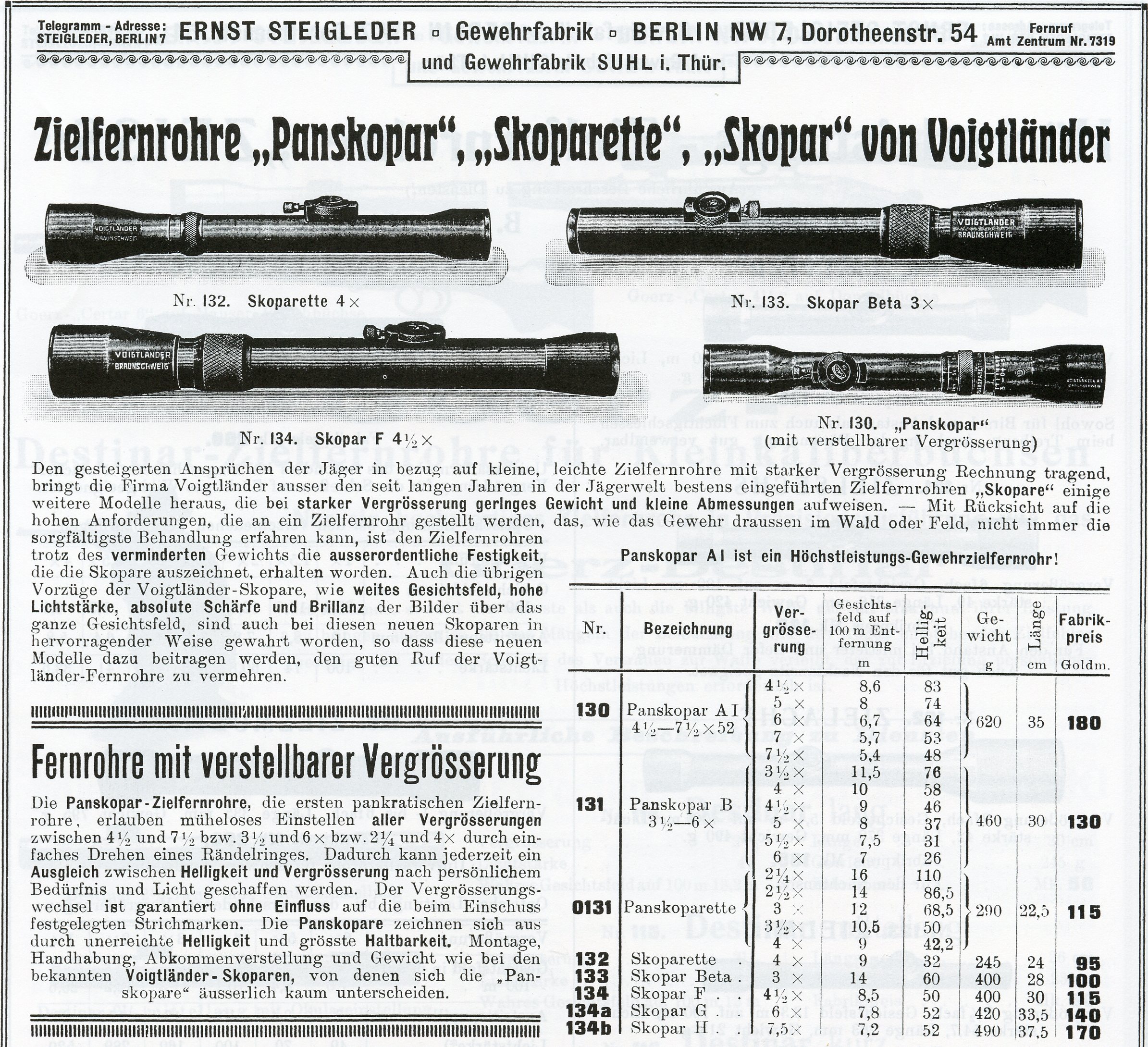 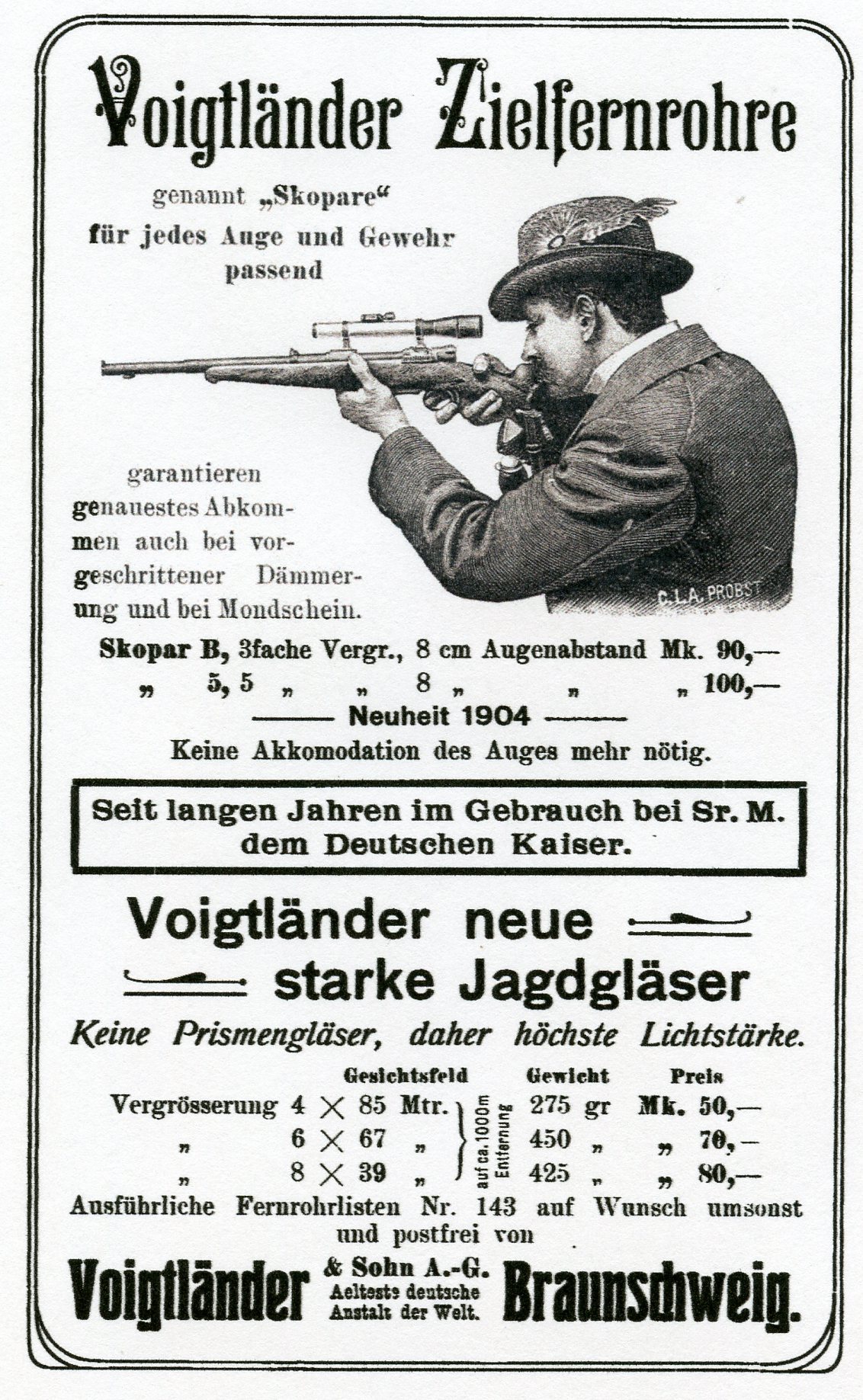 Carl Friedrich Zeiss (Sept. 11, 1816- Dec. 3, 1888) was born in Weimer. He apprenticed in the shop of Dr. Friedrich Körner where he learned the trade of making Microscopes and scientific instruments. At the University of Jena Carl studied mathematics, physics, anthropology and optics.

On Nov. 10, 1846 Carl received permission from the Weimer authorities to open his own workshop which he did at Neugasse strasse 7 in Jena. His main products were microscopes, measuring, optical and mechanical instruments. In Sept. 1847 Carl moved to a larger building at Wagnergasse 32 and took on his first apprentice. In 1857 he introduced the first compound microscope. The company employed around 200 employees by 1864 which required a move to an even larger facility at Johannisplatz 10.

In 1866 Zeiss hired 26 year old Ernst Abbe (Jan. 23, 1840- Jan. 14, 1905) who was a lecturer on physics and mathamatics at the University of Jena to work as a free lance researcher. It was the start of a fruitful relationship between Carl Zeiss and Abbe. Abbe became the director of Research at Zeiss. In 1879 Otto Schott (Dec. 17, 1851- Aug. 27, 1935) contacted Ernst Abbe that he had developed a new kind of glass made with the addition of Lithium. Otto was encouraged to develop new types of optical glass.

Carl Zeiss’s son Roderich became a co partner with his father in 1881.  In 1884 Carl and Roderich Zeiss, Ernst Abbe and Otto Schott founded the Glastechnisches Laboratorium Schott & Genossen where they developed new optical and heat resistant glass. In 1889 the Carl Zeiss Stiftung or Carl Zeiss Foundation was set up and by 1891 Roderich Zeiss and Ernst Abbe had tranferred all of their shares in the Zeiss firm to the foundation ensuring that the business would always operate in a socially acceptable and beneficial manner. 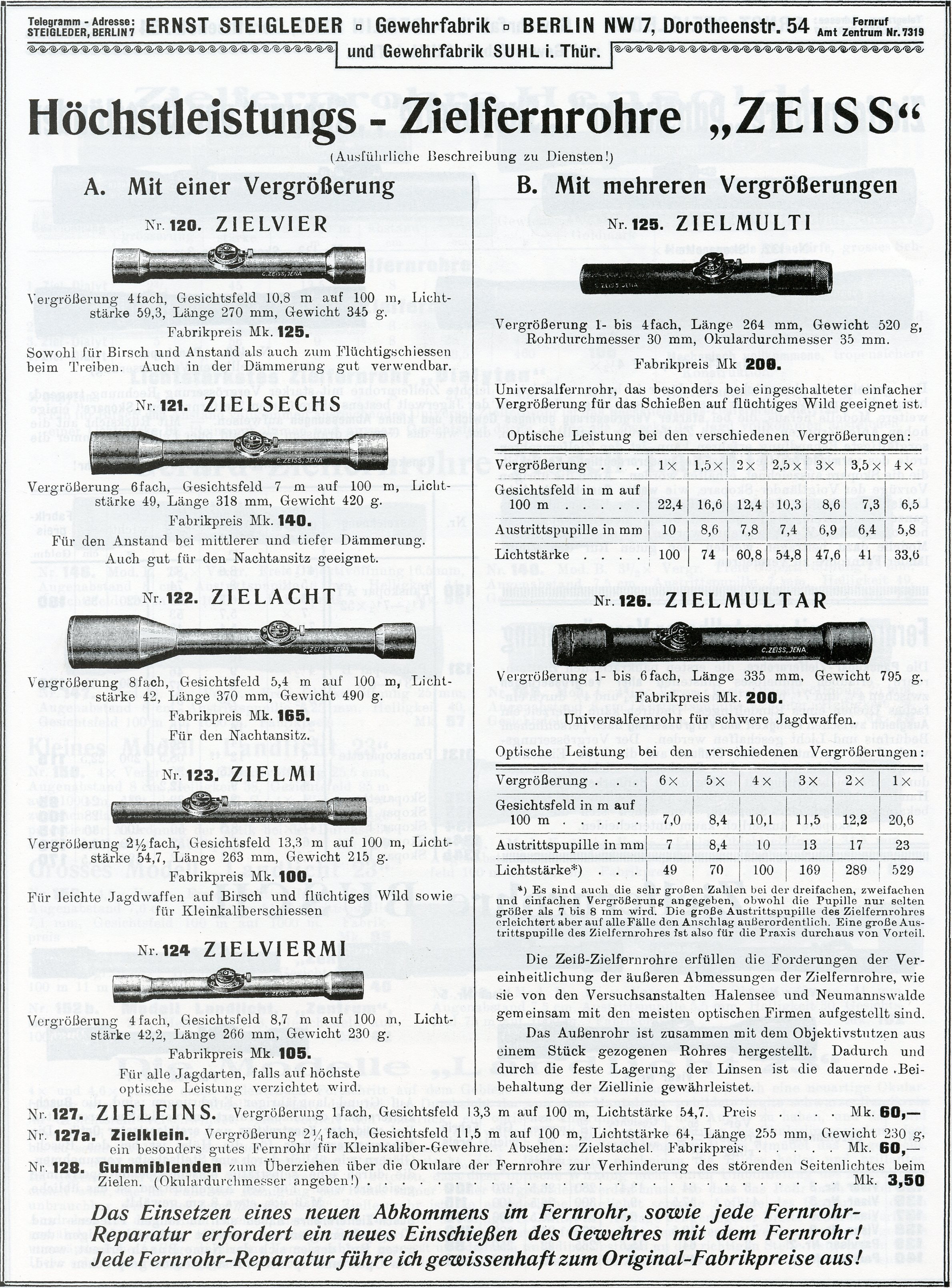 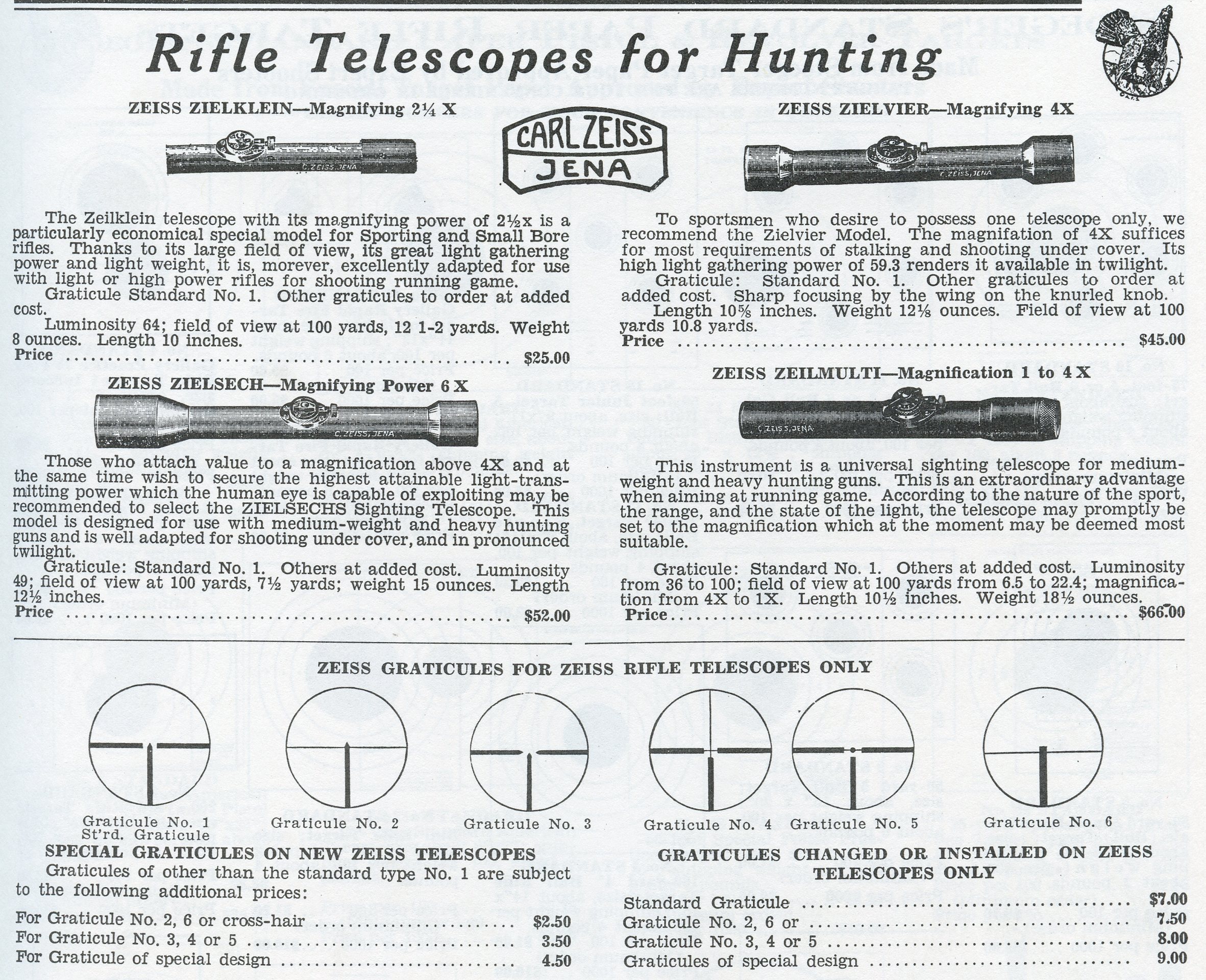 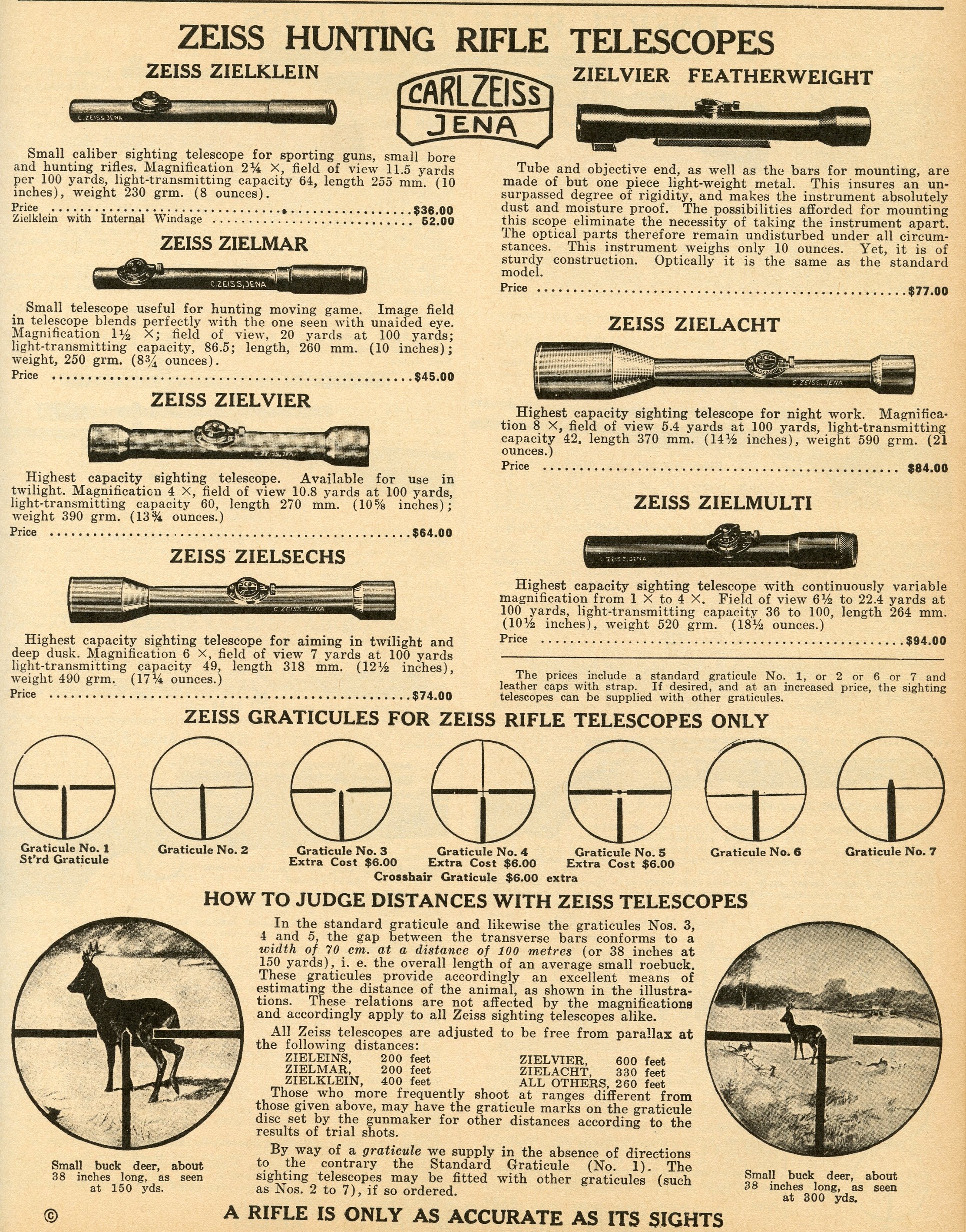 Following is a chapter from the 1914 book Schule der Optik by Dr. Alexander Gleichen and Erich Klein 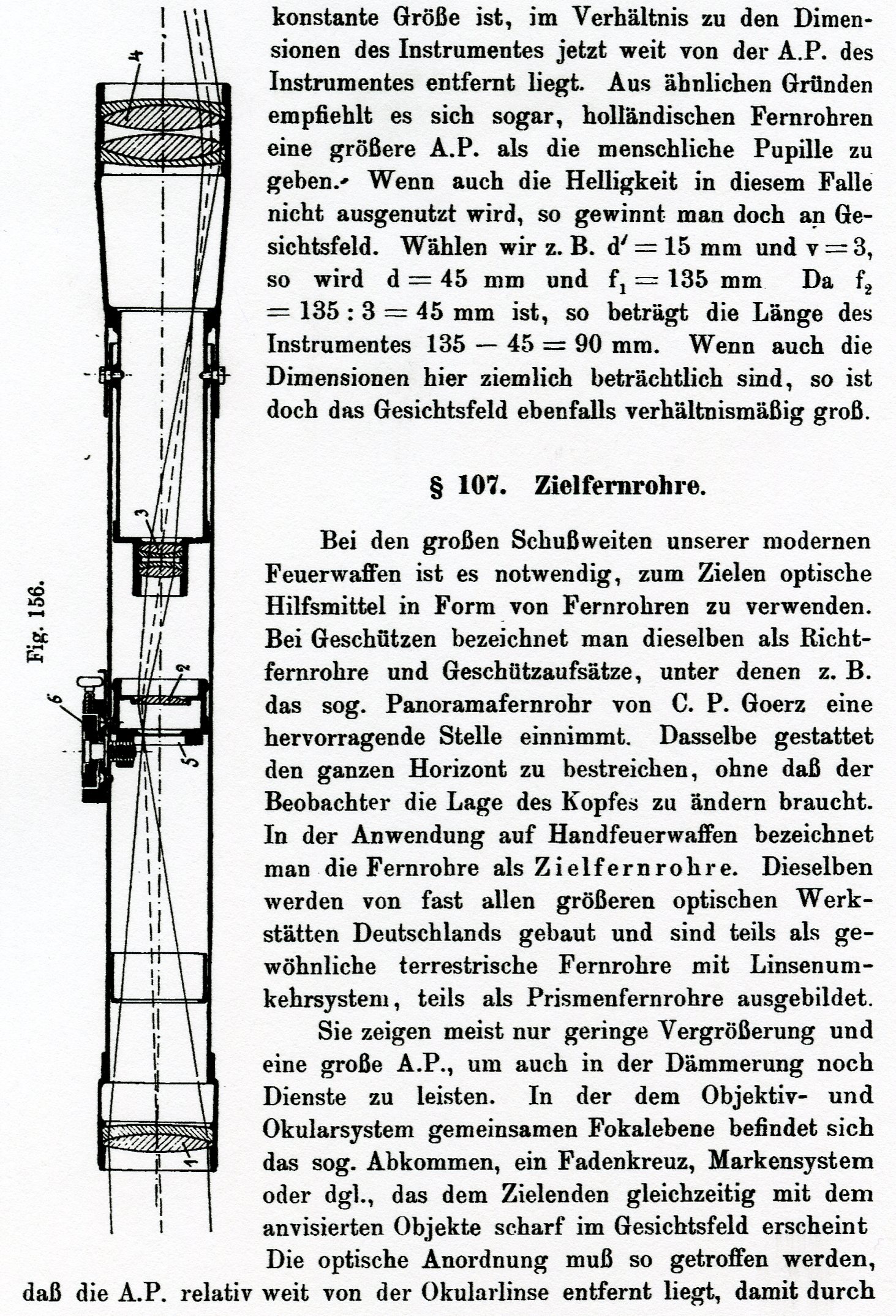 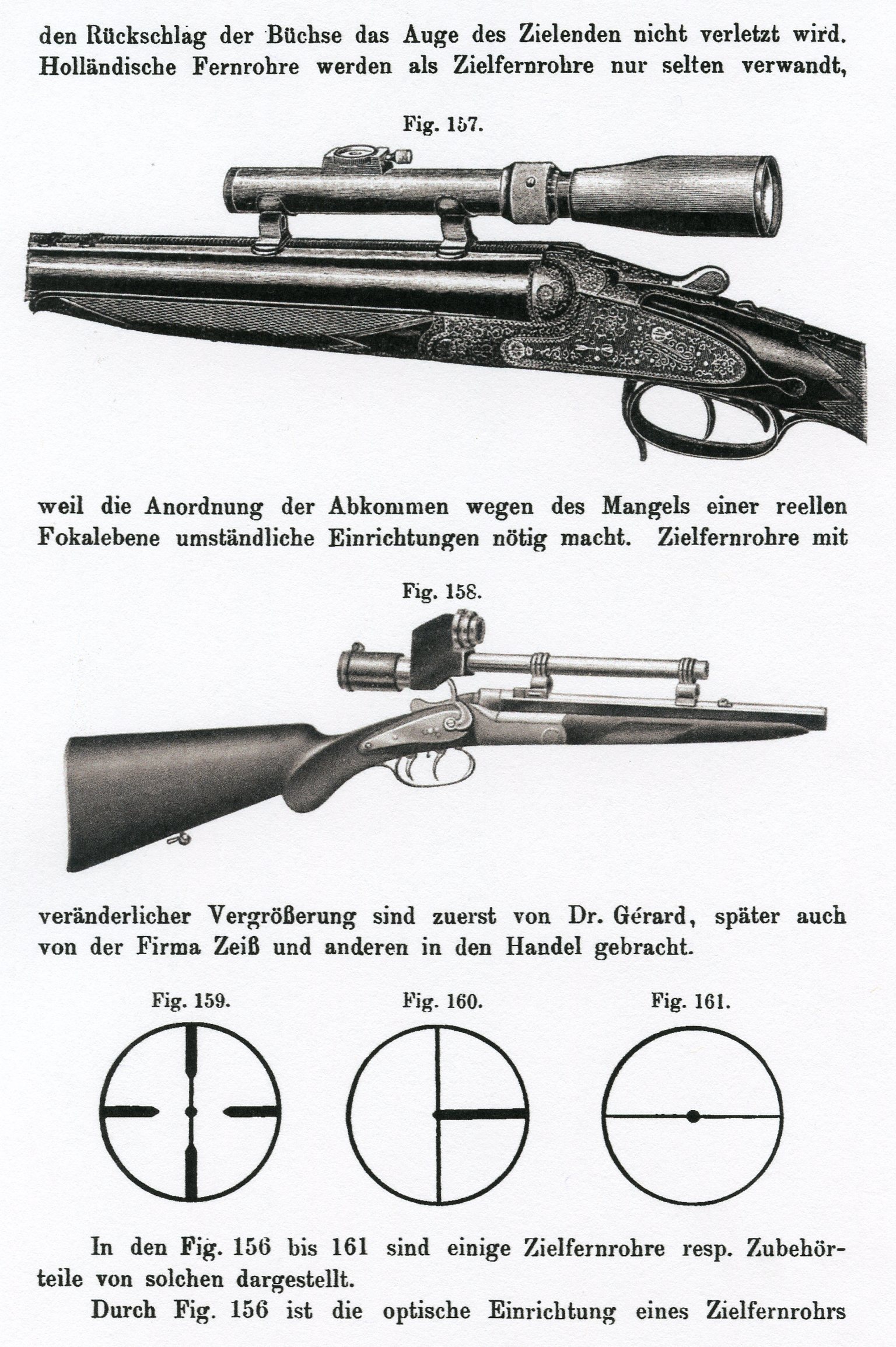 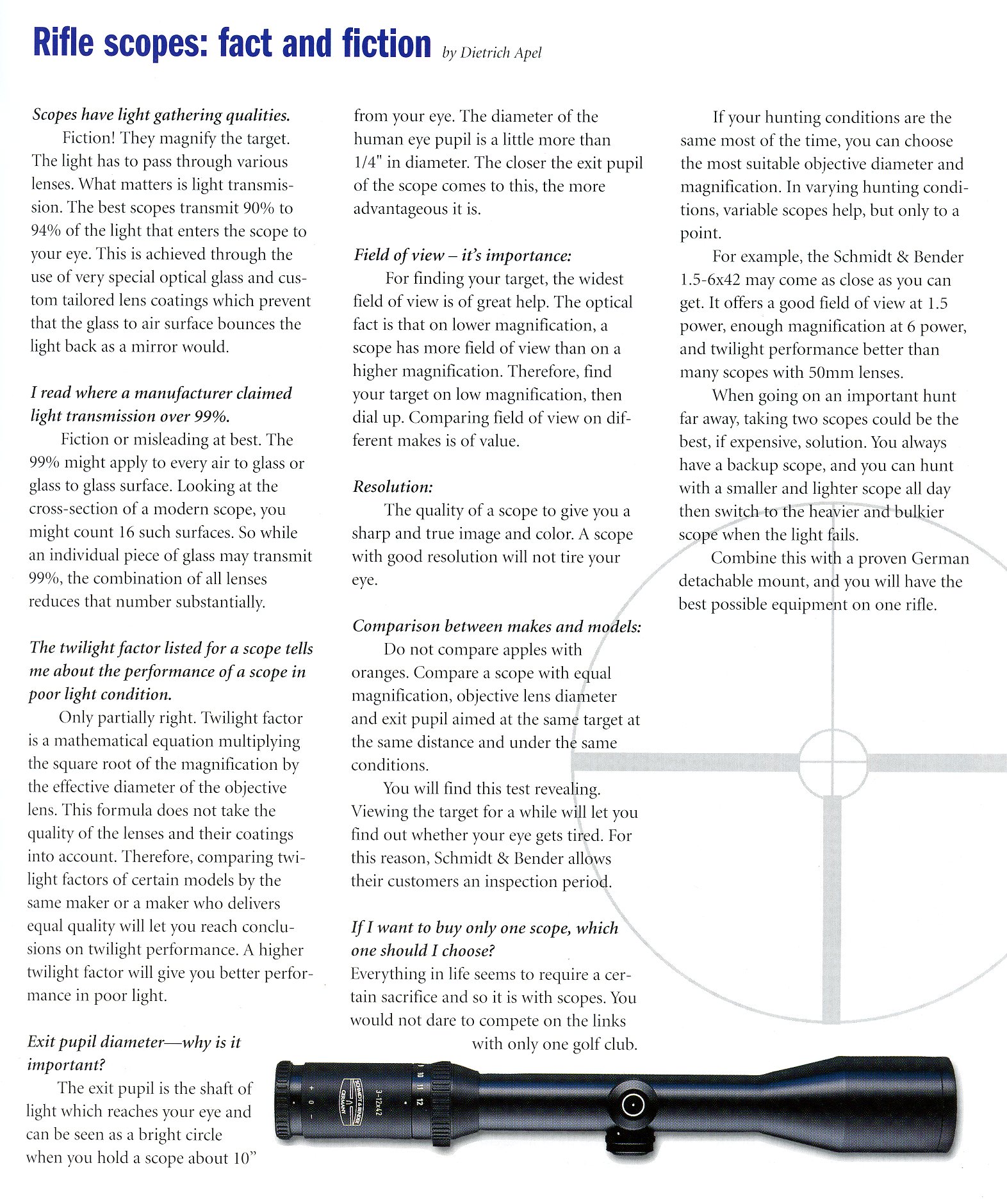