Compiled by Larry B. Schuknecht

The following information was gleaned from the two volume set of books- Der Neue Støckel by Eugène Heer, 1978.

The founder of the Contriner family of gun makers in Vienna was Johann who was born in Assling in Tyrol and first appears as a gun maker in Vienna in 1816. He was the father of Joseph and Johann Baptist Contriner and apparently passed away in 1827. About that time he was listed as a Bürger and private Gun maker. It is speculated by Heer that guns marked J. Contriner should be ascribed to Johann.

Joseph Contriner was born in Assling in the Tyrol and began his apprenticeship in Vienna in 1798. In 1810 he became a Member in the Gun Makers Guild and in 1817 became a Master gun maker in the guild. Although he was a member of the Vienna gun makers guild from 1810 to 1836 it can not be documented that he lived and worked there during that time. Apparently he was civic minded and in 1840 and 1848 he was the sworn estimator or treasurer (Schätzmeister) for the K. K. Landespriv and Bürger.

Franz Contriner of Vienna was the son of Johann and the brother of Joseph and was also born in Assling in Tyrol. He began teaching as early as 1811 and became a master gunmaker in 1838. In 1839 he won a Merit Medal of Honor at a Trade Exhibition. In 1840 he was located at Schmiedgasse 151 and worked and lived with Johann Baptist Contriner who it is assumed to be his brother. In 1841 the workshop was in Leopoldstadt at Praterstrasse 526. In 1845 he advertised that he “Manufactures all types of Hunting and Target guns and is particularly recommended for his newly invented Travel Pistols (Revolvers?)” In 1848 he was located at Praterstrasse 518 and documents state ” privilege and not only manufactures simple, but two, three, four, five, six and also eight shot pistols” (revolvers?). In 1856 at Leopoldstadt, Jägerzeile 44. In 1858 atJägerzeile 44 and also at Praterstrasse 44 as “formerly Joseph Contriner”. In 1858 at Jägerzeile 44 and was the “Commercial Court Appraiser and sworn Treasurer”. In 1865 at Kärntnerstrasse 45, in 1868 at Annagasse 9 as “Gunsmith and Treasurer” and in 1878 at Ottokar Festgasse 13.

Johann Baptist Contriner– of Vienna Came from Assling, Tyrol, born in 1816, the son of Johann Contriner, brother of Joseph and perhaps also franz and the father of Carl. Became a Meister gun maker in 1825. From 1833 to 1849 at Rossau, on Schmiedgasse 151 with a workshop at Naglergasse 291.

The following images are from Jaroslav Lugs book Hand-Feuerwaffen Vol. 2, from 1956.

The following image is from the Color Treasury of Firearms 1976. 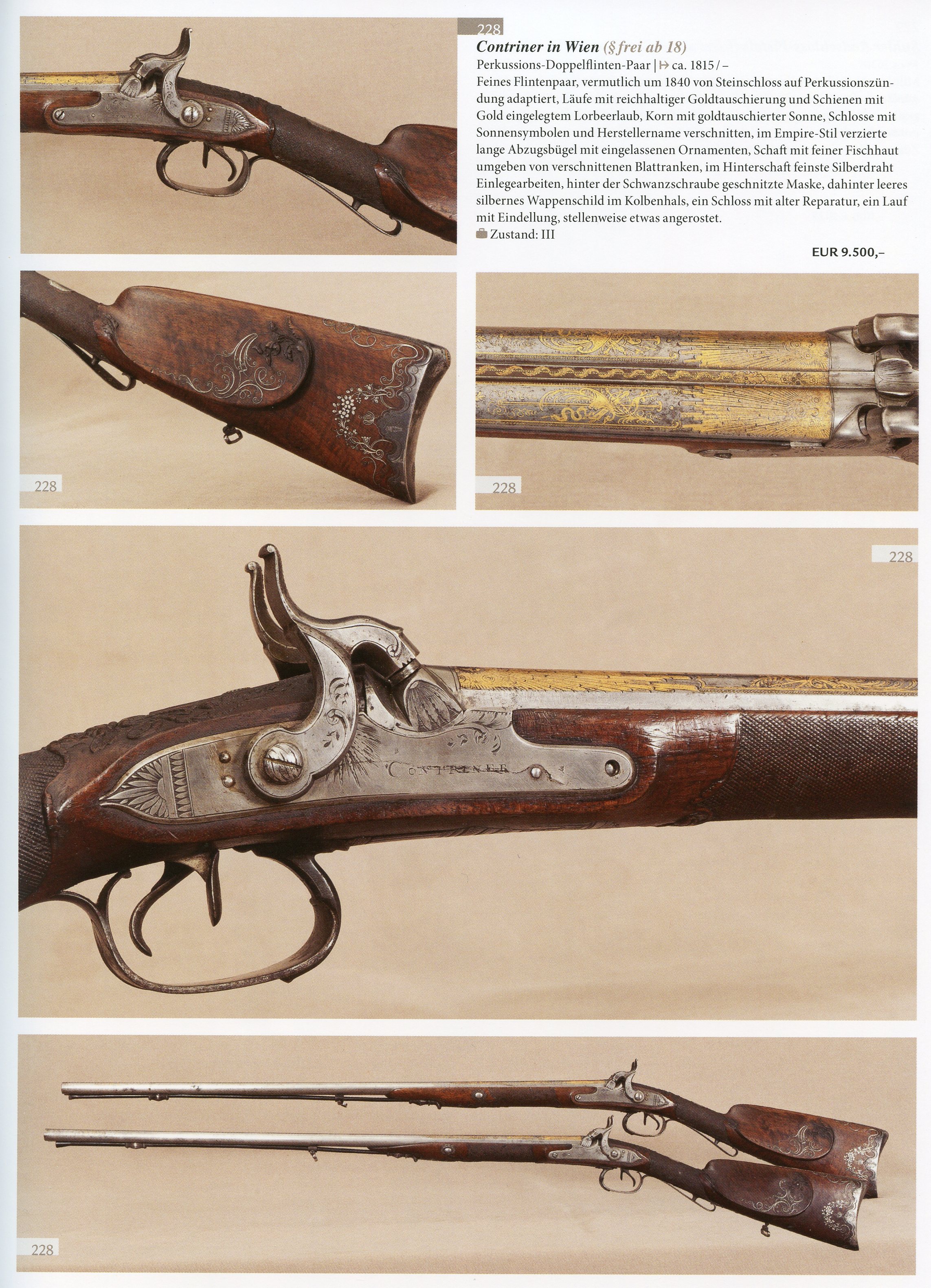