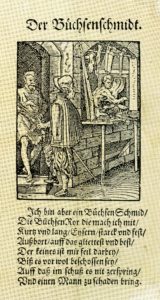 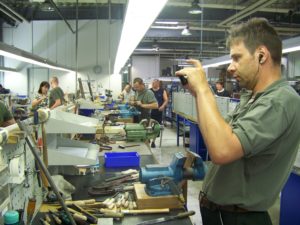 Most of the traditional bolt-action rifles and combination guns are still made today, but the following changes and trends are apparent:

Prices of German factory made guns are in general higher than equal models in the United States but usually offer more custom features. Guns made to order by some factories and the smaller makers are as a rule quite expensive, but not nearly as pricey as best English guns.

Bolt Action Rifles made in the bigger factories have mostly switched to designs that have the bolt lock directly into the breech end of the barrel, a design that was patented by Louis Schlegelmilch at the Spandau Arsenal in 1889. This design makes it possible to quickly install a barrel in a different caliber, on some without the use of any tools. These rifles are also very suitable as takedown rifles that today’s world traveler appreciates.

Very fine custom-built bolt-action rifles are available from various smaller makers that cater to all wishes a customer might have. Most use Mauser 98 type actions, but declining numbers of military surplus actions. Instead, they tend to choose reproduction Mauser actions with custom features like square bridge receivers, hinged floor plates, three position side-swing safeties and a great variety of scope mounts, including the German claw mounts. They are made for the lightest to the very heaviest big bore calibers.

New safeties and triggers for bolt action rifles are designed for greater reliability, where wing safeties are locked in the safe position and single set-triggers un-cock themselves when the bolt is opened. One of the latest designs has a separate cocking mechanism built into the bolt that allows the rifle to be carried in an un-cocked condition and cocked quickly when ready to shoot.

Drillings and Combination Guns are still available in the various barrel configurations of the older German guns. However, there is considerable improvement in strength of the actions and barrels through the use of modern steels, allowing heavy magnum calibers. Old and proven strong locking devices that were very expensive in the good old times have been re-discovered and can be produced more economically on modern computer-controlled machining centers.

A big bore African caliber can now be combined with a 3”-20 Ga, shotgun barrel, giving the dangerous game hunter an additional shot with a rifled slug that has stopping power. Many of the trigger mechanisms are now much safer because of the separate cocking features. Another major improvement are floating rifle barrels.

The owners of traditional, older guns know that the impact of the rifle bullet will climb as the rifle barrel on a soldered barrel assembly gets hot. A floating rifle barrel on modern Drillings prevents this. A built in regulating mechanism at the muzzle of a double rifle Drilling makes regulation and re-regulation a whole lot easier and will not require rebluing of the barrels. It must be said, however, that the appearance of some modern Drillings when compared to the old timers has suffered, but beauty is in the eye of the beholder.

Vierlings are still made but are hard on your pocket book. They usually give you an additional small caliber rifle barrel that is located in the top rib or between the shotgun barrels. The lock mechanism is much more complicated, weight must be a consideration and the use of an aluminum receiver might be advisable, except for very heavy calibers.

Double rifles are offered by the Blaser, the Heym and the Krieghoff Companies and by the few remaining small makers in Suhl. Better steel, stronger locking mechanisms, barrel regulation devices and separate cocking mechanisms make these guns very practical and reliable for the big game hunter. The Ziegenhahn Company in Zella-Mehlis can build a fine box lock or side lock double rifle that compares very favorably with the best made in the world.

Traditional German over and under shotguns are still made in the traditional way by the Merkel company and by a few small makers in Suhl, using the Kersten locking mechanism and minor improvements.

Max Ern makes over and under guns with a unique rising bite bolting system.

The Krieghoff K-80 over and under shotgun, developed and improved from the Remington Model 32, has captured a great following for use in the field, for skeet, trap and sporting clays. The Krieghoff Company also offers a custom round action side lock shotgun in various calibers that found instant acclaim.

Merkel makes a wide selection of traditional side-by-side and over and under shotguns, both as box lock or side lock guns in various grades, models and calibers.

When it comes to Air Rifles, German-made rifles win most medals in international competition, including the Olympics. Hartmann & Weiss and Schilling make single shot rifles on falling block actions.

In the alphabetical list that follows we combine the listings of German Breech Loading Hunting Gun Makers and Dealers, both former ones as well as those still in business today. This list will eventually be very long, especially the one about former Gun Makers. We will concentrate our efforts on those makers and dealers where good information is available.

To find a dealer or gun maker by first name or company name, scroll down through the alphabetical listings.

To open additional information, articles and photos in our archive about a certain maker or dealer, click on Archive.

Stop back to see new listings that will be added as quickly as we can and as new information becomes available. Additions and corrections are welcome. We do not have the time to answer many inquiries and suggest that you first patiently try to find answers in this website.

Scroll Down on Alphabetical List of Gun Makers – Manufacturers – Dealers 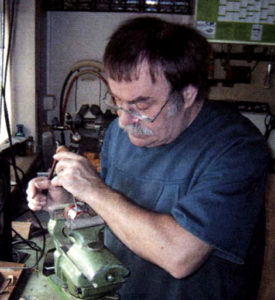 Emil & Claus Willig, Master Engravers
Schweinfurt, GermanyNot many of you who visit this web-site have ever heard of the two engravers with the last name Willig, and this for good reason. Until very recently engravers of German hunting guns were not allowed to sign their work, and the same was true for guns made in other countries includingEngland. This applied also to engravings by Emil and Claus Willig.Emil Willig learned to engrave in Suhl, the former German gun making center where he worked for the Franz Jaeger (Jäger) Company, most likely under the master engraver Voelker (Völker). Emil Willig left Suhl in 1928 because of the hard times the gun makers in Suhl experienced and 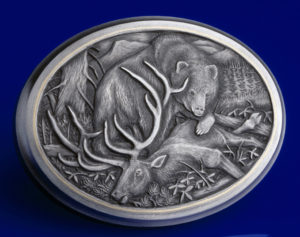 moved toSchweinfurt to work for a major ball bearing company. Only in about 1949 did Emil Willig start to engrave guns again because the factory was closed under American occupation. At this time Germans were not yet allowed to own guns, but the American servicemen who liked guns and gun engraving became the first customers. The story is told in great detail, including that of his son Claus, in an article in our Archive (Nr.111-T ).If you own or have seen an engraved gun with the inscription “Kurt Jäger–Mainz” or “Paul Jaeger–Jenkintown”, 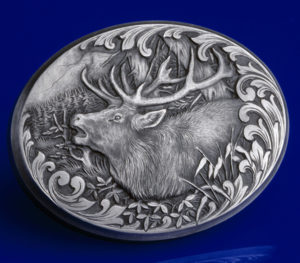 most of them were engraved by one of the two Willigs. Only some of the engravings with mostly oak leafs were engraved by the Zella-Mehlis engraver Schildbach. whom we will list soon.
Claus Willig retired only a short time ago due to health problems. His last works were some of the grip caps that are shown on the right and are still available to those who appreciate these excellent examples of his work by contacting him at <claus.willig@t-online.de>
Many floor plates for Mauser, Springfield and Winchester Model 70 rifles, most of them with silver 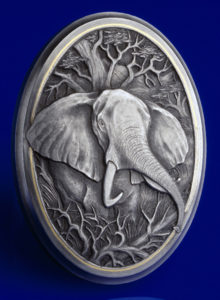 or gold inlayed animals and borders were done over the years, and it is amazing how low their prices were. Examples of Emil and Claus Willig’s engravings can be seen in a photo gallery in our Archive (Nr.52-PG).When the American gun maker David Miller suggested to Safari Club International the creation of five outstanding rifle called “The Big Five” as a fundraising effort for the conservation of African Animals and they agreed to sponsor it, David Miller built the first rifle, the “Elephant Rifle”, and the last rifle, the “Leopard Rifle. The second rifle, the “Rhino Rifle” was built by Champlin Arms and the third rifle the “Buffalo Rifle” by the Heym Company in Germany. For the fourth rifle the “Lion Rifle”Paul Jaeger Inc. in Jenkintown Pa. was chosen, and it is on this rifle that Claus Willig did an outstanding engraving. A detailed description of the 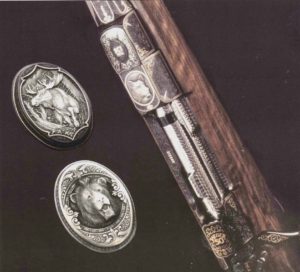 rifle and its creation can later be found in the Paul Jaeger story after it is completed.. You will find the announcement and photos of this outstanding rifle in our Archive (Nr.53-PG).When Paul Jaeger Inc. built yet another fine rifle, this time for fund raising by the Foundation For North American Wild Sheep, it was once again Claus Willig whose outstanding engraving elevated this rifle to a masterpiece. An article written in German but with very good photography of this rifle is also in our Archive (Nr.112-T). 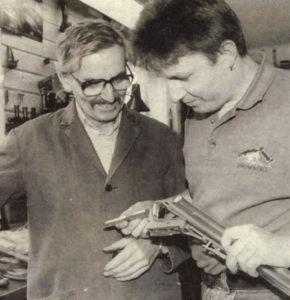