By Axel Eichendorff with additional material by Larry B. Schuknecht

The following article originaly appeared in vol. 62 of the Waidmannsheil, the journal of the German Gun Collectors Association and is used here with the kind permission of both Axel Eichendorff the author and Richard Hummel the editor of the Waidmannsheil.

While studying old German gun and cartridge catalogs one stumbles over advertisements for “Tesching” or “Teschingpatronen”. A Tesching, what is it? The term Tesching is now virtually unknown even in Germany, but it’s got a rather long history. Various spellings like Tesching, Techin, Tschinke were in use over the centuries. It is probably derived from Teschen, the German name for the Bohemian Silesia town, now named Ciescin for the Polish half, Ceski Ticin for the Czech one. An early gunmaking center, Teschen was renowned about 1600 for a distinctive type of Wheelock rifle. Currently the spelling Tschinke is reserved for those Wheelock rifles, regardless of place of manufacture. The photo shows a short-barreled, but otherwise typical tschinke from the Suhl Waffenmuseum in Suhl, Germany.

Below are two long barreled Tschinke Wheelock rifles that appeared on the cover of the October 1970 American Rifleman magazine. 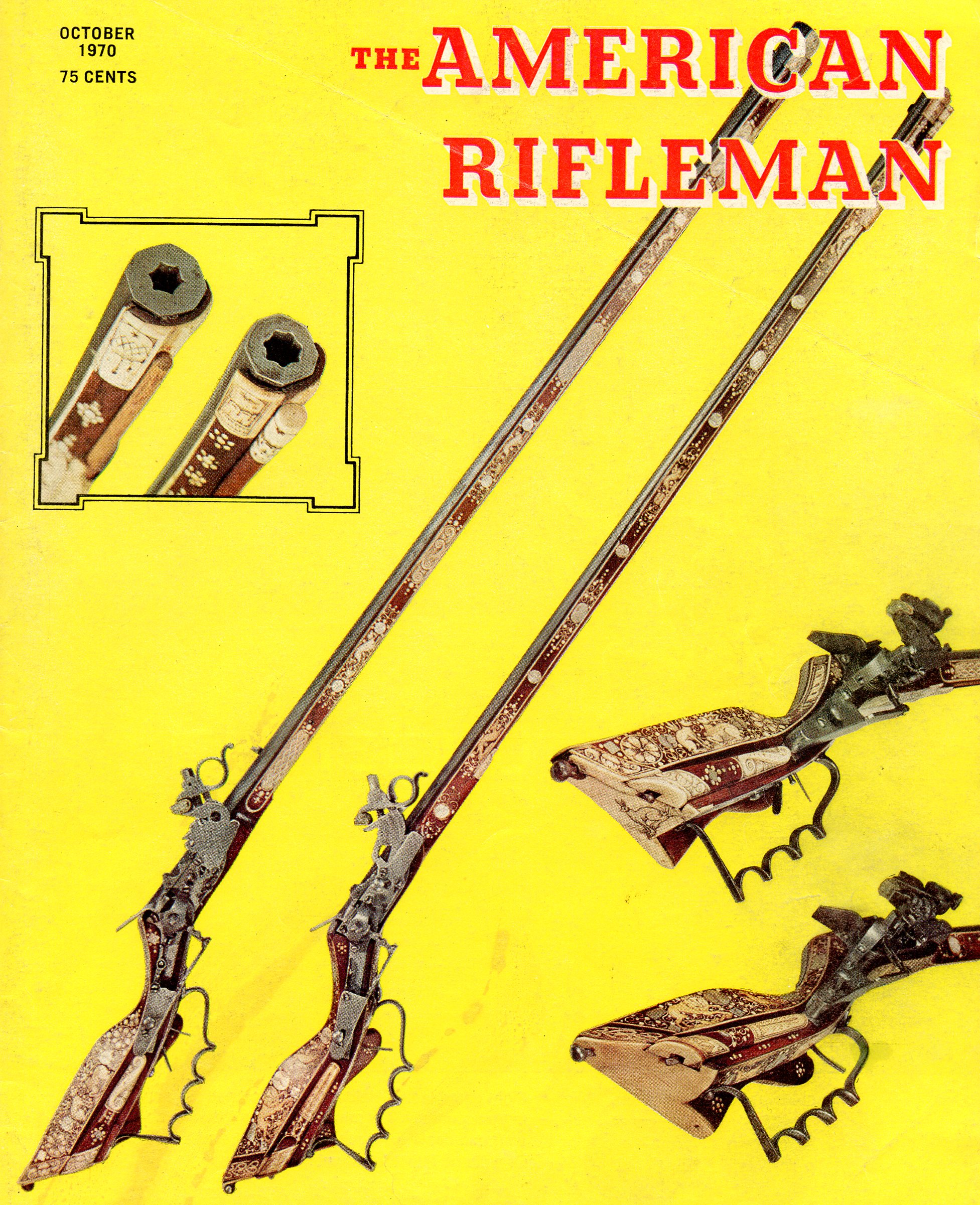 Tschinke features are-A comparatively small bore of .35 to .50 caliber rifled barrel, The Wheelock featuring wheel, mainspring and chain mounted on the outside of the lockplate. Distinctive shape cheek buttstock. Wheelock rifle stocks were not meant to be shouldered. They were merely steadied against the shooters cheek for aiming. After Wheelocks went out of use, the term tesching continued in use for small bore, small game rifles. So the American flintlock Pennsylvania and percussion squirrel rifles would have been called Teschings in Germany.

With the advent of breechloading and the metallic centerfire cartridge came the golden age of Teschings and Tesching cartridges. It lasted for merely two decades, from the 1870’s to the 1890’s. Nothing was standardized then, so many gun and cartridge makers developed their own proprietary small game and plinking cartridges using blackpowder and lead bullets. At the same time the British developed their Rook and Rabbit Rifles, also using small pistol sized cartridges and serving the same purposes like the German Teschings. Many of the British Rook and Rabbit rifles as well as the German Teschings were simple break open single shots. But in both realms other actions, similar to the contemporary military ones, were popular too. While the British used small Martini actions, German Teschings are often found with small, simplified copies of the single shot Mauser M71 action. Such Teschings were a staple of the Zella-Mehlis gun trade. As late as 1902 the Oscar Will- Venus Waffenwerk firm’s catalog still listed such Teschings as “Mauserbüchsen” or tiny Mauser rifles.

During the blackpowder times the small teschings and Rook and Rabbit cartridges had advantages to the contemporary .22 rimfires. The larger bores, .25 to .38 were easier to keep clean and lasted longer. The expensive centerfire brass cases were cheaply reloadable with tiny amounts of black powder and home cast bullets. Bullet moulds were even included in the price of such a Tesching.

After 1900 the perfection of the cheap .22 long rifle cartridge brought the end to both the British Rook and Rabbit rifles and the German centerfire Teschings and their cartridges. The cheap .22 LR cartridge filled the role of the Tesching and Rook and Rabbit numbers for most users. Only a few of the Tesching class cartridges, now loaded with smokeless powder survived for some time in Schonzeitbuechsen or off season rifles. The 1902 Will catalog still offered such rifles chambered for the 8x36R, 9.5x47R Tesching cartridges, but rifles so chambered had already disappeared from the 1908 Akah catalog. Only rifles in 5.6x35R Vierling aka .22 Winchester c.f., 6.5x27R, .32-20 Winchester and the common 8.15x46R chamberings remaining of the Tesching class small game numbers.

Now the Tesching monicker was transferred to the cheap, single shot rinfire rifles every farm boy once had. It remained in colloquial use for such plinkers until WW2 but is almost forgotton now. 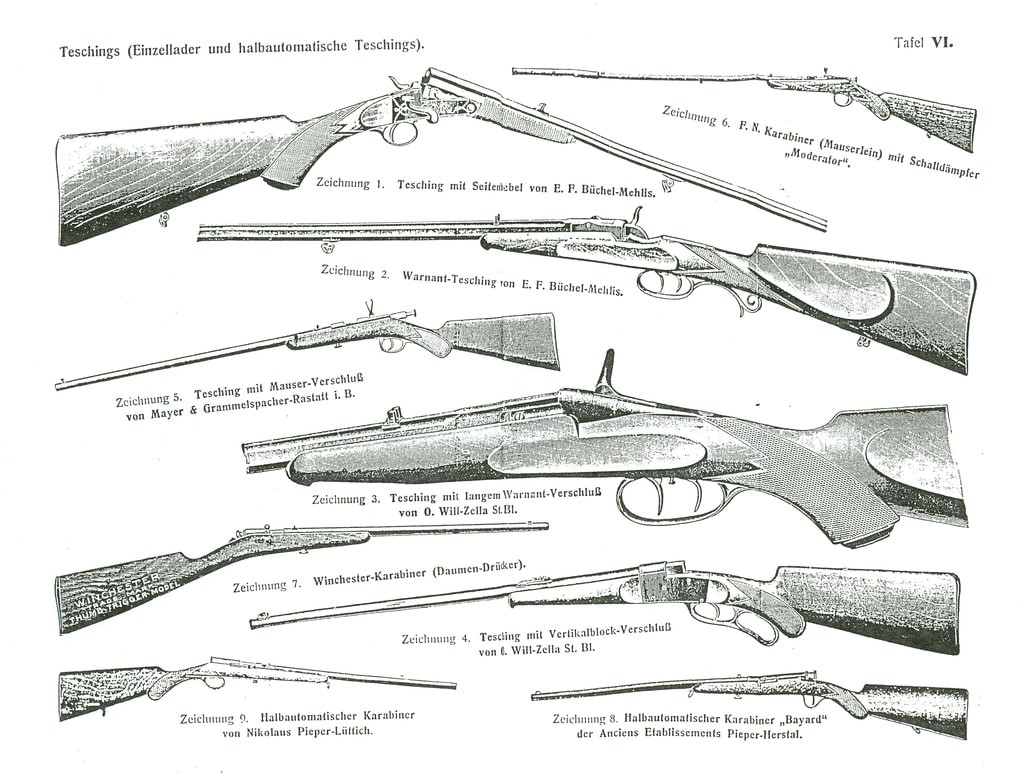 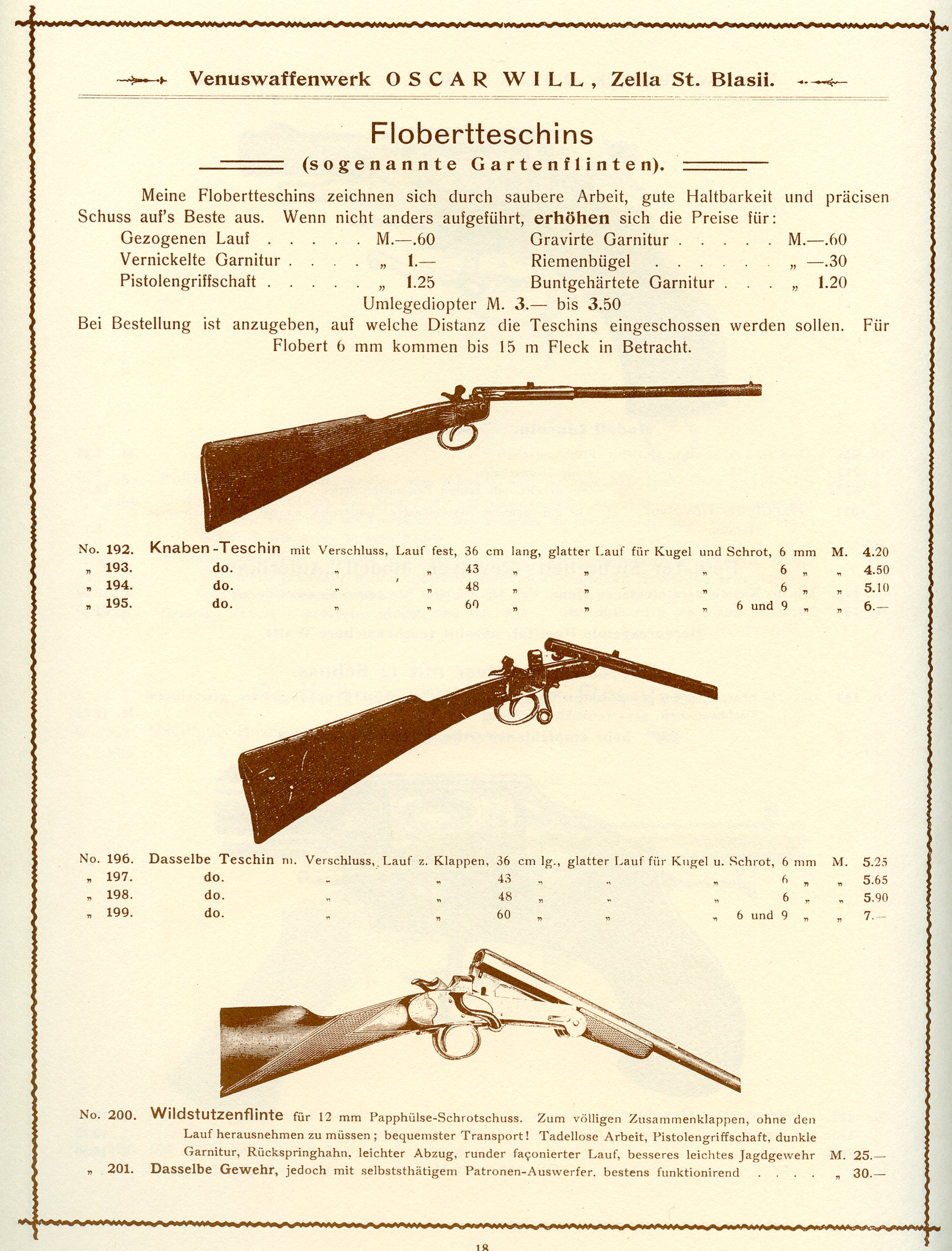 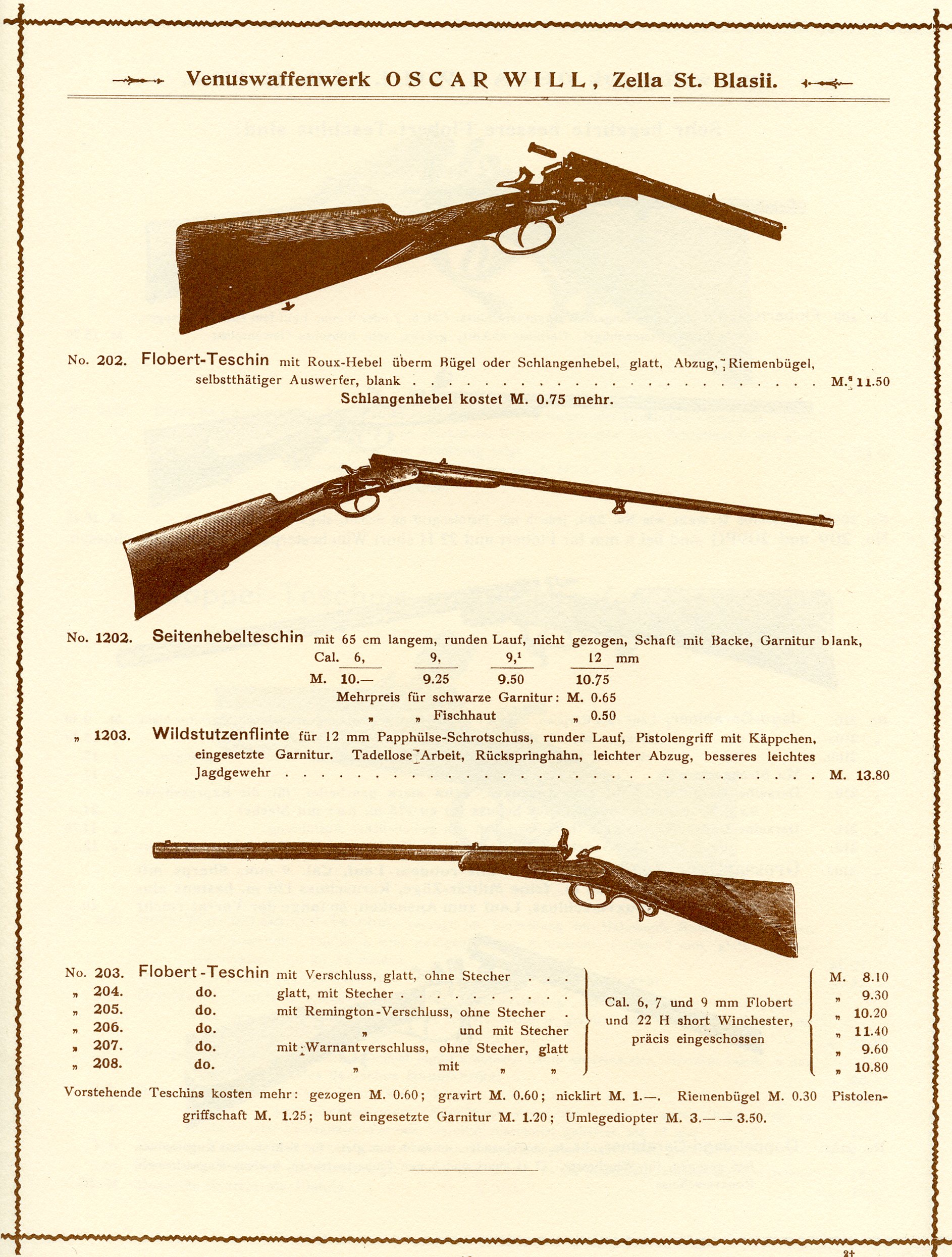 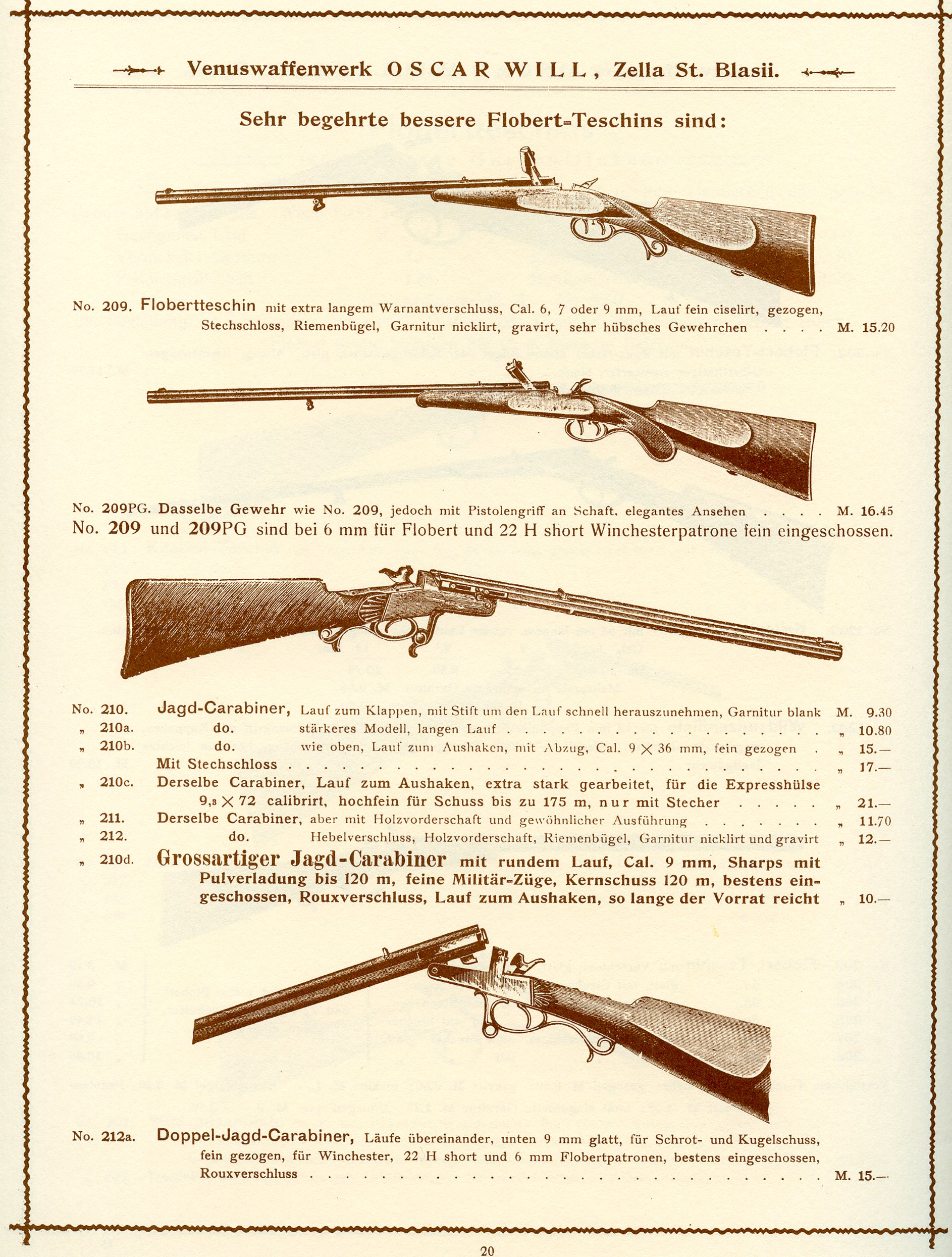 Following are three pages from circa 1910 August Stukenbrok catalog showing Teschings they were offering. 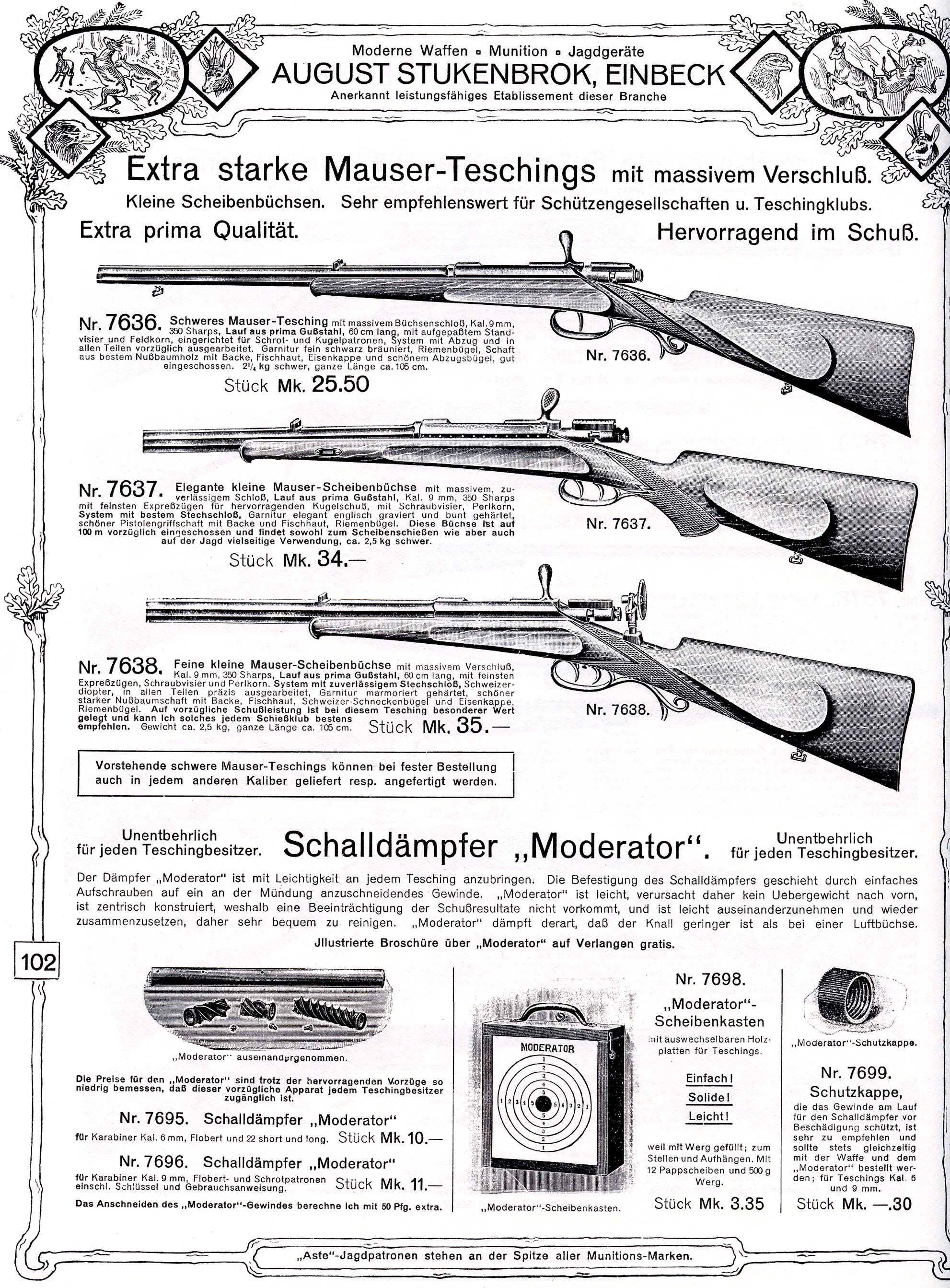 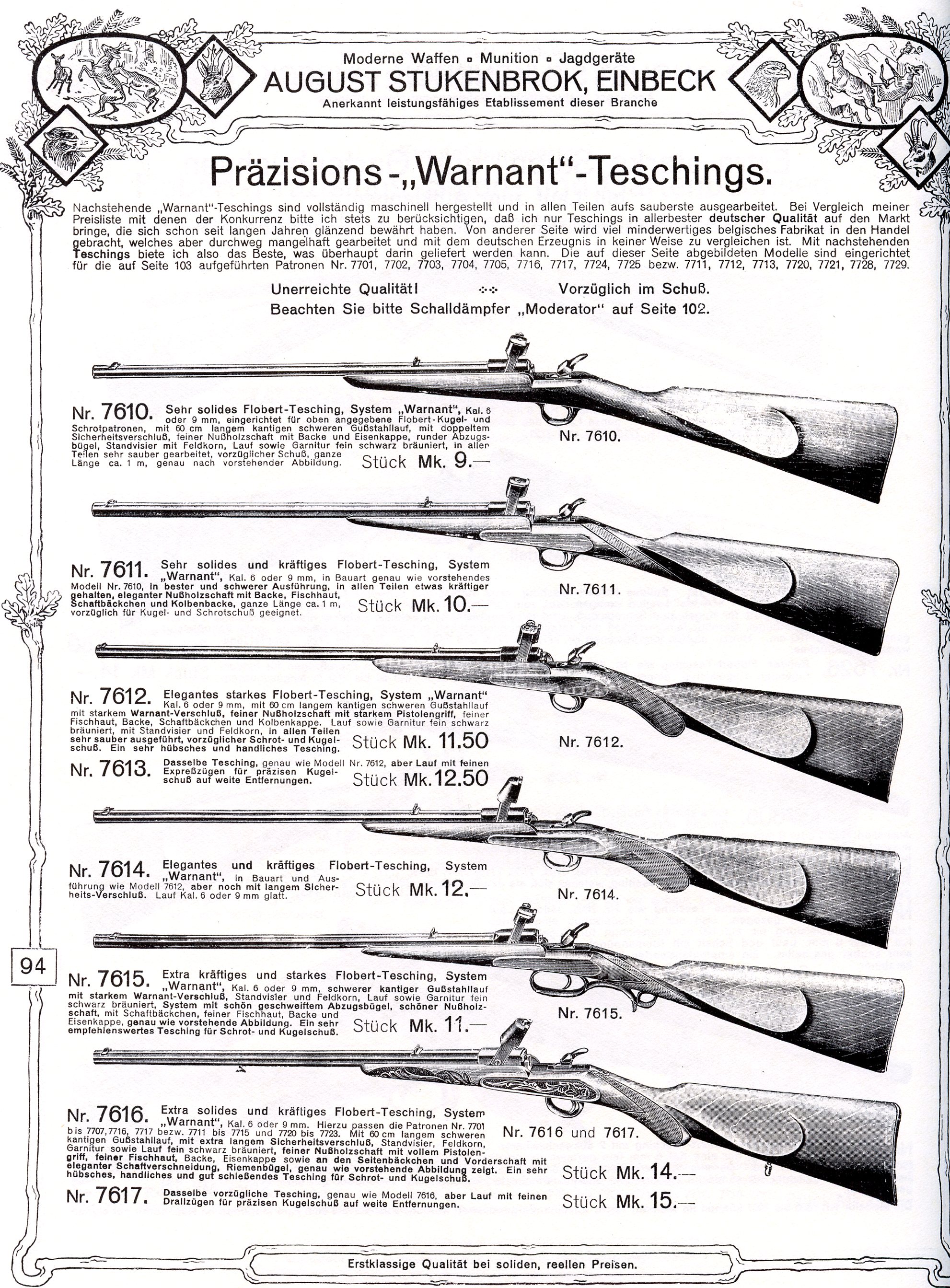 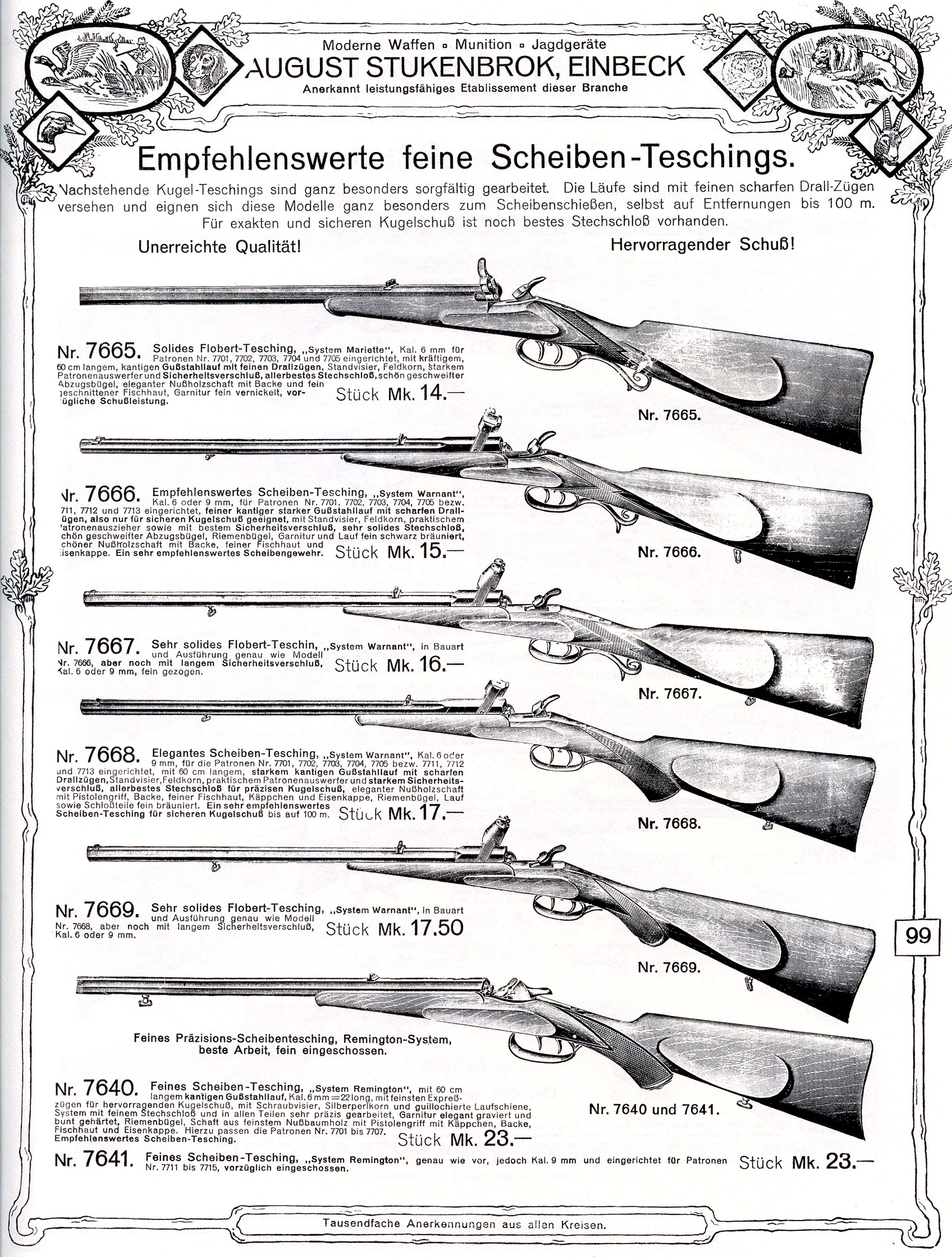